MG Motor will be giving a mild facelift to Hector next year. The updated Hector in its test mule has been spotted on a number of occasions previously. Now, the facelifted Hector has been spied completely undisguised during its TVC shoot. Hat tip to automotive enthusiast Karthik Raj for sharing the spy shots.

MG Motor is planning to launch Hector facelift in January 2021 in India. Considering the current Hector was launched in July 2019, Hector is receiving a makeover sooner than most other cars in the country. Although, the makeover is limited to a handful of cosmetic changes only.

For starters, the most notable change one can notice is the revised front grille with black mesh and satin grey surrounds. The chrome outlining on the grille which extends to the headlamps is seen on the rebadged Hector sold in South American markets as Chevrolet Captiva. It is likely to receive new 18-inch alloy wheels instead of 17-inchers which frankly made did not look good on Hector, considering its huge size.

At rear, it gets a new black garnish with a thick chrome underline which connects the two tail-lamps. Currently, the SUV gets a red stripe running horizontally between the taillights with a thin chrome strip in the middle. Apart from these minute updates, no tinkering has been done to Hector’s exterior design.

While there are no detailed images of the interiors, the lone spy shot of interior confirms that it will sport a dual-tone theme with a different set of upholstery; like its bigger sibling- Hector Plus. Additionally, one can expect a few feature additions such as an updated iSmart connectivity suite and an auto-dimming rearview mirror.

Other feature offerings such as a 10.4-inch vertically oriented touchscreen, powered tailgate, automatic climate control, a dual-pane sunroof, rear AC vents and more are expected to be carried over from the current model. 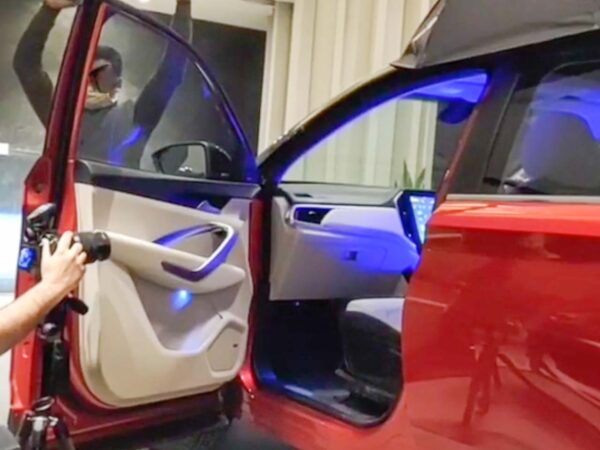 Coming to its powertrain, in all likelihood it will offer the same set of engine and gearbox options as in the current iteration. This includes a 1.5-litre turbo petrol engine and a 2.0-litre turbo diesel unit sourced from Fiat. The former cranks out 141 bhp and 250 Nm of peak torque while the latter kicks out 168 bhp and 350 Nm of peak torque. The petrol mill can also be had as a mild-hybrid setup.

Transmission duties will be carried out by a six-speed manual as standard in both units whereas a 6-speed DCT automatic option is available only with the petrol unit. Upon its launch, it will continue to rival the likes of Tata Harrier and Mahindra XUV500. Prices of the facelifted Hector may receive a nominal hike with the current model offered at a starting price of Rs 12.84 (ex-showroom).