MG Motor is leaving no stone unturned in making itself one of the front-running automotive brands in India. After a successful run with its maiden product in India, it has now expanded to four products in its portfolio. Its latest offering in the form of its flagship full-size SUV- Gloster has already been sold out for this year.

Now the Chinese-owned British brand is eyeing to give Hector a small visual update. The facelifted model had earlier been spotted testing a couple of months ago. Recently, test mules of Hector facelift have been spotted yet again, this time in Vadodara near MG Motor’s facility in Halol, Gujarat – credit to youtube channel Barodian boy Jatin. 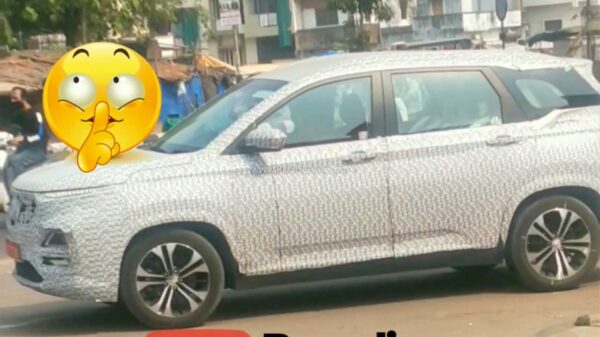 In its latest avatar, Hector will be receiving a handful of cosmetic updates such as a new radiator grille with black mesh and satin grey surrounds. Although the chrome outlining on the grille, the vertically split headlamps design, the front bumper, etc., will be the same as the pre-facelift model. On sides, we get to see freshly designed dual-tone alloy wheels. Other than this the side profile is very much similar to the current model.

At rear, it gets a new black garnish with a thick chrome underline which connects the two tail-lamps. Presently, the SUV gets a red stripe running horizontally between the taillights with a thin chrome strip in the middle. Apart from these, there are no updates on the exterior. 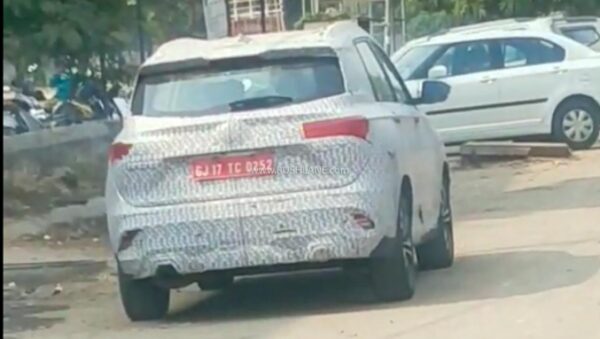 Interiors of the SUV are expected to be slightly redesigned with a different set of upholstery. Also, a couple of new features might get added, for instance, an updated iSmart suite. Other features offerings such as a 10.4-inch vertically oriented touchscreen, automatic climate control, powered tailgate, rear AC vents, a dual-pane sunroof, power adjustable driver’s seat, etc. are expected to be carried forward from the current iteration.

Speaking of its powertrains, it will continue to be offered with two engine options- a 1.5-litre turbo petrol unit and a 2.0-litre turbo diesel unit sourced from Fiat. The former churns out 141 bhp and 250 Nm of peak torque whereas the latter returns an output of 168 bhp and 350 Nm of torque.

The petrol motor can also be had with a mild-hybrid unit. Transmission options include a 6-speed manual gearbox as standard for both units and a 6-speed DCT automatic gearbox is also offered with the petrol engine. Diesel Hector automatic is also expected to be launched with the facelift next year.

MG Hector will be receiving a mid-life facelift a lot sooner than most other cars in India. But given the competition in the compact SUV segment, it might be the British brand’s strategy to rack up more sales. It is expected to launch in India sometime next year and may receive a nominal price hike. The current model is offered at a starting price of Rs 13.99 lakh and goes up to Rs 17.88 lakh, ex-sh.