Nissan had been facing a stiff time at the Indian market for some time now, while market conditions in overseas countries haven’t been too favourable as well. In India, it addressed the problem by launching a subcompact SUV Magnite at the price of a hatchback.

The company realises that since SUVs and crossovers are the current rages in global markets, an updated Kicks fits the bill completely. After launching the Japan Spec Kicks earlier this year, Nissan has now revealed US-spec Kicks crossover.

Japan-spec Kicks is almost similar to the now unveiled US-spec Kicks. This facelifted Kicks is based on a different platform, unlike the current India-spec which is based on the old Duster’s platform.

The side and rear profiles are largely similar to the outgoing model. In fact, the side profile is almost identical to its predecessor with plastic claddings on bulging wheel arches and a floating roof with integrated roof rails complemented by a backed-out C-pillar. That said alloy wheel design might be different. At rear, it gets boomerang-shaped tail lamps, a revised boot lid and a slightly reprofiled rear bumper which gives a refreshing sporty look.

On the inside, it sports a dual-tone theme with a redesigned dashboard and premium upholstery. AC vents have been repositioned. It features a larger 8.0-inch touchscreen infotainment system with smartphone connectivity and Nissan Connect suite. Other notable highlights inside the cabin are a smaller gear shifter, a seven-inch digital instrument cluster, a flat-bottom steering wheel with mounted controls and lots more. 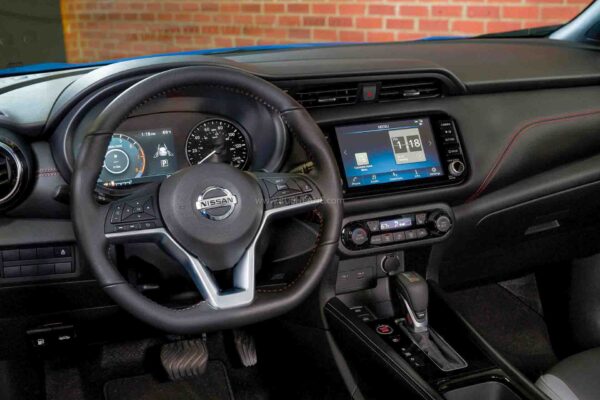 In Japan, Kicks is powered by state of the art Nissan’s e-Power hybrid system. This powertrain includes a 1.2-litre petrol engine which derives its power from a 1.57 kWh battery placed under the front seats. The car’s main source of power is an electric motor paired with a 95 kWh battery pack which puts out 127 bhp and 260Nm of peak torque.

Unfortunately in the US, it is powered by the same petrol 1.6 liter engine option, which has been on sale since the early 2000s. This engine delivers 122 hp and 155 Nm torque mated to an Xtronic CVT gearbox. Price of the new Nissan Kicks for US market has not been announced. It is expected to be revealed closer to launch, which is in Feb 2021. Current Kicks is priced at $19,070 (Rs 14 lakhs) in the US. Expect new Kicks to carry a higher price tag.