Images are credit to Jai Mehra from Kolkata car fanatics group on FB. 2021 Rolls Royce Ghost made its global debut a few months ago, and now the first unit has already arrived in India. It is expected to be showcased to prospective buyers in India at exclusive events in multiple cities over the coming days. 2021 Rolls Royce Ghost comes at an estimated base price of Rs.6.95 crores, ex-sh.

The 2021 Rolls-Royce Ghost sees a change in design and comes in with increased dimensions measuring 89mm extra in length at 5,546mm while width is increased by 30 mm to 1,978mm and height is up by 21mm over its earlier counterpart. The wheelbase remains the same at 3,295mm with overall weight at close to 2.5 tonnes.

The improved dynamics allows the Ghost to achieve 50:50 weight distribution with the engine mounted behind the front axle while increased dimensions also relate to improved boot space of 507 liters. 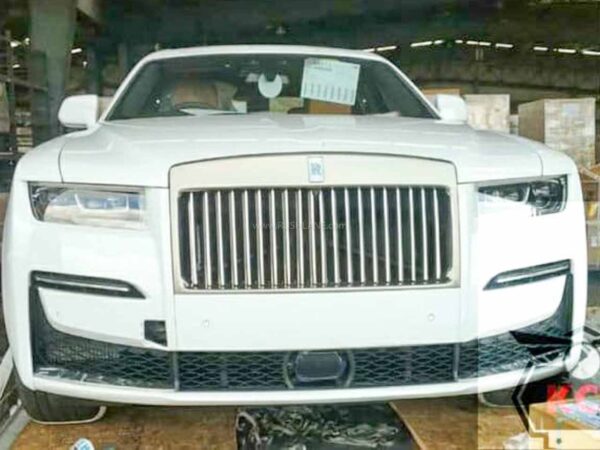 New Ghost uses Phantom’s aluminum spaceframe architecture which also underpins the Rolls-Royce Phantom VIII and the Rolls-Royce Cullinan and design elements include new laser headlamps which have 600mm illumination range, C shaped LED DRLs, and a new front bumper. Its side profile does not see much change in design while changes to the rear are only restricted to new square shaped tail lamps. The new Ghost also gets Rolls-Royce’s Magic Carpet Ride with a new Planar Suspension Setup.

Interiors see enhanced features with occupants offered the best in ride quality and comfort and improved suspension uses the 360 degree cameras to span the road ahead and transmission uses GPS data to pre select gears in accordance to the road that lies ahead. 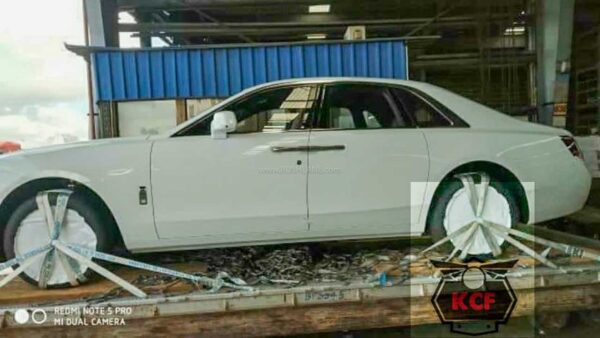 The state of the art interiors also sport 153 LED light set up with Ghost wordmark and over 850 stars on the passenger side of the dashboard and a 1,300-watt bespoke audio system with the Starlight headliner acting as a large speaker.

It gets a micro environment purification system for climate control, head up display, 360 degree camera and adaptive cruise control along with night time wild life and pedestrian crossing alerts. Safety is also seen with alertness assist and auto-park features. Rolls-Royce has also offered a host of customization options so as to allow each of its buyers to get a Rolls-Royce Ghost different from the rest.

The second Gen Rolls-Royce Ghost is powered by a 6.75 liter, twin turbo V12 engine as against a 6.6 liter V12 which powered its earlier counterpart. This new engine now offers 571 hp power at 5,000 rpm and 850 Nm torque at 6,000rpm. 2021 Ghost gets a four wheel drive system taking the place of the rear wheel drive set up seen on the previous gen Ghost; relating to better maneuverability and handling.

Despite its overall weight of 2.5 tonnes, the new Ghost can accelerate from 0 to 100 km/h in 4.8 seconds and can hit a top speed of 250 km/h. The new Rolls-Royce Ghost deliveries in India are expected to begin next year.