Tata Gravitas, a 7 seater SUV from Tata Motors was showcased at the Auto Expo 2020. Its launch was expected to follow soon after, but the COVID-19 pandemic struck and launch had to be delayed. Then on, the automaker stated that a festive launch was in the offing, but now launch is expected to be further delayed due to a disruption in the supply chain.

As soon as the lockdown was lifted, Tata Gravitas prototypes mules were back on the road for testing. In the last few months, auto enthusiasts in and around Pune have been regularly sharing spy shots of Gravitas test mules on social media. Some even gave us a close look at the upcoming Tata SUV from the inside, as well as outside. 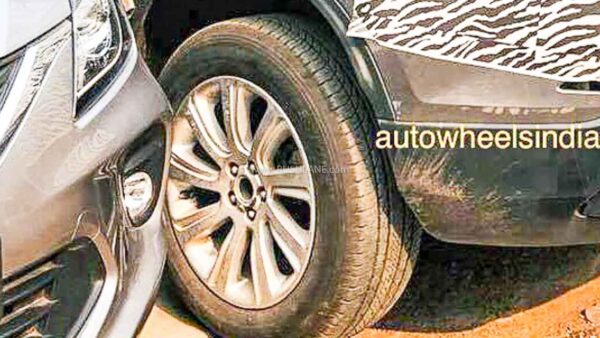 Now, the Gravitas SUV has been spied again, by folks at Auto Wheels India. The latest spy shots reveal a new alloy wheel design, which was not spotted earlier. In the previous spy shots, Gravitas was seen with 17 inch dual tone, machine cut alloys, which are also on offer with the Harrier.

The new alloy design of Gravitas, seem to be inspired by 2021 Range Rover SUV. These new alloys, also look like they are larger; 18 inch units. These are single tone, 9 spoke alloys, with aluminium finish. 2021 Range Rover is seen with a similar alloy wheel design, as can be seen below.

We already know how proud Tata is, of the Land Rover pedigree. The multiple Harrier ads, their sales and marketing team make sure that everyone knows that the Harrier platform is infact a Land Rover based platform. With Gravitas getting Range Rover inspired alloys, it gets yet another step closer to the Land Rover name.

This direct competitor to the likes of the MG Hector Plus, Jeep Compass and Mahindra XUV500 will be offered in 6 and 7 seater options. It will be the company’s second product to be positioned on the new OMEGA platform and will measure 4,661mm in length, 1,894mm in width and 1,786mm in height, thus making it 63mm longer, 72mm wider and 80mm taller as compared to the Harrier. The Gravitas wheelbase will measure 2,741mm identical to that seen on the Harrier.

The Tata Gravitas, which will go on to become the company’s flagship SUV, has been spied on test though under heavy camouflage. Spy images show off exterior of the SUV with a cascading grille in a honeycomb mesh design, squared wheel arches and roof rails. It receives LED head and tail lamps, side body cladding and a roof mounted spoiler. It also boasts of a large rear windscreen and a massive rear bumper.

The interiors sport a brown and black dual tone colour scheme. Its cabin comforts are similar to those seen on the Harrier with dual tone dashboard, an 8.8 inch floating display with Android Auto and Apple CarPlay, JBL speakers and a three spoke steering wheel. It will also receive a 7 inch instrument panel, Benecke-Kaliko oak brown leather upholstery, cup holders between driver and front passenger seats and utility space under the front arm rest.

Tata Gravitas will get powered via a Fiat sourced 2.0 liter, 4 cylinder diesel engine, the same engine that also powers the Harrier. This engine on the Harrier makes 170 hp power and 350 Nm torque mated to a 6 speed manual and Hyundai sourced 6 speed torque converter. The same power and performance is also expected to be seen on the Gravitas. It also gets Terrain Response System in three modes of Wet, Rough and Normal and three drive modes of Eco, City and Sport.

Considering that the Gravitas is going to be Tata’s flagship car in the foreseeable future, it will come with more features than the Harrier, and could be an even more capable SUV at off-roading. 2021 Tata Gravitas is expected to be launched in a price segment of Rs.16-22 lakhs with its primary rivals in its segment to be MG Hector Plus and Jeep Compass. It will also compete with the upcoming new gen XUV500 and 7 seater Hyundai Creta.

Apart from the Tata Gravitas, the company has two more upcoming launches. The Tata Altroz turbo petrol will be launched first followed by the Gravitas sometime in early 2021 while the Tata HBX is only slated for launch by March 2021.

Tata Motors, having registered sales growth in September 2020 to the extent of 162 percent is eager to maintain this level of sales following several challenging months. The opening up of the economy and upcoming festive season are slated to bring in better sales in the months ahead while the upcoming launches could further boost sales momentum.