Triumph Motorcycles has debuted the final design prototype of the upcoming Trident retro-classic roadster that is scheduled to be launched next year. Showcased at the London Design Museum, the motorcycle’s design is described as a ‘contemporary take of Triumph’s style and attitude‘.

The 2021 Triumph Trident is expected to be positioned as the most affordable product belonging to the manufacturer’s famous triple-cylinder family of motorcycles. It can be clearly seen that the final design prototype shares quite a lot of components with the Street Triple including the most critical one – the engine. 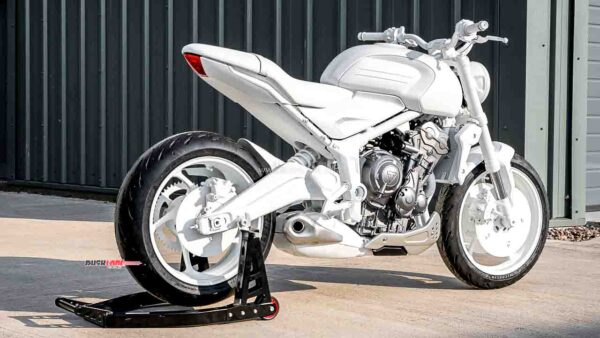 The roadster features a minimalist, uncluttered design characterized by a muscular fuel tank with accentuated knee indents, cantilevered tailpiece devoid of bodywork, circular headlamp (appears to be an LED unit), and a simple digital instrument console. The motorcycle offers a natural upright riding stance typical for a retro-classic roadster.

Triumph has not revealed detailed technical specifications but has confirmed that the motorcycle will be powered by a triple-cylinder motor. We expect the 2021 Triumph Trident to borrow the Street Triple R’s 765 cc liquid-cooled engine. On board the street fighter, the motor is tuned to produce 118 hp and 77 Nm of torque. The top-end RS variant has 123 hp and 79 Nm of torque on tap. Triumph may tweak the engine and 6-speed gearbox to suit the new Trident’s relaxed character. The 47 hp 660 cc in-line three-cylinder engine aimed at European A2 license holders could also be on the cards. 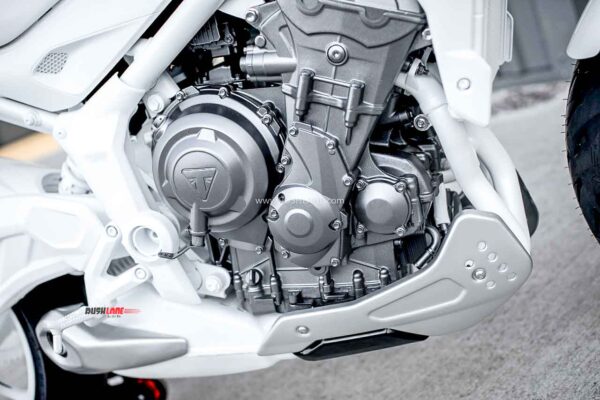 Like its twin-eyed sibling, the 2021 Triumph Trident employs twin-spar aluminium frame. While the prototype features a different rear sub-frame, the die-cast aluminium swing arm has been carried forward from the Street Triple. The USD front forks and rear monoshock, alloy wheels, tyres and braking system are also common to both motorcycles.

The 2021 Triumph Trident is set to hit the showrooms in Europe in Spring 2021. We can expect the roadster to be introduced in India a few months after its international debut. It is likely to be the most affordable Triumph product until the first product out of Triumph-Bajaj gets ready in 2022 with a price tag of around INR 2 lakh. The Trident will take on the likes of Ducati Scrambler.