These creators, who were restricted by budget, have let their imaginations run riot while designing some of the more original motorcycles, some of which have even made it to record books. These handmade bikes, some of which, have taken years to complete, but the final product has instantly risen to fame, appealing to many biking aficionados in the country.

Riddhesh Vyas, from Rajkot, Gujarat has taken 8 years to complete this Ridd superbike. The Ridd sports a 1000cc engine from a Maruti 1000 and Vyas has gone to great lengths to fit the Ridd with a host of handmade custom parts. The superbike measures 9 feet in length and gets raked out front forks. It is also seen with a hydraulic clutch, single side swing arms and swing arm integrated suspension. 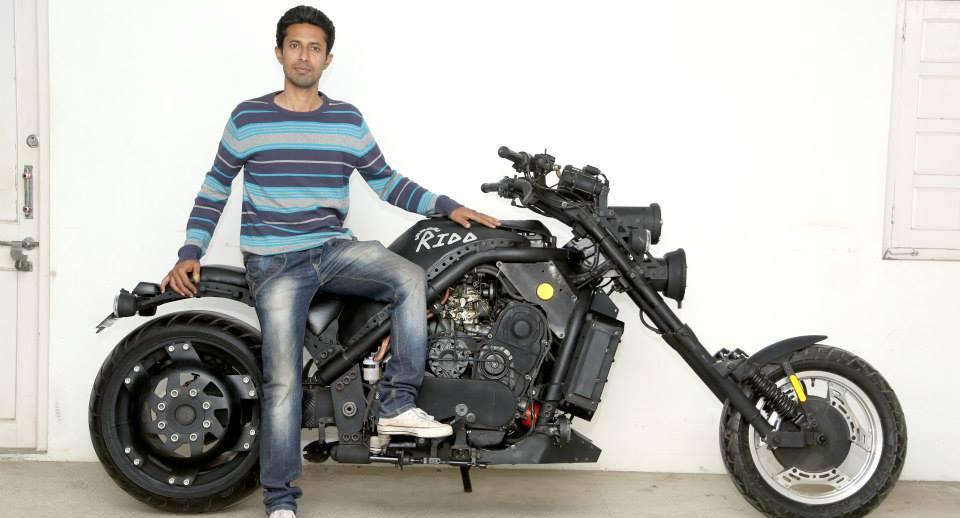 Weighing a total of 400 kgs, Ridd has a top speed of 170 kmph. It has a 4 cylinder engine, 6 speed transmission and a top speed of 170 kmph. Vyas noted all the best features in high end bikes, bringing them into the design of the Ridd. It cost Vyas INR 8 lakhs to build and has gained recognition after Vyas went on to find himself a place in Limca Book of World Records as creator of the first handmade 1,000cc bike in the country. 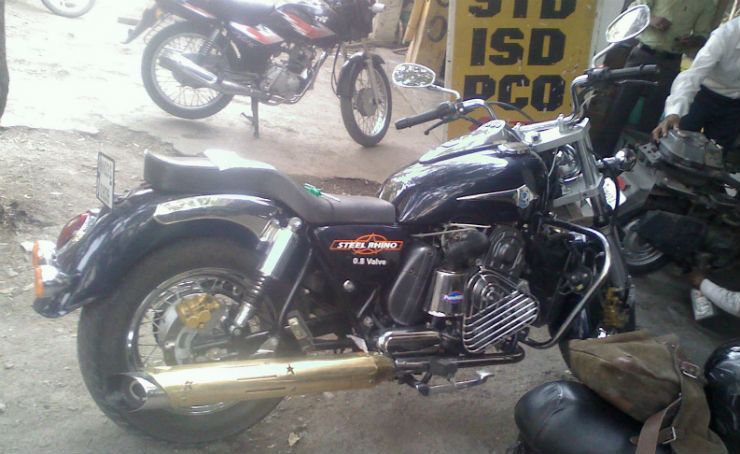 Dehradun based custom house is credited with the designing and modification of a rather unique superbike which is fondly called the Steel Rhino. These modifications were done at a cost of INR 4 lakhs and the bike borrows several parts from both other bikes and cars.

Powered by an engine from a Maruti Suzuki 800, Steel Rhino also gets a chassis and gearbox from the Yamaha RD350. The fuel tank is totally made by hand and sports an innovative new design. The superbike sits on 15” front and 17” rear tyres and added weight is taken care of by quad front shock absorbers. Put to the test, Steel Rhino commands a top speed of 185 kmph.

Jeevanjit Singh of Chandigarh, Punjab has created one of the first handmade superbikes in India which was a part of his college project.

The young engineer has taken the 1.3 liter MPFI engine from a Maruti Gypsy to power this superbike due to which he has named it the Gypsy Superbike. The bike weighs a total of 300 kgs and can travel upto a top speed of 160 kmph. It gets a gearbox tweaked for added performance from the RD350 and frame is inspired by the trellis frame seen on the more contemporary motorcycles. The single side swingarm of the superbike also receives a Tata Safari tyre and all these parts put together ensures that Singh received accolades for the Gypsy superbike.

A group of youngsters who call themselves – Freedom Spirits have created a motocycle called GenNext. The team comprises of five enthusiasts – Abhishek Sharma, Mohammad Ansar, Sarvesh Khemka, Yashodeep Yadav and Ankur Tiwari who have worked on this project. The modified bike looks good and sports cost effective hubless tyres. This version is created at much lower costs as compared to the kits on offer in international markets. 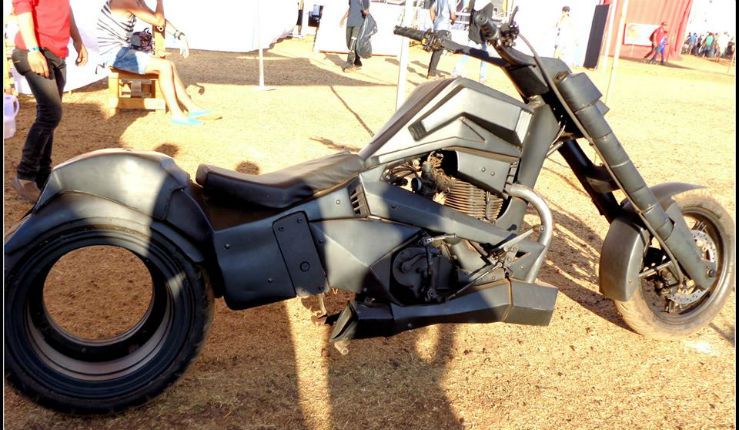 While many will be wondering what Hubless Bikes are, it may be explained that hubless bikes work by affixing rotating parts such as the brake ring, bearings and hubless rim onto the outer side of the non rotating inner ring. These modifications were also seen on the Royal Enfield Lightening 535 with the final product looking vastly different from the original. Body panels were changed and with the hubless kit, the bike extended to a total length of 9 feet. 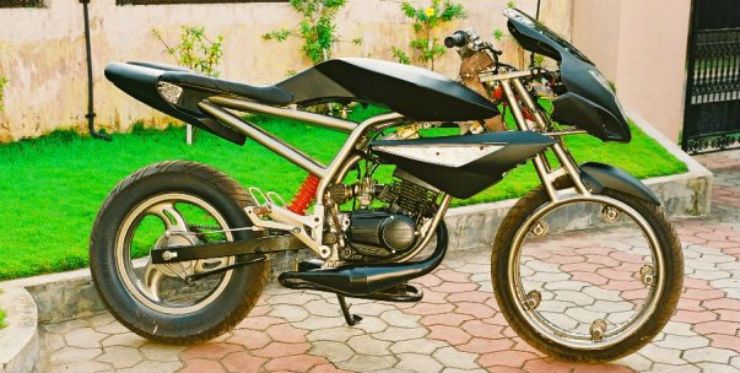 Hubless rear wheel drastically reduced weight of the bike thereby contributing to lower fuel consumption. The bikes have to be tuned for better precision and this can be seen on two such motorcycles in India that have been converted to hubless bikes. These are the Bajaj Pulsar 220 and the hubless Cruiser bike that has been developed by mechanical engineers from the Rudrapur Engineering College in Ujjain. This Cruiser was developed as a part of their college project and it sports hubless wheels both at the front and rear. 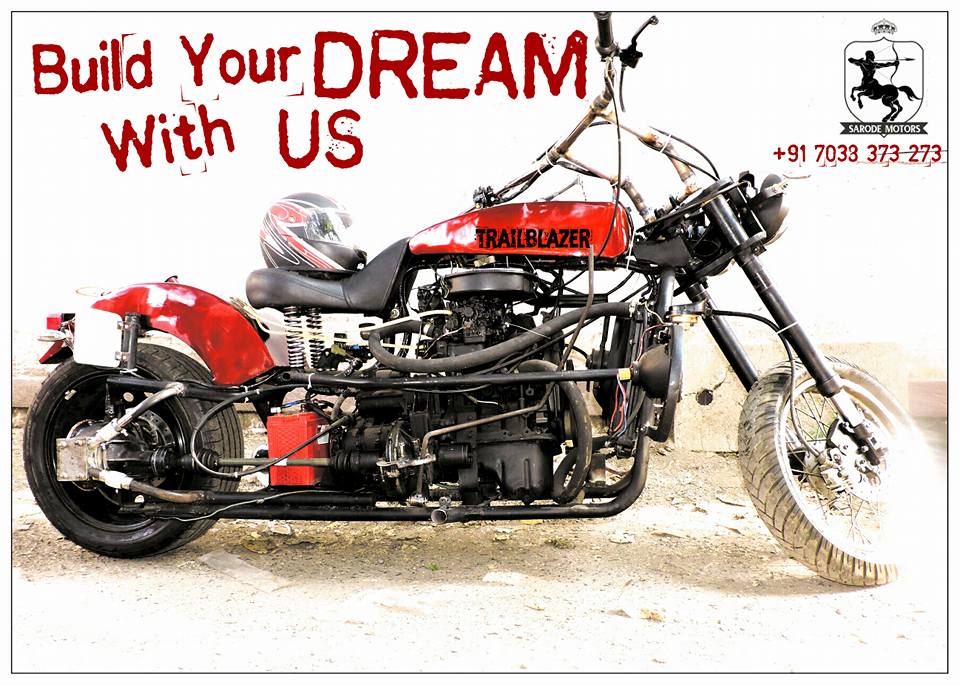 This handmade machine is thanks to bike building prowess of Nilesh Sarode from Pune. Upto 99% of the Trailblazer motorcycle parts are all handmade with some parts borrowed from other motorcycles while the 3 cylinder 45 bhp engine itself is taken from a Maruti 800. This Maruti Suzuki 800 was lying unused in his backyard with the family not wanting to part with the car due to sentimental reasons. Sarode has taken the engine and put it to good use and thus ensuring that the faithful Maruti 800 continues to remain with the family to this day.

Trailblazer gets its front shock absorbers from a KTM Duke and brakes from a Bajaj Pulsar. Its display unit and gearbox is from the Maruti 800. A notable feature on this Trailblazer motorcycle is the location of its fuel tank which is situated on the rear fender. This saves the fuel tank for being heated from the engine. The chassis is specifically designed so that the engine is longitudinally mounted and final drive is a shaft that allows for minimum loss of power. The rear tyre is also taken from a car, sporting a flat profile.

Sarode and his team have taken around 5 months to complete this outstanding machine which weighs a total of 350 kgs. The entire project cost Sarode INR 2 lakhs.