51 Ferrari sportscars destroyed at a Japan dealership due to typhoon

Typhoon Jebi affected all it touched including Ferraris estimated to be worth $9 million (about Rs 65 crores). That’s more than 1 billion Yen. The deluge destroyed almost all cars at the authorised Ferrari dealership at Rokko Island, an artificial island in the city of Kobe.

The report says as the storm surged, 51 of 53 cars at the dealership were destroyed. This included display cars, cars that had already been purchased and thse that were undergoing service. Employees tried their best to protect their treasure by blocking the entrance with sandbags, and tarps but none of it helped. 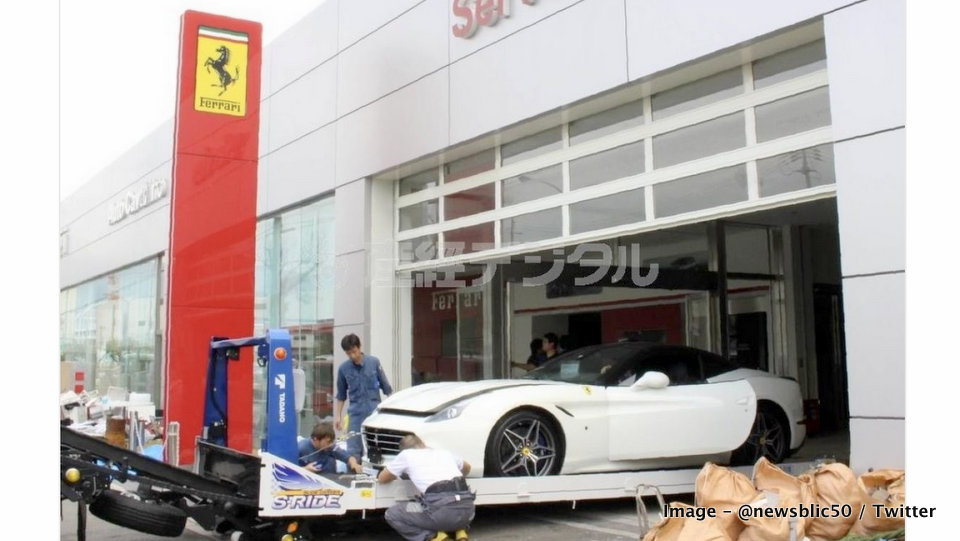 With water rising upto 3 ft inside the dealership and around, salt water seeped into engine bays as standing water rose to a meter. The vehicles have been inspected and are being considered for scrappage. Clearly, scrapping is only the first step of the process, and the dealership is now considering its options.

To recover in some part from the ensuing loss, the distraught and financially crippled dealer principal is looking at any solutions that may come from insurance. The vehicles are in line for dismantling. The payout/compensation recovery process will be one of a kind with such a staggeringly high valuation.

Typhoon Jebi is considered the largest to hit Japan in 25 years. 11 people have died and another 300 were injured. This September brought in winds at 220 km/h, torrential rains and floods. The region is surrounded by sea and swept over vast expanses. vehicles were abandoned for fear of life and ships struck bridges. With a million people evacuated, Kansai International Airport welcomed stranded folks.

In the Nishinomiya region, about 100 cars caught fire. Short circuits cause the are to get charged and with swathes of water in the equation, the electrical systems were compromised.