The price of petrol rose for 16 consecutive days. Then reduced to a paisa after having been mis-presented as 65 paise. The sheer disbelief was astounding, and the many jokes what 1 paise can get you in today’s day surfaced. The pattern however became a regular affair in the last week with price reductions ranging from 1-15 paise. After the dismal 1 paisa relief, numbers continued to be as small, moving from six paise, to seven paise and then 9 paise. Having had enough of the situation, one man decided to return the favour with a 9 paise cheque.

He decided to pass on his 9 paise benefit to the Prime Minister’s Relief Fund. The 9 paise cheque issued through Gayatri Bank check was drawn in favour of the Prime Minister’s relief fund on 04/06/2018. And no, it’s not an error as the amount denoted in words and numerical does match pointing to a ‘take that’ approach.

And while this may have been one individual’s jocular protest, it does bring our attention to the fuel price conundrum. And while matters are in discussion, administration has not yet taken a favourable step.

In the meantime, fuel price has been reduced for the 8th day in a row, in all, it amounts to about 71 paise price reduction. In the 16 days prior, fuel price rose by almost Rs 4, which doesn’t really tip the scale favourably for end users. 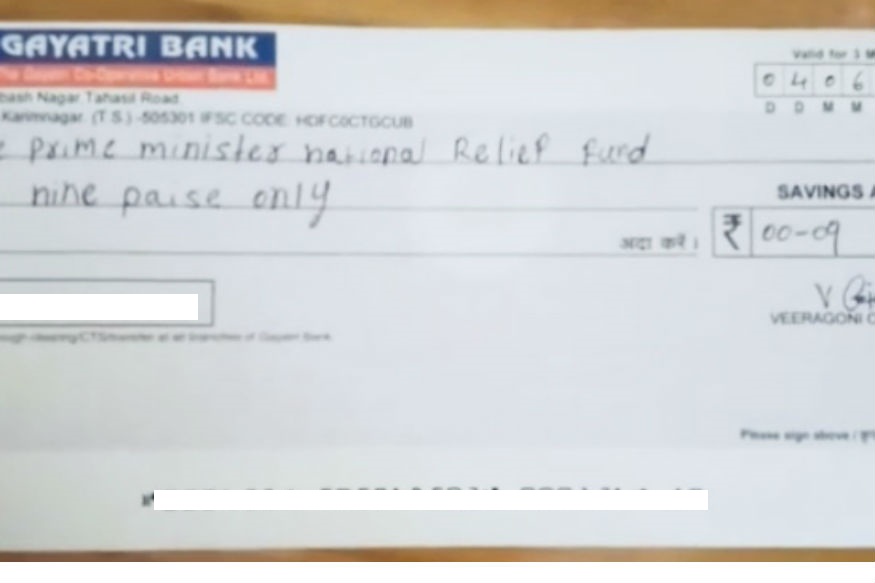 It is sometimes said that the GST Council will be included in the petrochemicals. Never again, something else. A petition has already been filed in court to bring Petrol, Diesel under GST. Until a decision is reached upon the writ petition, one can only hope the fuel price scale doesn’t begin to rise again. This month has also seen auto manufacturers raise prices across the portfolio citing cost increase.

And while the politics of fuel prices continues to play out, one man’s payback makes us think, is that all the difference that was made.