Anand Mahindra, Chairman of Mahindra Group, has replaced the sub 4 meter Mahindra TUV300 and taken delivery of a 9 seater version of the TUV300 which is called TUV300 Plus. His tweet about his new acquisition has drawn the attention of both Mahindra car owners and fans on social media.

Mahindra TUV300 Plus was launched earlier this year. It is an elongated 9 seater version of the sub 4 meter TUV300. It gets a bigger engine and added features while it has been customized specially for Anand Mahindra in a special steel grey metallic paint scheme resulting in Mahindra calling it his “Grey Ghost”. 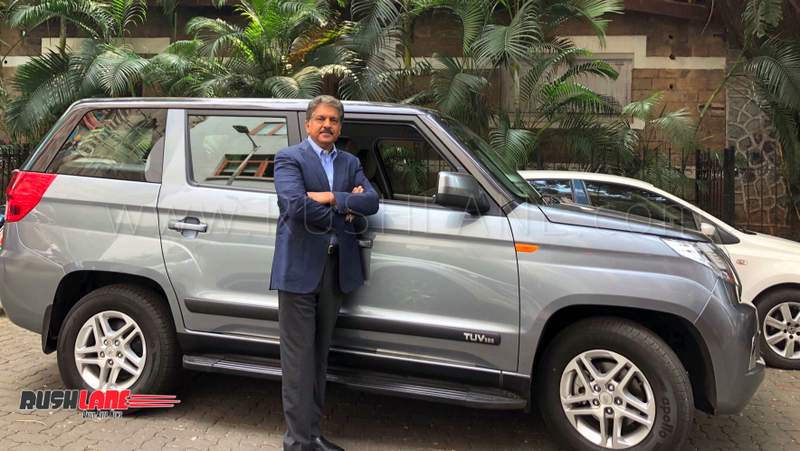 Anand Mahindra said – “She finally arrived..My TUV 300 Plus. My chaps had kept me waiting…But it was worth the wait; they gave me this special steel-grey metallic paint. Yes, I had to give up my TUV 300 Green Monster, but now I have this beauty and I’ve named her the Grey Ghost..”

Mr Mahindra’s new set of wheels gets a dual tone finish with a black roof and is heavily accessorized with Mahindra Armor Kit. The new Mahindra TUV300 Plus takes the place of green finished TUV300 that once occupied space in the Mahindra garage but shares space with the XUV500 which Anand Mahindra continues to own.

Mahindra TUV300 Plus is offered in three variants – P4, P6 and P8. It is visibly larger than the XUV300 sub 4 meter SUV though wheelbase is the same at 2,680mm. Cargo space is also increased while rear seats can be folded down to enhance space even further.

Mahindra TUV300 Plus is powered by a 2.2 liter mHawk diesel engine as compared to the 1.5 liter diesel seen powering the regular TUV300. This engine offers 120 hp power and 280 Nm torque and gets mated to a 5 speed manual transmission. The TUV300 Plus is priced from Rs 9.59-10.98 lakhs.