In an unfortunate incident, well known local businessman and builder Mihir Panchal was burnt to death in his Ford Endeavour SUV. As per local media, the incident took place at about 11 AM.

Locals say 42 year old Mihir was travelling in his Ford Endeavour SUV, when the car caught fire. Mihir noticed that the car’s engine was on fire. He tried to get the car on the side of the road and stopped. 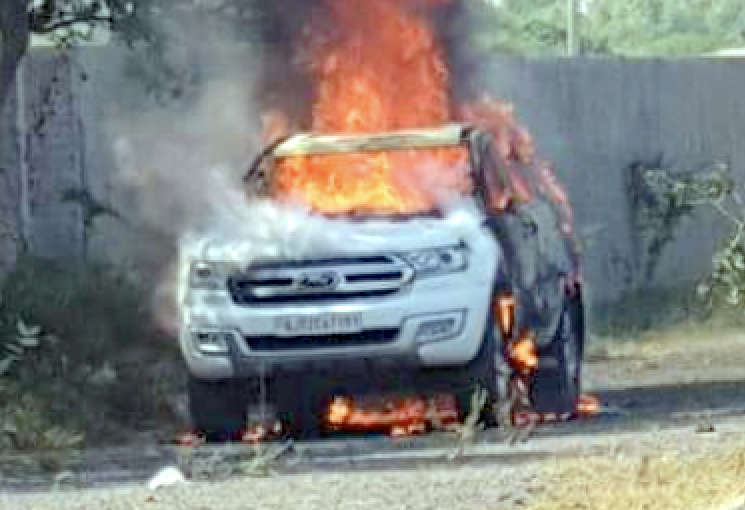 By the time he stopped, there was a blast in the car. The entire front of the car was engulfed in flames in this blast. TV9 Gujarat reports that Mihir was wearing a seat belt when the car halted. And as the car had stopped functioning, the seat belt was jammed. Because of this, Mihir was not able to remove the seat belt and get out of the car.

Locals did alert police, as well as, fire brigade, but by the time they reached, the entire car was engulfed in flames. Soon the flames were put off, but it was too late. Police are investigating the cause of the fire. It is not yet clear as to what could have caused a new car to catch fire. Police has not ruled out homicide.

This is not the first time Ford Endeavour SUV has caught fire in India. In April this year, an Endeavour belonging to Dr. Sharana Reddy had caught fire due to unknown reasons. At that time too, it was the engine of the car which had caught fire first. Luckily, passengers and the driver managed to get out of the car before it was too late. Ford India had not revealed any statement as to why a month old Rs 40 lakh car caught fire.

Even before launch, when the Ford Endeavour was being tested in Australia, there was a similar incident where the SUV had caught fire. At that time Ford had issued a statement saying it was a one-off incident.