The Aprilia SXR 160 Maxi Scooter could be priced from around Rs.1.30 lakhs

The Aprilia SXR 160 maxi scooter has been detailed prior to launch later this month. It will be opened for bookings at the end of this week – on 11th Dec.

Bookings will open online, as well as at their dealer across India. The new scooter has entered production at the company plant in Baramati earlier this month.

Aprilia SXR 160 is designed in Italy specifically for the Indian market. It is a maxi scooter as was seen when on display at the 2020 Auto Expo in February. Launch was initially set for earlier this year but the COVID-19 pandemic caused some delay.

Where design is concerned, the maxi scooter boasts of ample luggage and leg space. The rider gets an upright riding stature for better comfort. It receives a large seat, LED headlamps inspired by the RS660 and an angular front apron. Design elements to the rear include an LED tail lamp with integrated rear blinkers. 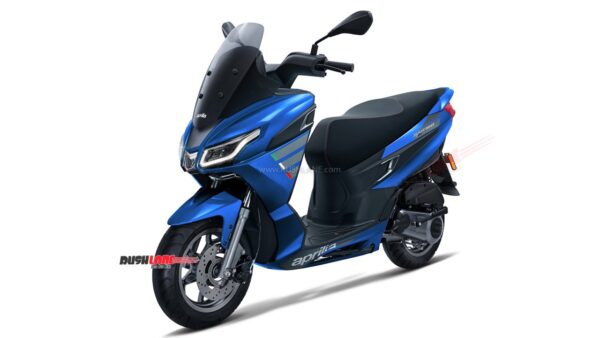 The Aprilia SXR 160 gets a fully digital LCD instrument cluster with feather touch switches, a USB charging port and smartphone connectivity. Styling elements also include raised handlebars, 12 inch alloy wheels and illuminated under-seat storage. It will get ABS among its safety features while Piaggio has announced that the maxi scooter will boast of excellent handling and efficient stability even at higher speed.

Most Powerful Scooter in Segment

Piaggio Aprilia SXR 160 is slated to be the most powerful scooter in its segment. It will get its power via a 160cc, 3 valve, single cylinder, fuel injected engine which also powers the SR160. No power or torque figures have been revealed as on date but are expected to be in the region of 10.7 hp and 11.6 Nm. The engine gets mated to a CVT unit.

Braking and suspension will be via ventilated disc brakes with twin pot calipers and telescopic fork in the front and adjustable shock absorbers at the rear. Once launched, the Aprilia SXR 160 will compete against its very own siblings Aprilia SR 160 and 150 cc Vespa scooters while it will also go up against the Suzuki Burgman Street 125.