It has been almost five years since we saw James Bond sipping through his favourite Vodka Martini, shaken not stirred

While the worldwide pandemic has postponed the next film, which was scheduled to release in April earlier this year, the makers are now gearing up for the release of the twenty-fifth film of the iconic spy franchise. Also, the makers of Her Majesty’s most well-known agent’s car have recently revealed the 007 Special Edition models that are going to feature in the upcoming Bond movie.

British sports car manufacturer, Aston Martin, which has been the favourite car of James Bond since 1960’s, has launched limited 007 Edition variants of the Vantage and DBS Superleggera.

The new Special Edition models are set to feature in the forthcoming Bond movie- No Time To Die. The limited-edition car has been designed and beautifully crafted by the experts at the Q Bespoke division of Aston Martin. Ironically, even in the movies, Bond gets his Aston Martin commissioned from MI6’s equipment department, popularly known as ‘Q branch’. 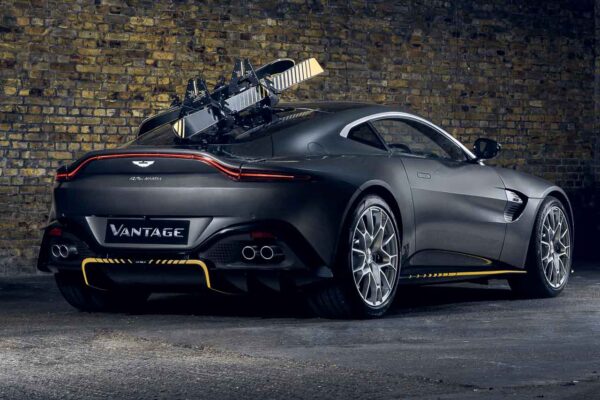 Starting off with the Vantage, the model looks plenty inspired by previous installations of the movie franchise. Vantage made its maiden appearance in the 1987 flick, The Living Daylights. As per sources, the super spy unwraps this car from his personal garage in London, much like he did in Skyfall, only in that case it was another classic model- the DB5.

Design of the Vantage

Based on the regular Vantage V8, the Bond special edition retains its aggressive design language of a muscle car. At the exterior, the standard grille gets replaced by a retro-style mesh complemented by chrome surroundings. Also, the diffuser dashed with yellow colour at the rear points out to references of hazard stripes of the rockets carried by the original car. Additionally, the roof of the new car gets skis and ski-racks suggesting the scenario where it will be put to use in this movie. 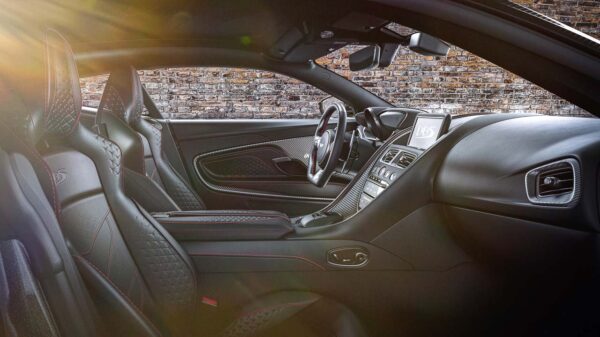 The exterior of the car will be covered in Cumberland Grey colour. Apart from these, it also sports the 007 badging at rear as well as on the seats and the central console inside the cabin. It stands on 21-inchers Y-spoked wheels. Overall, it appears to be a well-rounded package for any Bond fan.

Design of the DBS Superleggera

Coming to the DBS Superleggera (which translated to Superlight), it has its typical intimidating road presence. The car will be offered in a Ceramic Grey paint job with bits and pieces of exterior made from carbon-fibre. It gets similar 21-inch diamond-cut spoked wheels with a subtle difference in design from that of the Vantage. The 007 logos are spread generously all over the body at the exterior as well inside the cockpit. 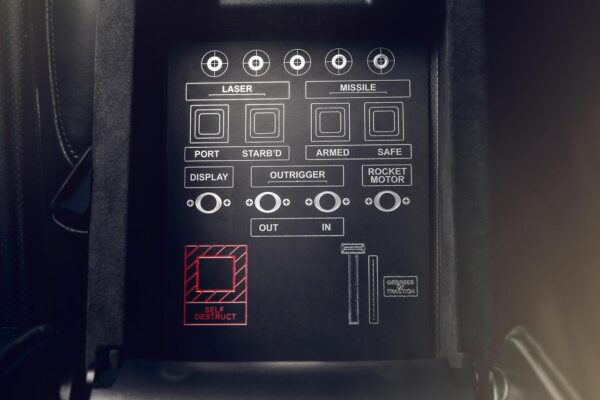 Mechanically, both the special edition models of Vantage and  DBS Superleggera are identical to their stock models. While the DBS is powered by a 5.2-litre twin-turbo V12 engine cranking up 715 bhp and a huge 900 Nm of peak torque, a 503 horsepower producing 4.0-litre twin-turbo V8 unit backs the Vantage. Transmission duties are carried either by an 8-speed automatic or a 7-speed manual.

Both the Aston Martin models- DBS Superleggera and Vantage 007 Editions go on sale at a retail price of £279,025 (Rs 2.8 cr) and £161,000 (Rs 1.61 cr) respectively. Only 100 units of the special edition Vantage will be sold whereas the DBS Superleggera will be a much more exclusive affair with only 25 units to be sold globally.