Last month, Ather Energy announced the launch of their 450X Series 1 electric scooter. This is a Limited edition of the 450X; and is being offered to those customers who pre-ordered the 450X prior to its reveal on 28th January 2020. If you ordered after 28th Jan, you are not eligible.

Ather says that the Series 1 is their way of thanking their customers who showed trust in them by booking their 450X scooter even before it was revealed. Deliveries of the Ather 450X are set to start in the coming days. Ahead of that, it has now arrived in the showroom. Below is a first look video, shared by James JDC.

This special edition is based on the flagship 450X and will be the first electric scooter to receive translucent body panels that reveal its cast aluminum chassis and trellis framework. This feature will be the main highlight of the special edition Series 1. Ather Energy has also confirmed that customers would receive the Collector’s Edition Series 1 from later this month.

Buyers will initially receive the Ather 450X Series 1 with black panels which would be replaced with translucent panels starting from March 2021. Deliveries will be start in 11 cities of Bangalore, Chennai, Hyderabad, Kochi, Coimbatore, Kozhikode, Mumbai, Delhi-NCR, Pune, Ahmedabad and Kolkata.

The Ather 450X Series 1 is built on a light weight hybrid aluminum frame chassis and kerb weight will stand at 108 kgs. It will be seen in sporty colour options of red and black called ‘DayGlo Red’ and will receive distinctive ‘Series 1’ ‘450X’ stickers across it body.

Noticed on the model showcased in the video is a 7 inch touchscreen display. This display shows off an intro screen with the display offering information of over-the-air updates, on board navigation, auto indicator off, guide me home lamps and connected mobile App. 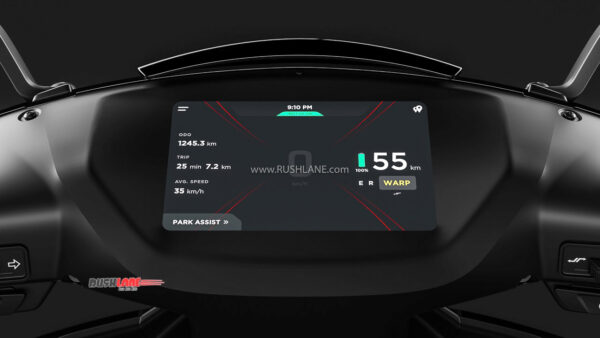 This makes the Ather 450X faster not only as compared to any other electric scooter but also when compared to a 125 cc petrol powered scooter currently on sale in the country. The scooter offers 4 riding modes of – Eco, Ride, Sport and Wrap. The battery can be charged via a home charger from 0-80 percent in 3 hours 35 minutes and from 0 to 100 percent in 5 hours 45 minutes.

Ather 450X is priced at Rs.1.59 lakhs which is inclusive of GST and FAMI II incentives. This price is inclusive of battery ownership but registration and insurance will be extra. Price of the Series 1 is same as that of the 450X.