With electric mobility solutions slowly gaining feet in the country, electric scooters have benefitted the most. With better affordability and performance with innovation of new technologies, it seems e-scooters will lay the stepping stone for electric vehicles in India.

However, one aspect which still makes consumers think about an e-scooter, as with all EVs, is its single-charge range. Buyers are still wary as to how many kilometers can an e-scooter travel before its battery dies out. The range claimed by various brands until now has been very inconsistent and far from their claimed figures. However, the same may not be true for Ather 450.

Ather Energy claims the single-charge range of 450 e-scooter to be around 107 km (ARAI rated). Multiple owners have claimed that they have managed to achieve range higher than 107 kms. One owner has even claimed that he achieved a range of over 139 kms on a single charge.

The owner, HarshaVardhan has posted his experience on the official Ather Energy website along with details. He had no plans on achieving this record drive range, but his only aim was to reach his destination. In his own words, he says, “No intention to make or break records and this was achieved purely out of necessity.”

What Speed to Maintain To Achieve Max Range

In his post, he states that he started at 8 AM from his hometown Chittoor to Chennai for periodic maintenance of his 450. His Ather 450 electric scooter had been kept on charge overnight, and was showing full 100% battery at the time he left.

For most of the journey, he maintained avg speed of 20-25 kms in ECO mode. His top speed during the entire journey was 35 kmph. The only weight he was carrying was Ather DOT charger in boot and a bag weighing about 2 kgs. His body weight is about 55 kgs. He says that if you travel at a faster rate, you will not manage to achieve such range. For example, another owner mentioning that he managed to get 84 kms range while cruising at 60 kmph on his Ather electric scooter. 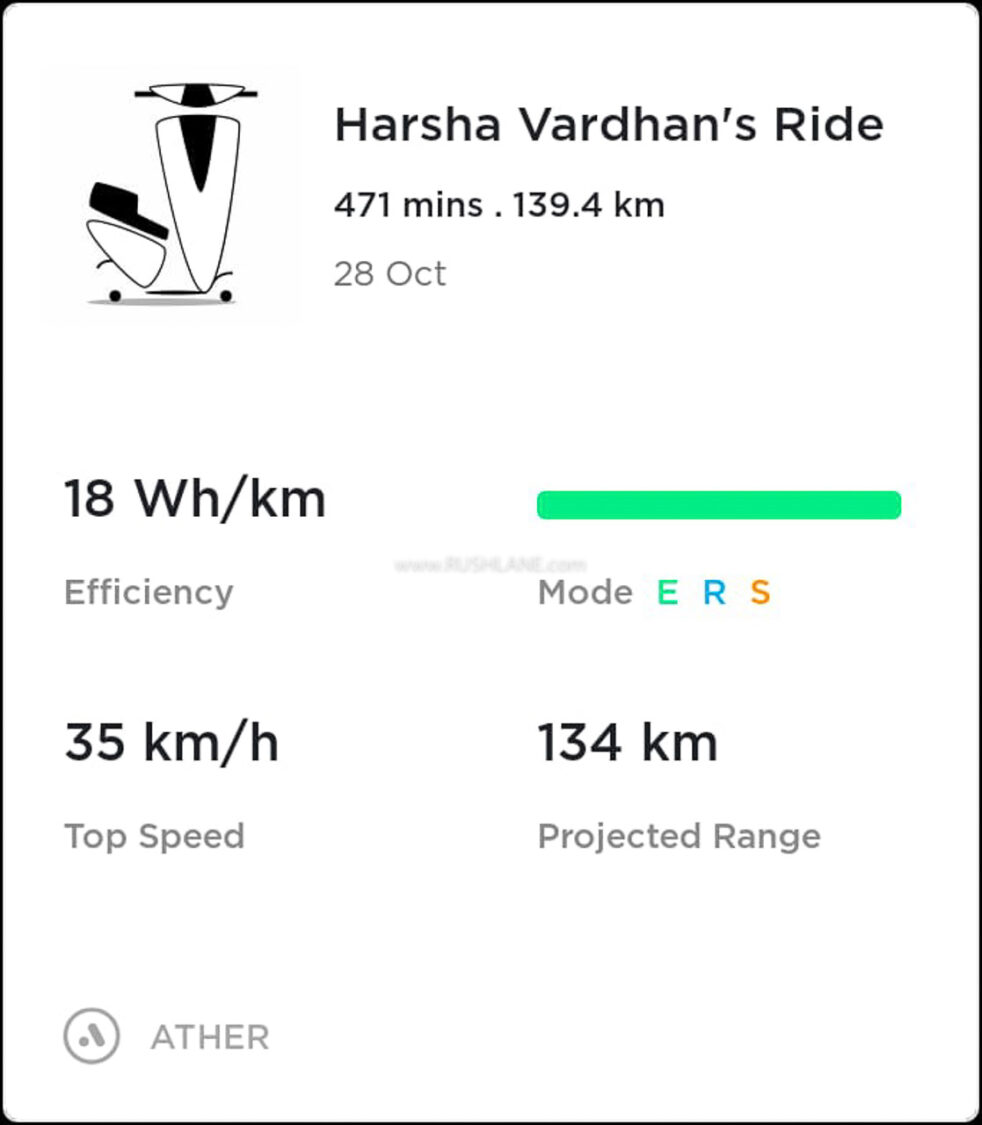 He hypermiled and rode as efficiently as one could for almost four hours at an average speed of around 20-30 kmph. It was tough for him to carry out this journey at such low speeds for such a long period of time but he instead channeled his focus on the reaction of the people around him who were amazed by the looks of this new e-scooter. The green registration plate was another point of attention as there are no electric vehicles around that region.

HarshaVardhan is not the only owner who has managed to achieve such high range. Another owner, hamsapriya1212 has posted in the group that he managed to achieve a range of over 110 kms on single charge. He was intrigued to find out that many people had achieved a range of almost 135 km far above the claimed range of 107 km. Therefore, he wished to overhaul this record for some time now. He got his consumption down to 18 Wh/km during his daily commutes which theoretically adds up to 133 km on full charge subjected to if it can be constantly maintained.

He started at 5 AM with the aim of achieving max range from his fully charged Ather electric scooter. He managed to achieve this range by not riding over 35 kmph, accelerating gradually and maintaining same speed, avoid heating up of the battery and taking breaks. This allowed him to exhaust the battery at 110.3 kms.

Another owner, Raghupathy has also shared his story of getting higher range. Raghupathy got his Ather 450 e-scooter delivered in July although he was supposed to receive it by March. However, thanks to the Covid-19 pandemic and subsequent nationwide lockdown, the delivery got deferred. An Ather community member helped him take delivery of his brand new electric scooter and ship it to Tirupur near Coimbatore.

Raghupathy set out for the highway starting from his residence in his village near Tirupur. He chose a day sensing the perfect weather conditions when it was neither windy nor rainy and began his ride on a 100 percent charge level. He made sure he wasn’t carrying any extra weight so that the scooter can perform most efficiently.

He crossed 50 km after consuming 45 percent of his battery’s life. Unsure how much longer could the battery actually last, Raghupathy decided to turn around toward his home after driving straight for two hours and two minutes. While returning home, he could sense the difference as the elevation was dropping and that helped bring down the Wh consumption by 2 points.

On reaching home he was surprised to find out 10 percent of his battery life still left. He further took a round of 3 km around his house when he finally came to a halt after an acute back pain due to riding for almost four hours. At the end of his test, he travelled 103 km with 2 percent of charge still left.