It’s challenging times for the auto sector, as sales have tumbled for third consecutive quarter in April-June 2019. The slump was initially limited to passenger vehicles (PV) last year, but now it has spread to the entire auto industry. The auto sector was expecting that consumer sentiments would improve after a stable government is formed at the centre, but those hopes have been dashed.

Budget too failed to provide any major incentives for the auto sector with the exception of electric vehicle (EV) segment that is expected to benefit from lower GST and subsidies. The downtrend in auto has affected the entire industry ecosystem wherein dealers are finding it tough to stay afloat. Many dealerships have already shut shop in the last few months.

April-June 2019 sales – Numbers for April-June 2019 are quite similar to that of June 2019. Total vehicle sales for this period stood at 6,085,406 units, which translates into negative growth of -12.35%. During the same period last year, total sales were 6,942,742 units. At -18.42% de-growth, passenger vehicles segment registered the maximum loss in sales. This is followed by M&HCVs -16-60%, two-wheelers -11.68%, three-wheelers -7.35% and LCVs -5.06%. According to SIAM, factors like reduced demand in rural areas, rising insurance cost, lack of finance options and poor consumer sentiment have been affecting auto sales in the last three quarters.

Budget 2019 dashes hopes – The auto industry was expecting the government to announce some invectives in budget 2019 to boost the auto sector, but it has turned out to be a missed opportunity. The only exception is the electric vehicle (EV) segment, which stands to gain from 7% reduction in GST (12% to 5%), scrapping of custom duty on EV parts, and income tax deduction for consumers on loans taken for the purchase of EVs. 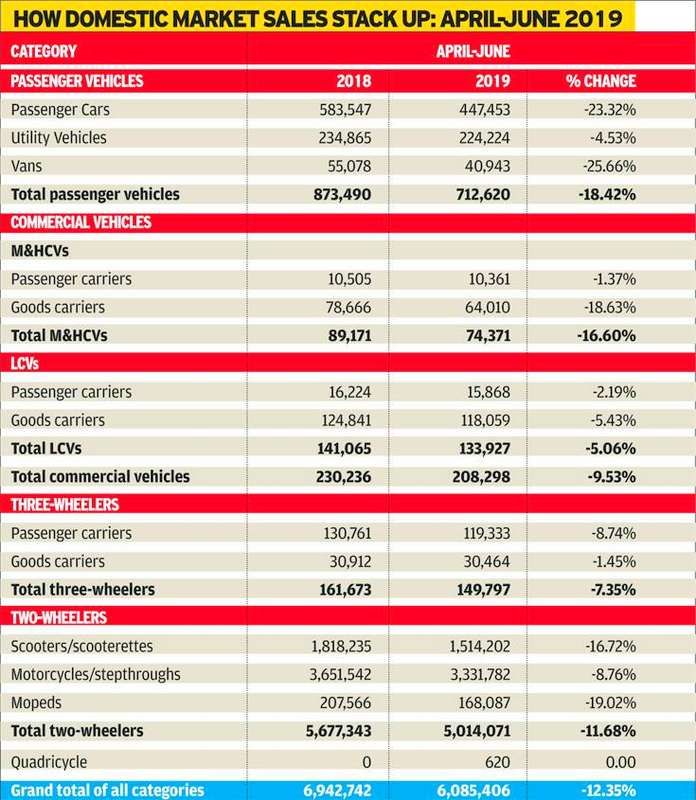 Auto industry was expecting reduction in GST across all segments, but the government seems to be focusing solely on EV segment. Earlier, in 2009 and 2011, the government had introduced tax cuts to help revive the auto sector. However, there was no stimulus package announced in this year’s budget. A proper roadmap for vehicle scrappage is also missing in budget 2019, which is another disappointment for auto sector.

Rather than announcing a stimulus package, government has added Rs 2 additional cess on petrol and diesel. This move is to encourage the shift to electric vehicles, but it will further bleed vehicles that use conventional internal combustion engines. While SIAM supports government’s plan for a greener future, it cannot be achieved by killing the present. SIAM feels that shift to electric should be done gradually so that the transition can be achieved in a seamless manner. As of now, dealerships have started shutting down and jobs are being lost, which is an unfortunate development.

The needs of auto sector cannot be ignored, as it is a major contributor to GST and one of the largest employment generators. In FY2019, auto sector contributed Rs 120,000 crore GST, which is more than 10% of the overall GST collections done by the government. Even as auto sector is losing sales, it has several other challenges such as upgrading their portfolio to meet BS-VI emission norms and updated security requirements. The proposed shift to electric by 2025 is another major worry for the auto sector.

Future outlook – Despite growing challenges, auto sector is hopeful that things will turn positive eventually. Certain announcements made in budget 2019 such as road upgradation project in rural areas, capital infusion in banks, improved regulations for NBFCs, and tax reduction for companies with up to Rs 400 crore turnover will indirectly aid the auto sector. If $5 trillion economy goal is to be achieved, government will have to look into the interests of auto sector.