The upcoming Bajaj electric scooter is an open secret, especially after multiple spotting of camouflaged test mules in public. The brand name Urbanite has also been officially confirmed. Under this new brand name Urbanite, Bajaj will launch a range of new scooters.

We have received first official communication from Bajaj regarding the upcoming product in the form of a save-the-date mailer. The invite contains several hints towards the zero emission powertrain of the product. Bajaj stopped short of confirming that the ‘special launch event’ is all about an electric scooter but the ‘Hamara Kal’ branding (translates to ‘Our Tomorrow’) is a give away.

The event which is set to take place on October 16 has Nitin Gadkari, minster of road transport and highways, as chief guest and Amitabh Kant, CEO, NITI Aayog, as guest of honor. Both the guests are strong advocates of electrification of transportation in India to drive down pollution and to reduce nation’s dependency of crude oil imports. 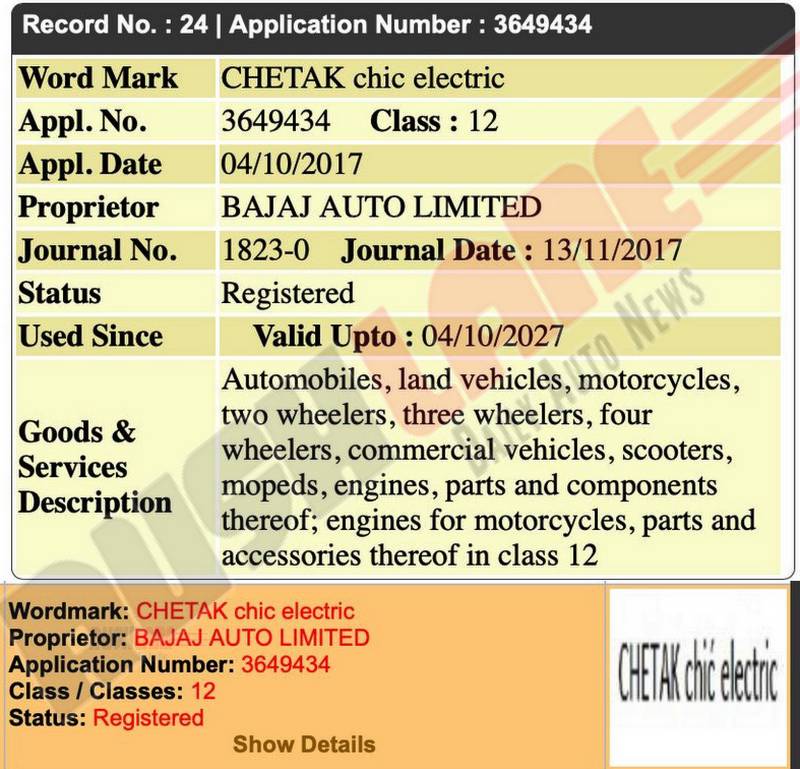 The tagline in the invite reads “We wrote history. Now we write the future”. The history appears to be pointing towards Bajaj’s heyday as a scooter manufacturer and the future could be point towards a spiritual successor.

Bajaj has not revealed name of this new electric scooter which will rival the likes of Ather 450. But a leaked document confirms that Bajaj has registered the name Chetak Chic Electric for their upcoming scooter. Considering Chetak was the most successful Bajaj scooter of the yesteryears, it is very much possible Bajaj uses the same name for their future ready electric scooter. Bajaj Chetak Chic Electric could be the name of new Bajaj e-scooter.

To recap, Bajaj Auto is keen on being one of the first mass market OEMs to enter electric two wheeler space which is currently represented by well-funded startups like Ather Energy and Revolt Intellicorp. Bajaj earlier announced that the first electric two wheeler from the company could be ready as early as end-2019 and it looks like things are on track.

Some of the Bajaj scooter prototypes were equipped with silencers, indicating that IC-engined version could also be in the offing but we will know for sure on the launch day. Technical specifications are under wraps as of now but it is reasonable to assume that electric powertrain would involve a BLDC, lithium-ion battery pack and sophisticated power electronics and connectivity suite. The product is expected to be positioned in the premium segment.

Bajaj’s primary advantage would be its established manufacturing infrastructure, a wide vendor base and good level of scale. All these factors would help the company price its electric vehicle at an attractive price point.