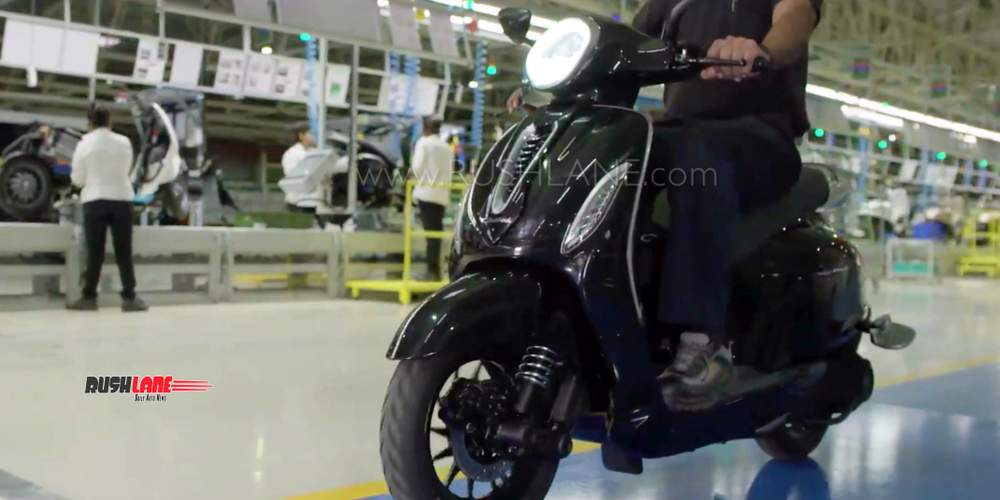 Bajaj Auto Limited has announced its comeback in the scooter segment with the new Chetak electric. To be launched in Jan 2020, as the company’s first electric offering, production of this new e-scooter has already started at company plant in Pune.

Bajaj Chetak electric will initially be launched in Pune and Bengaluru. It will be sold via Pro Biking dealerships of the company from where it also sells the KTM motorcycles. Bajaj Chetak electric is positioned as a premium product, and will be more expensive than conventional petrol scooters.

The new Chetak electric comprises of an all metal body. It features a Vespa like retro styling with curved side panels, a wide front apron and 12” multi spoke alloy wheels fitted with MRF Zapper-K tyres. It gets LED lighting all around with LED DRLs, keyless start function and a single unit seat.

On-board equipment will includes a fully digital instrument cluster offering vital information and a host of connected features offering vehicle monitoring for security purposes. Bajaj Auto will be presenting the Chetak electric scooter in a choice of 6 color options. It was also noted that there was no Bajaj logo on the scooter, as the company stated it is part of a new brand called Urbanite, that has been created for Bajaj electric vehicles

The new Bajaj electric scooter gets an IP67 rated Li-Ion battery offering two driving models of Economy and Sport and delivering 95 km and 85 km respectively. Though no other details have been revealed, it is known that the battery is not swappable. Braking duties are carried out via disc brake at the front and drum brake at the rear with regenerative braking.

No pricing details were also revealed but Rajiv Bajaj, Managing Director, Bajaj Auto Limited has confirmed that pricing of the Bajaj Chetak electric scooter would not be more than Rs.1.5 lakhs. Bajaj Chetak bookings will open soon online, at the company site www.chetak.com