K-Speed shares that the Diablo Cyclops is on display on Bajaj Auto’s pavilion at 2020 Bangkok International Motor Show that started this week. This is also a sign that the Thai government is substantially easing down its lockdown protocols. However, all the basic safety guidelines would be followed at the event.

It is good to see that global automotive shows are finally happening after such a delay. India’s very own Auto Expo 2020 was held in early February; about a month and a half before the nation went into strict lockdown. On the other hand, prestigious events such as Geneva International Motor Show and EICMA were cancelled for this year.

How The Diablo Cyclops Looks 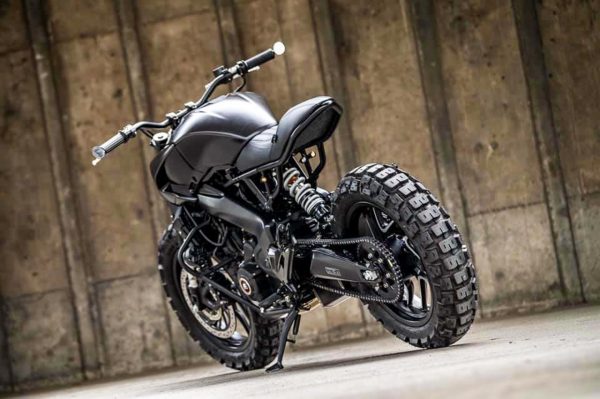 Despite carrying a long list of upgrades, the K-Speed Diablo Cyclops is essentially an example of form over function. It may not have the typical go-anywhere capability of a scrambler but does not fail to grab attention. The overall aesthetics may not impress everyone, especially hardcore motorcycle enthusiasts who cannot compromise on a product’s initial focus — in this case, long-distance cruising with appreciable performance and comfort (for a single-cylinder).

At the heart rests the familiar 373.3cc liquid-cooled DOHC single-cylinder engine. In Indian-spec BS6 format, it churns out 39.4bhp @ 8,650rpm and 35Nm @ 7,000rpm while mated to a 6-speed transmission (with slipper clutch). Compared to a stock 2020MY Bajaj Dominar, K-Speed’s Diablo Cyclops would offer a significantly different riding experience thanks to all the upgrades.