The Hayabusa was first introduced back in 1999. But, it was the movie Dhoom back in 2004 which marketed the Hayabusa in India like wildfire. John Abraham racing away from cops at insane speeds probably did the trick. Even after about 20 years, the Hayabusa is among the best selling superbikes in India.

But, owning one is quite expensive. In spite of Suzuki making the motorcycle in India (via CKD route), price is still quite high in the region of Rs 14 lakhs ex-showroom. On-road this could easily go up to Rs 17 lakhs, depending on the city you are purchasing it from. 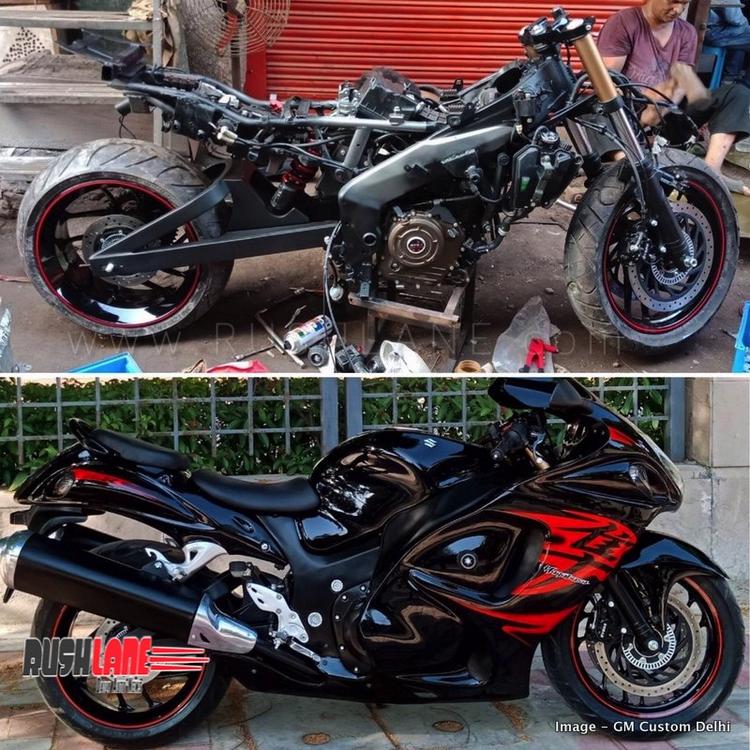 This makes it out of reach of most of us. But, there is a solution. If you don’t mind the performance, and are looking to have a motorcycle which looks exactly like the Hayabusa, there is hope. Located at SP Mukherjee Market in Delhi, GM Custom house specializes in modifying motorcycles to look like Suzuki Hayabusa. Run by Mr Firoz, GM Custom can modify any motorcycle in the 150-400 cc segment to look like a Hayabusa. They have already converted a Hero Xtreme, Hero Karizma, and now they have done the same with a Bajaj Dominar.

Parts added to make your Bajaj Dominar look like a Hayabusa are new tyres, new swing-arm, front and rear suspension, completely removing all panels and replacing them with a dye cast of Hayabusa. There is no change made to the engine. The motorcycle is still powered by the same single cylinder 373 cc engine which delivers 35 PS and 35 Nm.

How does it affect performance? Firoz tells Rushlane that there is not much difference. In terms of mileage, owners will get about 4-5 kmpl less than what they were originally getting. Speaking about costs, Firoz tells us that it can depend from bike to bike.

For example, converting a Bajaj Dominar to Hayabusa could cost the owner in the region of Rs 1.6 lakhs to Rs 2 lakhs. Below is the image gallery which shows the transformation of Bajaj Dominar into Suzuki Hayabusa.