Bajaj electric rickshaw has been spied on test in Pune as well as in Bangalore. Just like Chetak electric scooter, launch of this e-rick is also expected to take place in these two cities at first.

Alongwith ensuring BSVI readiness and adaption, manufacturers now face the tough ask of leaping into EV tech. A premise that’s not only a future expectation but is being perceived as a future norm. Bajaj Auto has for long been testing its electric rickshaw. Last week the company has gotten its Type Approval Certificate issued by ARAI for its compliancy as per Central Motor Vehicles Rules.

The L5M 3-wheeler passenger vehicle, a fully electric vehicle continues with the tried and tested 4 seater design. The front seat reserved for the driver, and the 3 seats behind for passengers. Bajaj RE EV measures in at a length of 1,714 mm, width of 1,350 mm, and length of 1,772. Wheelbase is pegged at 2,010 mm, and gross weight of vehicle at 732 kgs. Bajaj RE EV gets power from a 4.3 kW electric motor. Top speed of 42 km/h can be maintained for a period of 30 minutes. Battery specs have not been reported in the document. 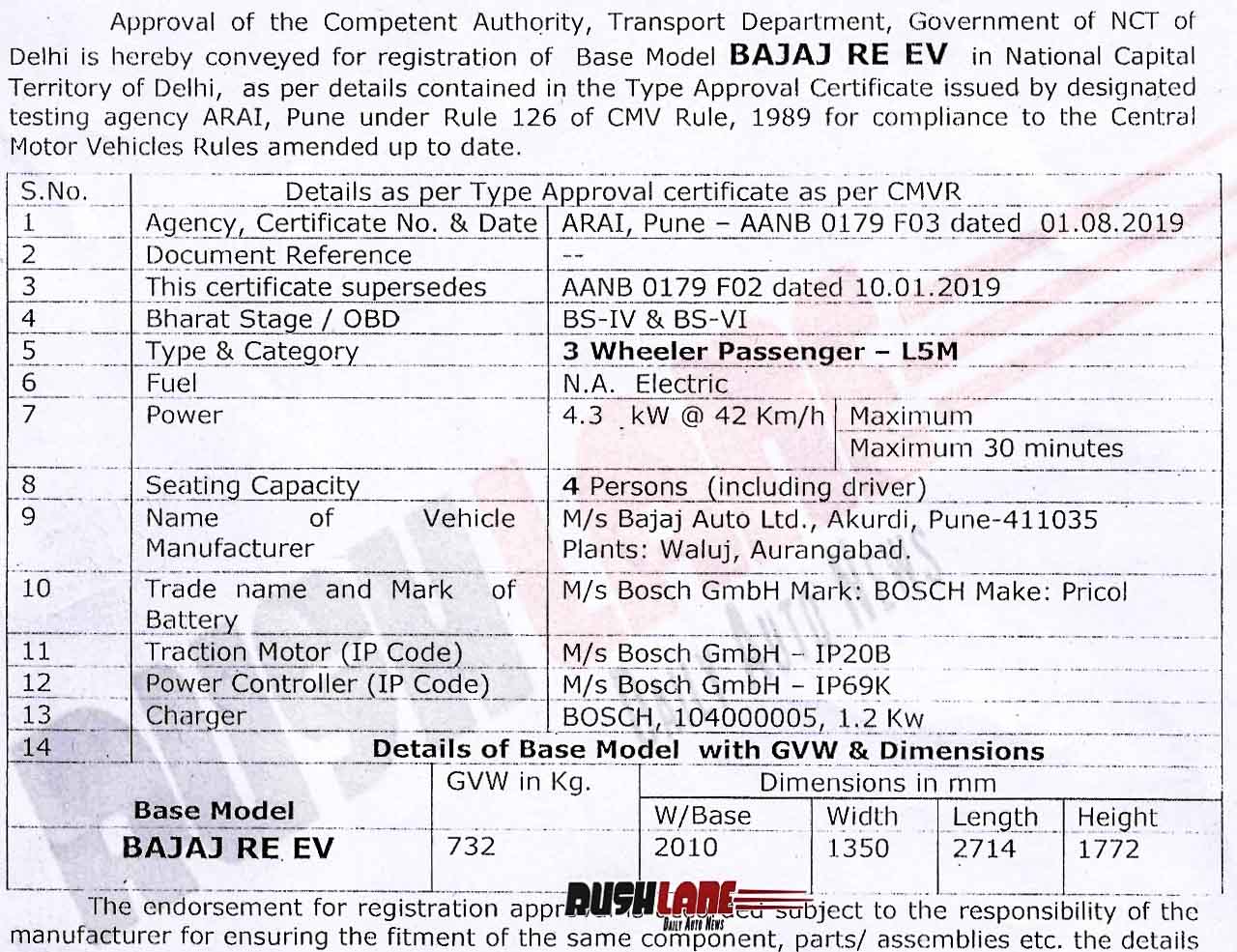 Over time, the vehicles have often been spied testing in Bangalore. The foremost reason for this is Bosch. Bajaj RE EV features a Bosch Pricol battery, an IP20B traction motor, and a IP69K power controller, as well as a 1.2 Kw charger.

The vehicle was showcased at 2018 MOVE Summit in September 2018. at the time, the Bajaj RE electric rickshaw was reported to be available with a charging range of 120 kms. The 48 volt lithium batteries in use are swappable and can be charged via an on board charger in 6 hours.

Keeping in mind safety norms, or the lack of it, safety requirements for vehicles were revised in 2019. As such, the quintessential auto rickshaw though viewed in the lowest rungs of the safety chain is actually safer than what a rickshaw offered a few years earlier.

The auto rickshaw space finds large-scale takers of CNG. And EV adaption though rampant has been slow in the organised market. While entire regions rely on electric rickshaws/totos, they are mostly Chinese flatpack versions that can easily be serviced by local mechanics. Following, Auto Expo 2018, Mahindra entered the space with its Treo electric rickshaw.