It’s not a surprise that Bajaj Auto, country’s leading three-wheeler maker, is working on an electric version of its popular RE auto rickshaw. The government is pushing towards large scale electrification of automobiles and given the sheer number of the passenger three wheelers plying India’s big cities, this segment cannot be ignored.

A camouflaged test mule of Bajaj RE electric auto rickshaw has been spotted testing recently, signalling that the product is the advanced stages of development. It looks like Bajaj is currently gathering the much needed real-life usage data which would be crucial in deciding on the final battery and motor sizes. 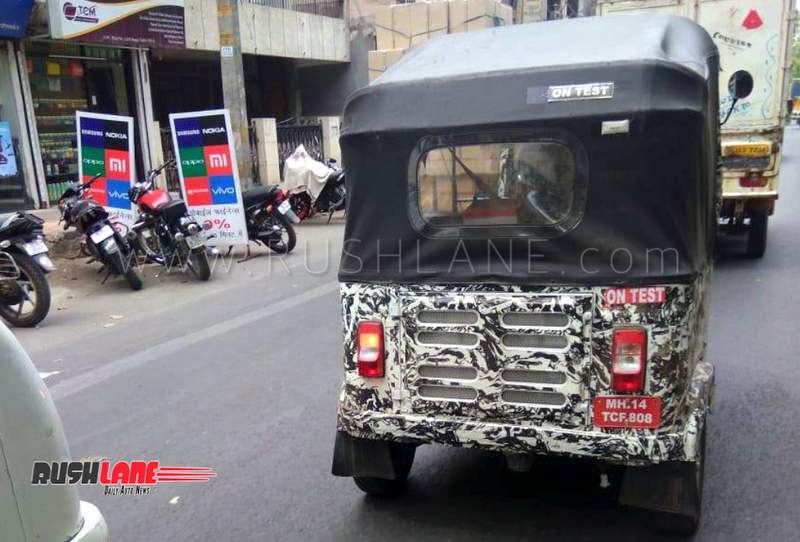 Except for the lack of exhaust pipe and the famous ‘tuk-tuk’ noise, the prototype looks pretty much like the existing RE which is available with petrol, diesel, LPG and CNG powertrain configurations. Technical details about the new eco auto rickshaw are scarce as of now but we expect the electric motor to be mounted above the rear axle (same location as the IC engine in the conventional version).

Given the compactness of a motor, we think that there would be enough room in the motor compartment to mount the battery and power electronics but Bajaj’s engineers could also make use of the space underneath the driver seat for this purpose.

We think Bajaj has what it takes to ensure that the electric auto rickshaw will offer a better total operating economy than its IC-engined counterparts but the real challenge would be to make the overall ownership experience practical enough to convince large scale adoption. This would mean an attractive exchange scheme, assistance from government in the form subsidies and charging infrastructure exclusive for three-wheelers.

The Bajaj RE electric auto rickshaw is expected to be launched in 2020. We expect the company to kick-start an extensive nation-wide beta-testing program before the full-fledged launch to gather customer feedback. As far as passengers are concerned, a quiet auto rickshaw is always welcome.