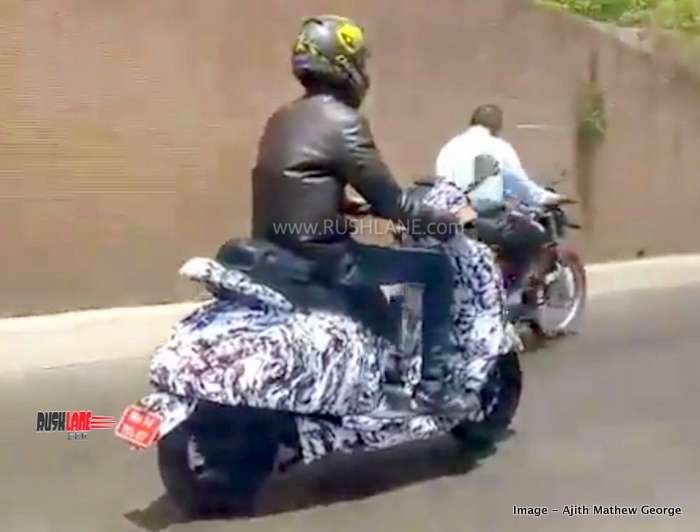 After staying away from the scooter segment, Bajaj Auto is reportedly getting ready to enter the lucrative / high volume segment of scooters with their new brand called Urbanite. The same was confirmed by Bajaj at a press conference earlier this year.

Earlier today, a test mule of scooter was posted, which is believed to be the new Bajaj scooter. It featured exhaust system, that was visible in the spy photo. This most likely implies that it is powered by a petrol engine, and is not electric.

Though Bajaj has not confirmed, reports suggest that the new electric scooter from Bajaj will feature Tesla like features. It could feature eSIM embedded internet tech, which will allow users to keep a check on various details about their scooter via their smartphone app. They will be able to monitor how the scooter is being ridden, how much battery is remaining, how much time for full charge, location of scooter, etc.

Powering the Bajaj electric scooter will be an electric motor which could deliver driving range of about 80 kms. It could also feature drive modes, to deliver power depending on the need. Once launched, it will compete with the likes of Ather 340, 450, which are on sale for approx Rs 1.1 lakh to Rs 1.25 lakh.

Bajaj Auto Limited, will be venturing into the scooter segment after saying on record that they have no intention of launching scooters, as they are a motorcycle makers, and would not want to deviate from their focus of becoming a global motorcycle brand.

Bajaj Auto is also working on an all electric version of their three wheeled rickshaw, as well as the new Qute quadricycle. All these are expected to be launched under the new Urbanite brand. Bajaj Urbanite Unit, dedicated exclusively to creating electric vehicles, is headed by Mr. Sumeet Narang. He will be assisted by Mr. Amit Nandi, head of Probiking Business Unit for the financial year 2019.

Earlier today, it was reported Indian govt is planning to ban all petrol (under 150 cc) powered two wheelers by 1st April 2025. Only electric two wheelers will be on sale post that date. Others have already started working on electric tech.

Hero Motocorp has already entered into this arena with Ather Energy at an investment of Rs 205 crores. Tork Motors recently hired ex Yamaha India VP Sales and Marketing. TVS Motors is also working on an electric scooter while Emflux Motors has showcased a Made in India electric sports bike. Mahindra already has an electric division and so does Honda.