Scrambler styled motorcycle demand is on the rise (even Royal Enfield is going to launch one soon). But, in order to get one, you will need to spend a huge amount. So a lot of bike owners who are fond of the Scrambler style, and might not have the budget to buy new expensive Scrambler, have gotten their existing rides modified.

After modification, not all examples appeal to the eye, or even look like a Scrambler. But there are some modifications which are worth noticing. One such example is the Bajaj Pulsar 180 here, which gets wholly transformed into a Ducati Scrambler lookalike. 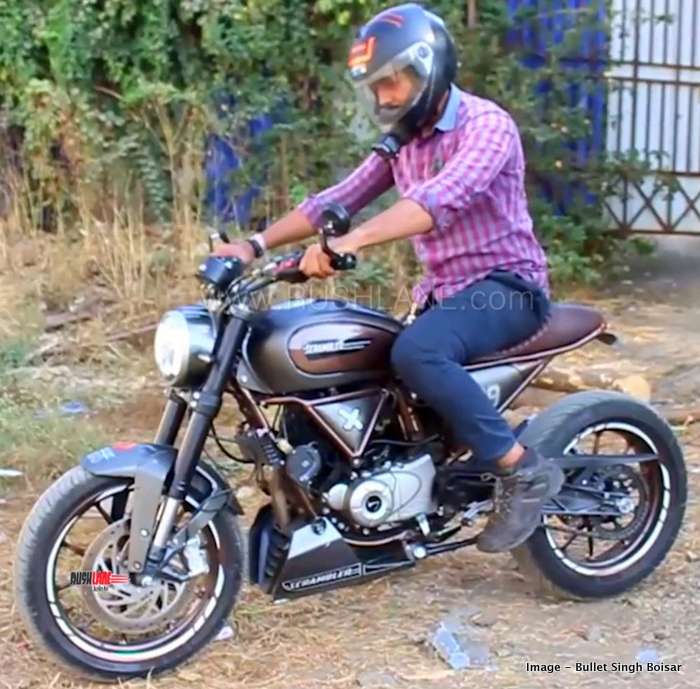 This is the first generation Pulsar that has been given a makeover. It gets its rear sub frame removed and replaced with a shorter tailed section. The stock headlamp also gets replaced with more efficient LED projector lamps now consisting of two projectors which are vertically stacked while the headlamp gets LED DRLs.

Other modifications include new upside down forks, also seen on the KTM 390 Duke while handlebars also see some change in design to more Scrambler centric one which has mirrors installed on bar ends. The accompanying video shows off exactly how this Bajaj Pulsar 180 takes on the Scrambler stance. Watch the detailed video by Bullet Singh Boisar below.

Borrowing a host of features from KTM 390 Duke, the Bajaj Pulsar 180 takes on a Scrambler stance with a new single pod instrument cluster, a rear monoshock and exhaust muffler while belly pan gets larger offering an overall muscular look to the bike. Scrambler styled modifications to the rear includes LED tail lamps which have been integrated into the frame while disc brakes are seen on both front and rear wheels.

The fuel tank is borrowed from Hero Splendor. Though modifications only include visual changes, changes have been made to the engine as well. The stock engine from the Bajaj Pulsar 180 now receives oil cooling system from the Pulsar 220, generating added power on board this modified Scrambler. The entire makeover costs Rs.92,000.