Bike modifications are the order of the day. More and more bikes are being modified into new and more expensive offerings. The most recent such modification was seen when a Bajaj Dominar 400 was converted into a Suzuki Hayabusa.

We have here a video of a Bajaj Pulsar 220 which has been transformed to look like a KTM 390 Duke. These modifications were done by Doctor Customs. It took a period of 6 months to complete the modifications and cost Rs 60,000-75,000 for the entire makeover. 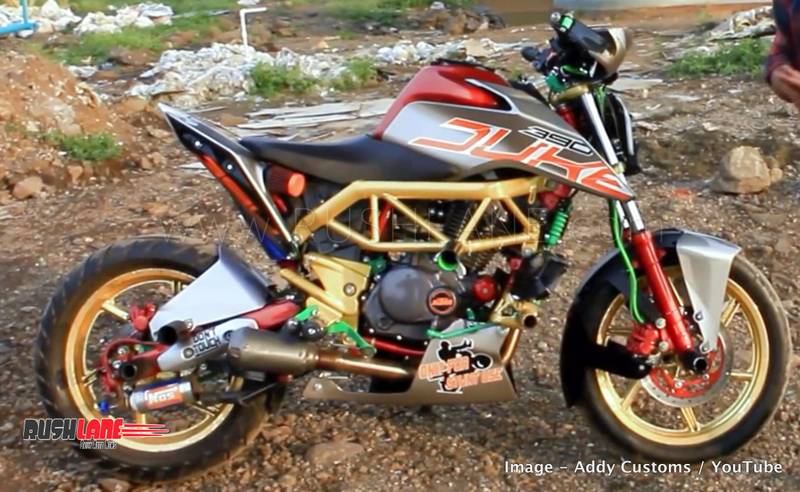 It may be seen from the accompanying video that the Pulsar 220 borrows extensively from the KTM 390 Duke. These include the headlamp design, fuel tank, raised handlebars and front fender while the rear section also apes the KTM 390 Duke.

The handle bars, alloy wheels and trellis framework are finished in a gold paint scheme while an orange color is seen on telescopic forks. The single seater modified Pulsar 220 sports after market twin beam LED lights while a speedometer is positioned on the right side of the engine. Frame sliders are bolted to the trellis frame while the bike receives full exhaust system and free flow air filters. Watch the full video by owner below.

Distinctive KTM 390 branding is noted on the tail and tank sections while the customized Bajaj Pulsar 220 gets a custom swingarm and NOS cylinder positioned on its right side.

Apart from these cosmetic changes, the Bajaj Pulsar 220 turned into a KTM 390 Duke continues to be powered by the engine seen on the original Pulsar 220. This is a 220cc, single cylinder, 4 stroke, 2 valve, oil cooled engine offering 21 bhp power at 8,500 rpm and 19.12 Nm torque at 7,000 rpm mated to a 5 speed manual transmission. The 390 Duke on the other hand is powered by a more efficient 373.2cc engine offering 43 bhp power and 37 Nm torque mated to a 6 speed transmission.