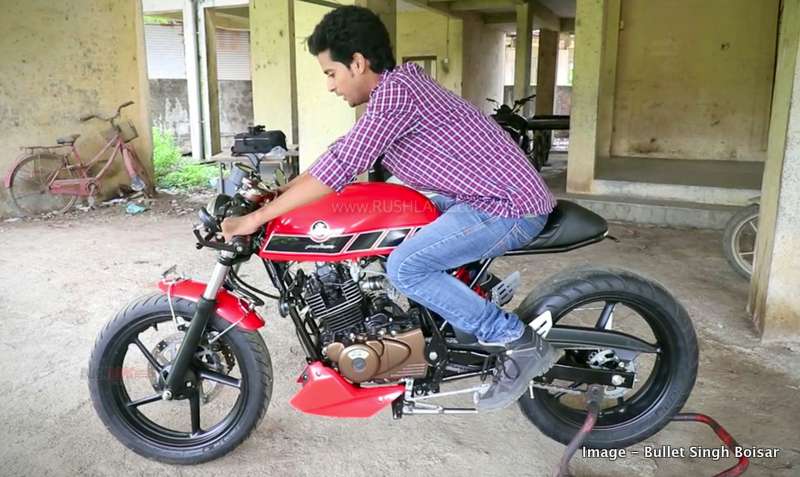 Royal Enfield motorcycles are usually the preferred choice for customization projects that seek to achieve the cafe racer look. However, expert bike modifiers are always willing to test their creativity and experiment with something entirely new.

One such example is this latest customization project that has successfully managed to achieve the cafe racer look on Bajaj’s bestselling bike Pulsar 180. The customization has been done by Mumbai-based ‘Rocky Customs’ and a badge with the same name can be seen on the fuel tank.

One of the interesting aspects of this customization project is that parts from various motorcycles have been used. Probably sourced from a used parts supplier, this strategy might have helped reduce overall cost of the modification project. Watch the detailed video about the modification by Youtube channel Bullet Singh Boisar below.

Normally, motorcycle customizations rely heavily on custom designed or aftermarket components, which increase the cost of customization. Aftermarket and custom made components have been used in this project also, but the reliance is more on using parts from other motorcycles.

Some examples of components sourced from other bikes include the headlight that is taken from Yamaha RX100, suspension from Yamaha FZ, front indicators from KTM Duke, fuel tank from Hero Honda CBZ and bend pipe from old Pulsar 150. Aftermarket items include the clip-on-handlebars, adjustable levers, moxi air filter and a new exhaust that delivers a throatier note.

The motorcycle has undergone various customizations such as the extended fuel tank that comes with sporty graphics. The headlight sourced from Yamaha RX100 has been refitted with LED lights for improved functionality. The chassis also gets an extra frame at the centre, which helps achieve the naked look similar to KTM.

Stock seat has been replaced with a custom made single seat that comes with classic quilted pattern. Wheels and tyres have also been updated to suit the bike’s cafe racer styling. Chrome finish has been added to components such as bend pipe and engine head, which improve the bike’s visual appeal.

Engine is the same as earlier, a 178.60 cc, air-cooled, DTS-i, BS-IV compliant unit that generates 17 hp of max power and 14.22 Nm of max torque. Modified Pulsar 180 has an aggressive riding stance with its low handlebars and rear-set foot pegs. According to the bike modifier, the cost of such projects is in the range of Rs 50-55k.