The Bajaj Pulsar NS200 enjoys a sizable fan following in export markets, especially in Turkey and Southeast Asian nations. In The Philippines, the naked motorcycle is marketed under Kawasaki brand and is called as the Rouser NS200. We have come across a tastefully modified Rouser NS200 from the country.

The modified motorcycle adopts a hard-core scrambler style and as evident from the pictures, the Bajaj Pulsar NS200 embraces the transformation effortlessly. While the end product looks completely different from the stock motorcycle, changes are actually not that extensive.

The modified Bajaj Pulsar NS200 ditches its trademark headlamp assembly in favour of a circular LED unit and a simple bodywork. This alone gives the street fighter a whole new identity. The modifiers went on to replace the stock front fender with a high-raised plastic unit to give it an off-road feel. 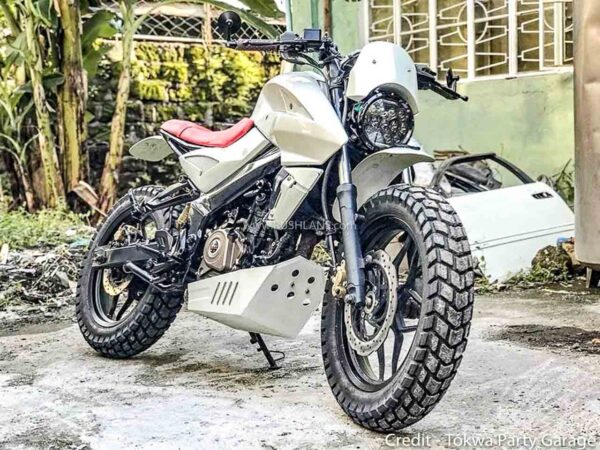 The tailpiece has been done away with and in its place lies a tastefully executed red leather saddle. The rear tyre hugger has also been deleted but the motorcycle gains a custom rear fender which is mounted on the rear sub-frame.

The motorcycle retains stock fuel tank and side panels but the silver paint job is bespoke. The scrambler also sports custom engine guard and rear-view mirrors which are mounted at either end of the handlebar.

The most significant modifications however are the humongous knobbies which are mounted on the stock alloy wheels. In addition to giving the bike a distinctive scrambler look, the tyres would also come in handy to tackle unpaved trails. Further enhancing the motorcycle’s off-road credentials is the chrome finished custom exhaust. 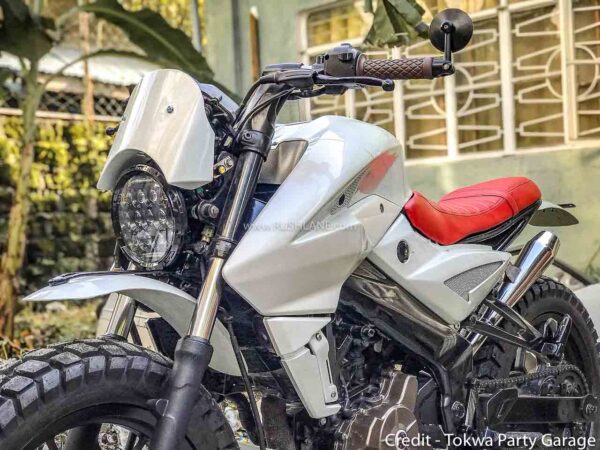 The Bajaj Pulsar NS200’s original underbelly exhaust would not allow the motorcycle to be abused too much on an off-road trail, especially if crossing streams are involved but the custom bike seem to be adequately equipped to complete that task.

The chassis, sub-frame, swing-arm, suspension system, clip-on handlebar and brakes have been retained without any modification. We don’t think the modifiers fiddled with the motorcycle’s engine and gearbox either. The Bajaj Pulsar NS200 is powered by a 199 cc single-cylinder, liquid-cooled, Triple-Spark engine which is tuned to produce 24.13 hp and 18.22 Nm of torque. Transmission is a 6-speed unit.