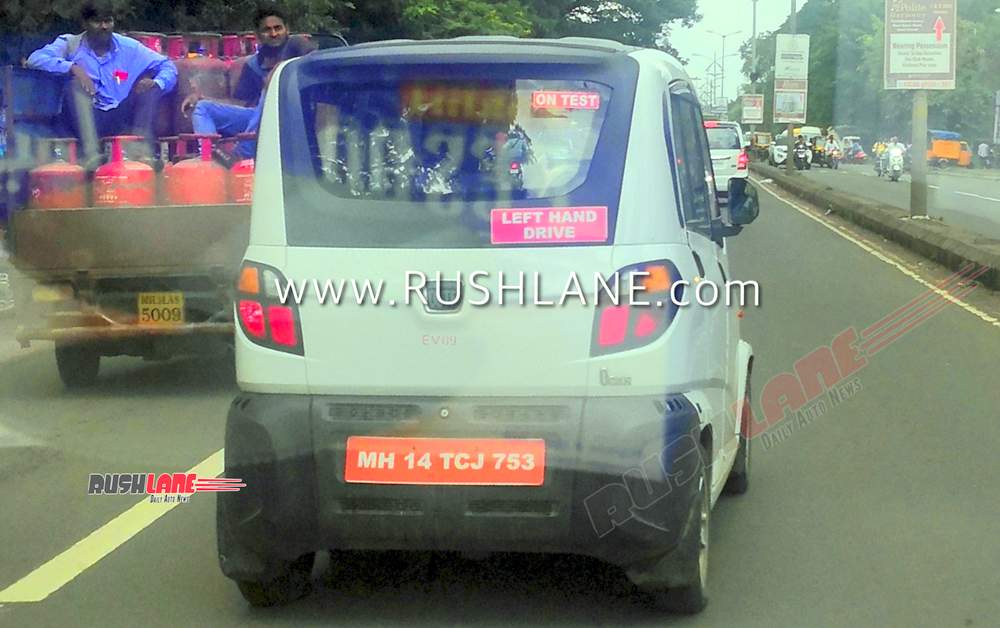 The electric revolution about which you have been reading since years, is clearly around here! 2019 has got us closer to practical EVs, be it the introduction of Kona from Hyundai or the network expansion which has been done by Ather.

Even Bajaj, which for years has stayed away from the scooter market (as a strategic decision), made its re-entry in the scooter segment with the unveiling of the Chetak electric scooter. Now, latest sphsyots from auto enthusiast Siddharth Patil confirm the existence of an all-electric Bajaj Qute, which was spotted testing near Pune.

The test-mule spotted had a ‘Q Car’ badge, potentially referring that the launch name of this EV will be Bajaj QCar or Bajaj Qute QCar. The usage of the word ‘CAR’ in badge is interesting, as Qute is not a car, but a quadricycle. The test vehicle also had a ‘Left Hand Drive’ sticker, which indicates that the electric version of the quadricycle might first get launched in the international market.

Before launching the Qute in India, Bajaj had already commenced sales of the standard Qute in multiple international markets like Russia and Turkey. The delay in India was majorly due to policy constraints which restricted the entry of a quadricycle in the Indian market.

As far as looks are concerned, there isn’t a lot of difference between the test-mule which was spotted and the standard Qute. Only change which could exist is the difference in the shape and design of alloys, though it isn’t very clear in the spy-shots.

Sales and distribution of the electric Qute QCar will most likely first commence outside India. However, it might land up sharing some parts and technology, especially in the powertrain domain with the upcoming Bajaj Chetak electric scooter.

Bajaj is expected to launch the Qute QCar Electric in India sometime next year, post the launch of Chetak EV in Jan 2020. Just like Chetak, expect QCar EV to be launched in phases, with first cities to get the electric vehicle being Pune and Bangalore.

Currently, the Qute is sold with two fuel options, petrol and CNG. Addition of an electric powertrain will take the count up to 3 fuel options. As far as pricing is concerned, the standard Qute retails around the INR 2.5 – 2.8 lakh mark. The electric Bajaj QCar will in all probability be considerably way more expensive than the standard Qute, however it will have lower per-km cost of operations.