The pure electric variant of the Bajaj Qute quadricycle has been spotted testing once again. Unlike last time, when the rear was spied, this time the front has been spotted. Thanks to automotive enthusiast Siddharth Patil. Interestingly, the first spyshots also revealed that the vehicle carried ‘Qcar’ badge instead of Qute. Bajaj has trademarked the name ‘QCAR’.

With electric vehicle revolution taking over the world at an impressive rate, the Qute EV comes as a no surprise. After a long and arduous legal battle, Bajaj won the approval to market the Qute in India but export operations would remain critical for the low-cost urban runabout’s commercial success.

Given that the prototype adopts LHD configuration, it is possible that, like the petrol-powered Qute, the electric version would launch in international markets first before coming to India. As of now, the tiny four-wheeler’s main markets are Turkey and Russia but once the electric version is ready, we could see Bajaj expanding into developed markets including Europe. 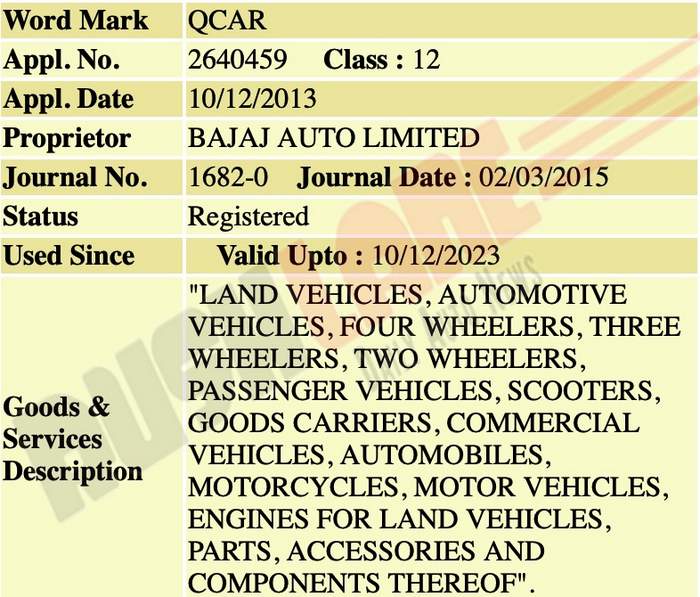 With several European metros planning on restricting fossil fueled vehicles from entering the city centers, quadricycles like the Bajaj Qute would gain increased attention. The compact footprint, zero emissions and two row of seats would make the Qute EV ideal for major European cities where parking spaces are extremely scarce.

The technical specifications of the Bajaj Qute EV are still under wraps but we expect the company to localize the electric powertrain in a bid to receive the Indian government’s FAME-II subsidy in the domestic market. We expect the electric motor to be rear-mounted and supported by a lithium-ion battery pack. The top speed is likely to be restricted to 70 kmph to comply with the quadricycle norms.

It is to be noted that, even in developed markets like Europe, the safety regulations for quadricycles are much more relaxed compared to regular passenger cars. That said, the export-spec Bajaj Qute is expected to offer standard ABS.

Bajaj recently introduced the Chetak electric scooter with Pune and Bangalore as first markets. The Qute looks set to be the second EV from the company, which will be launched in 2020. Will it be introduced under the Urbanite brand name?