BS6-implementation is not just limited to passenger vehicles, but each and every segment of the Indian automotive market. This includes Light Commercial Vehicles (LCV) and three-wheelers as well. Now, details of the upcoming Bajaj RE CNG BS6 three-wheeler have been leaked ahead of its launch.

The new BS6-compliant Bajaj RE CNG model is powered by a 236.2cc single-cylinder engine that makes a humble 9.25bhp. The torque figure is not available, but we expect it to be somewhere around 16Nm. It has a seating capacity of four passengers (including the driver), but we all know it will accompany many more in its daily runs. The engine is mated to a 4-speed transmission.

The Bajaj RE is one of the most popular three-wheelers on the Indian market and its name (along with the likes of the Piaggio Ape and Atul Auto) is synonymous to what is commonly known as the “auto-rickshaw”. In its current BS4 avatar, the Bajaj RE is available in four variants: Petrol, LPG, CNG and Diesel. The first three variants employ the same 198.88cc single-cylinder engine, but outputs stand at 10.19hp/17Nm, 9.32bhp/16Nm and 8.78bhp/14.5Nm, respectively. 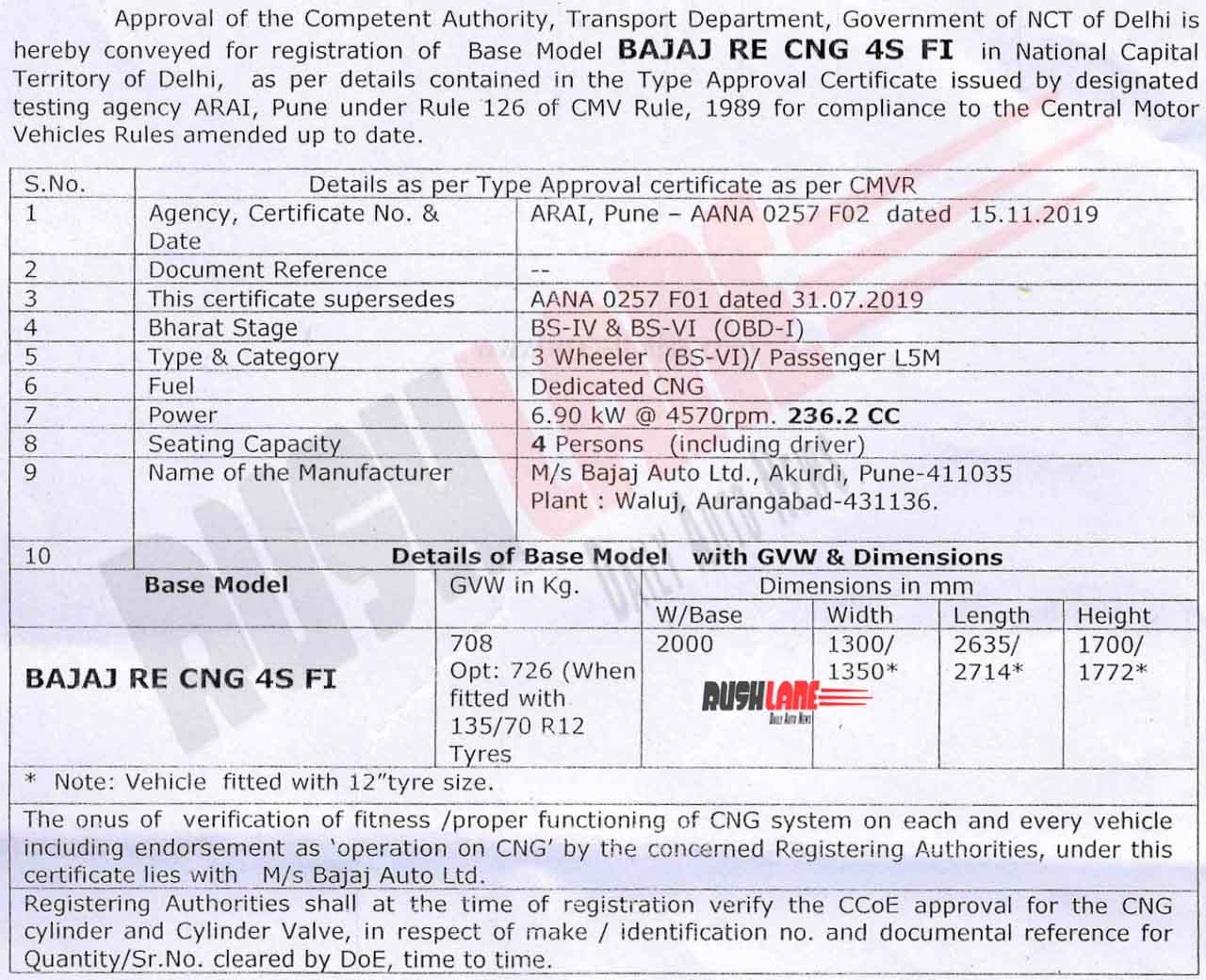 The three-wheeler is also available in a 145.45cc 2-stroke avatar with outputs of 8bhp/17Nm, 8bhp/15Nm and 8bhp/13.8Nm for the petrol, LPG and CNG lines, respectively. Coming to the diesel variant, the 470.5cc motor is good for 8.37bhp and 24Nm of torque. Unlike the other variants which employ a 4-speed transmission, the Bajaj RE Diesel comes mated to a 5-speed gearbox. Despite having varied outputs, all four variants share the same body with a dimension of 2635x1300x1700mm (LxWxH). The wheelbase stands at 2000mm.

As you may have observed, the power plant used in the upcoming BS6 model is bigger than its BS4 sibling. The peak power has gone up by almost half a bhp and from the trend, we expect the output of the petrol and LPG variants to be significantly higher. Usually, the process of updating to newer emission norms come at the cost of reduced output (if the displacement remains the same), but Bajaj Auto chose to introduce an all-new power plant with better performance figures.

The data also shows that the BS6 variant shares the same dimensions as the outgoing BS4 model. This means that if the Bajaj RE CNG comes with some exterior updates, it will be limited to minimal cosmetic enhancements or maybe, nothing at all.

As expected, prices for the BS6 versions of the Bajaj RE three-wheeler series will be higher than the current models. At present, the Bajaj RE BS4 retails from around Rs 1,10,000 ex-showroom for the base petrol 2-stroke variant.