A total of 176,337 units were sold last month, as compared to 205,259 units in November last year. However, with strong support from motorcycle exports, overall impact of negative domestic sales has been reduced significantly. Bajaj motorcycle exports witnessed 18% YoY growth in November, from 141,285 units to 167,109 units. This is the highest ever exports recorded by the company.

Talking about domestic market, the top selling Bajaj bike in November was Platina with sales of 53,015 units. However, YoY sales are down -15%, as against 62,555 units sold in November last year. Platina is also featured in the list of top 10 bestselling motorcycles in November, where it takes the 5th spot.

It may be recalled that Bajaj had launched Platina 110 H-Gear variant earlier this year in June. The updated bike is especially designed for highways and comes with new features including 5-speed gearbox and revised instrument console. 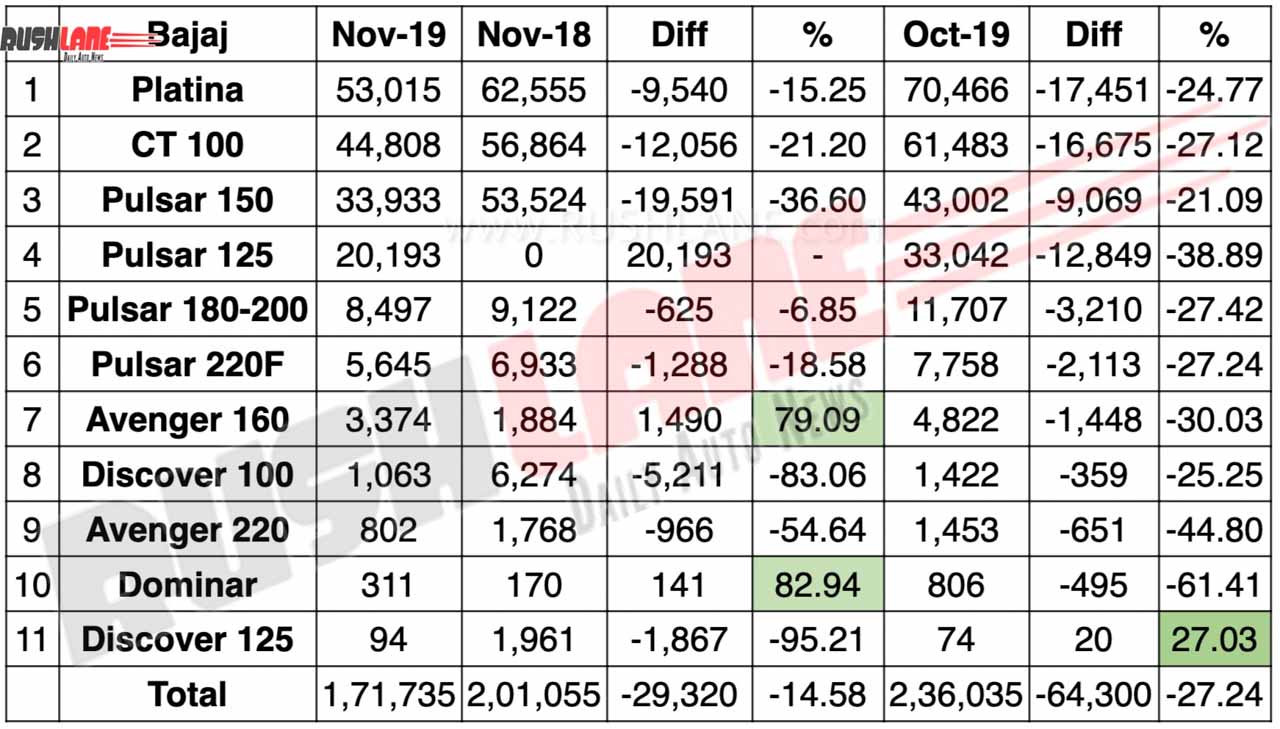 At number four, we have a new entrant Pulsar 125, which was launched earlier this year. Pulsar 125 has emerged as a popular commuter bike and it has been registering strong sales since its launch. In October, the bike reached the sales milestone of 50k units. In November 2019, Pulsar 125 registered sales of 20,193 units.

Total sales of all Pulsar range motorcycles are 68,268 units, which is YoY loss of -1.88%, as against 69,579 units sold in November last year. We can also see that Pulsar 125 appears to have cannibalised a significant chunk of Pulsar 150 sales.

At number seven, Bajaj Avenger 180 has made significant gains of around 79%. A total of 3,374 units were sold, as against 1,884 units in the same period last year. Bajaj Discover 100 takes the eighth place with its sales taking a heavy beating. Avenger 220 (802 units) is next in the list with sales more than halved, as compared to 1,768 units sold in November last year.