Meanwhile, some folks — either for just the fun of it or since they had no other choice — developed the idea of converting their vehicles into their homes; thus starting the trend of motorhomes, camper vans, caravans and RVs.

With time, such vehicles evolved into various shapes and sizes. In fact, they have grown only bigger and better, with stronger and reliable roots. However, a 23-year-old from Paramathi-Vellore in Namakkal, Tamil Nadu, has brought a whole new idea for a home-on-wheels project to the table.

PR Arun Prabhu, from the Bangalore-based design and architecture startup, Billboards, has converted a Bajaj RE three-wheeler pick-up into a house. Do not see this as just any other Indian ‘jugaad work’ since the engineering expertise and packaging efficiency that have gone into the project are quite impressive; everything made possible for just a lakh rupees within a period of five months.

As an ambitious child, Arun always wanted to achieve something in life. He has had many innovative ideas in his mind, but the concept of a home that runs on three wheels clung on. Over the years, there have been many one-off and commercial examples of four-wheeled homes.

For the same reason, a three-wheeled living space was a challenge worth taking up since a lot of factors such as stability, space utilisation, lack of reference projects, etc., had to be accounted for. However, there was one area where a three-wheeled home excelled over a four-wheeled example — cost efficiency. 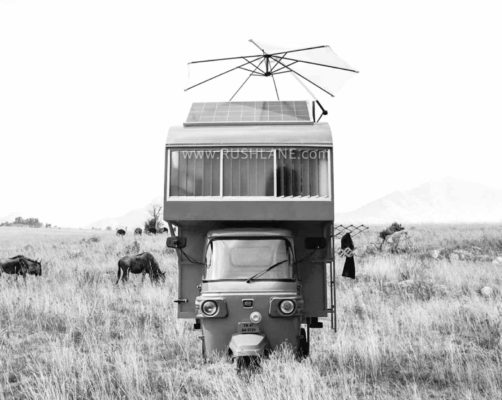 The project began with an old Bajaj three-wheeler. Arun removed its loading area and started making the basic framework using old bus parts. Of course, he had to go through a lot of research and understanding in order to make the project viable. The aim was to create a space to rest for small traders and travellers who would otherwise have to go a long way in search of one.

However, Arun’s home-on-wheels project is more than just a space to rest and is loaded with all the amenities one would ever want. Inside, there’s a bedroom (on the upper deck), bathroom, kitchen (with space to keep all the utensils), workspace, water heater and even a toilet. Speaking about the toilet, its open placement in the living area accentuates the fact that this project is meant for one-person use. There is no in-house cocoon of privacy. The whole cabin is ‘the privacy’.

The vehicle has a 250-litre water tank at the top, along with a 600W solar panel coupled to a battery inside the cabin that can power all the essential electrical equipment. Various additions such as cupboards and extendable outside cloth hangers, further increase overall practicality. The ladders and doors are placed in a way to provide the best ingress and egress possible.

The cabin is well lit with ample greenhouse. If that isn’t enough, there is a six-foot perimeter umbrella on top under which you can sit back and relax on a lounge chair, with a good view of all other conventional forms of wheels and walls across the eyes’ reach.

At least some would spend time pointing out the all the negatives and safety/stability concerns (despite having additional support columns) of the project and we do not entirely blame them. However, there’s no denying that Arun Prabhu’s interesting project is a work of art and architecture; a far cry from a mere makeshift.