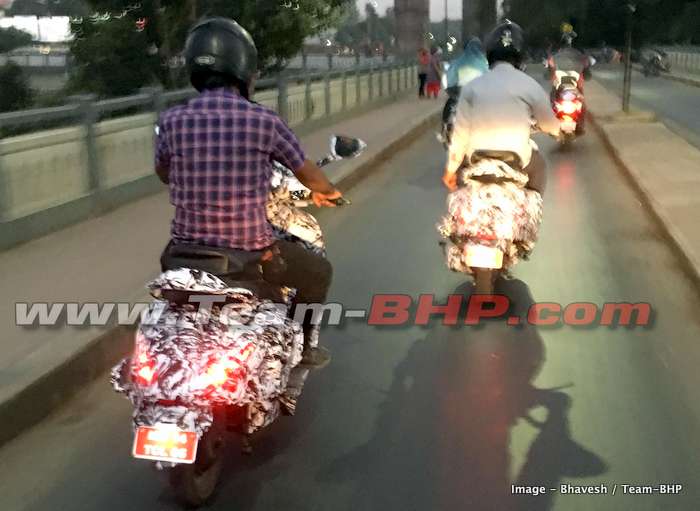 A fully camouflaged mystery scooter prototype has been spotted testing in Pune, sparking rumors that this could be the Bajaj scooter which is to be marketed under the Urbanite branding. While there is no way of deducting the prototype’s identity with absolute certainty, two top candidates emerge – Mahindra and Bajaj.

While both the brands have their R&D operations in Pune (the prototype carries MH-14 plates), we don’t think Mahindra Two Wheelers is working on any new products as of now. So, all reasoning points towards Bajaj and its Urbanite brand which is currently on the anvil.

Closer inspection of the spy shots reveal that the scooter does possess what looks like an exhaust system, indicating that an IC engine is on duty. It is to be noted that Rajiv Bajaj, Managing Director of Bajaj Auto, has gone on record multiple times to declare that an IC engined automatic scooter does not fit with the company’s scheme of things. He has even famously said – “Bajaj will make scooters when Royal Enfield will make scooters.” Below is a video of Rajiv Bajaj talking about why Bajaj will never launch scooters.

However, he also once stated that if at all Bajaj comes up with a scooter it would be fully electric. But with the latest spy shots and leaked sketches, it does seem that Bajaj will afterall go back to selling petrol scooters. Rise in demand / push from investors could have brought a change in Bajaj’s ‘only motorcycle’ philosophy.

Coming back to this mystery scooter prototype, it seems to be wearing production ready bodywork under the heavy camouflage. Interestingly, the tapering tail section with twin inclined taillights and a wide seat are inline with the sketches of the purported Bajaj Urbanite scooter which were leaked earlier this year. The Urbanite brand is slated to be introduced towards the end of this year, so it is about time the prototypes are seen in public. (Urbanite is going to be scooter brand under Bajaj Auto. It will sell petrol as well as electric scooters.)

So, does that mean the outspoken MD is going to contradict his anti-scooter sentiment and yield to pressure from stakeholders? It is possible that the Urbanite brand would be associated with IC engined automatic scooters in the initial phase before eventually moving towards electric powertrain. In any case, we will have better clarity in the coming months.

Automatic scooters have been steadily encroaching the commuter motorcycle territory in India for quite sometime now. Almost all mass market two wheeler makers in the country are convinced that their money is well spent in developing scooters. While 100-110 cc segment is where the action lies now, premium and fully electric segments are set to gain traction in the medium term. Post launch, Bajaj Urbanite scooter will take on the likes of Honda Activa.