The three member gang of thieves targeted well maintained and new looking bikes. They showed special affinity towards Royal Enfield Bullets. Their operations were busted when the Varthur police have arrested all three members of the gang who are all residents of Attibele and Anekal in Bengaluru.

Gang leader Azmath Khan (24) along with his accomplices Santosh (23) and Manjunath (25) were arrested by the Varthur police and 16 bikes valued at Rs 30 lakhs were recovered from them. The thieves were experts in cracking open the locks of these bikes in a matter of 60 seconds and learnt this tactic from a mechanic. The gang is suspected to have a group of accomplices in Tamil Nadu who helped them in selling off the stolen bikes. 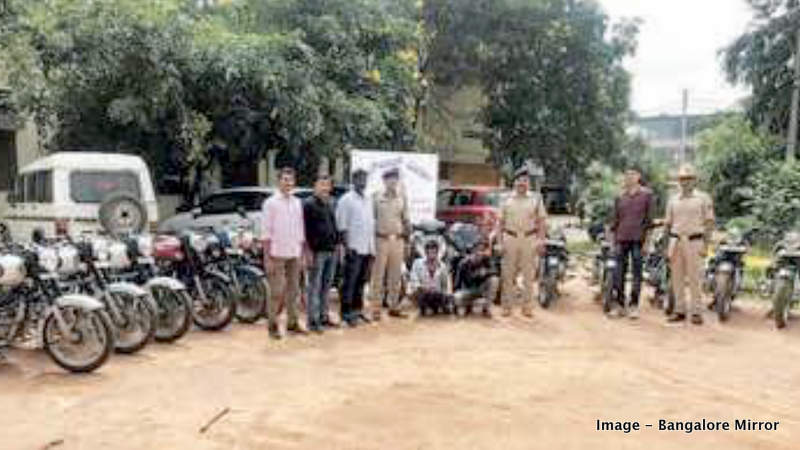 Police state that the gang used to be on the lookout for motorcycles parked outside homes. They preferred new and well maintained bikes. On identifying such a bike, the thieves would break the handle lock and push the bike to a secluded sport where they would hot wire the bike and speed off all in a matter of minutes.

Bikes recovered from them included 10 Royal Enfield Bullets, 2 KTM Dukes and 2 Bajaj Pulsars besides a Hero Splendor and a Honda Dio. The bikes were all stolen from Varthur, Suddaguntepalya, Tilak Nagar, Mico Layout police station limits.

Upon arrest, the trio, who are all school dropouts, has stated that they found ready buyers for these high end bikes at rates as low as Rs 20,000-30,000. The gang recently stole a Royal Enfield Bullet from Varthur police station limits which led to their arrest. The police team headed by Police Inspector B Ramachandra zeroed in on the culprits with the help of informants.

Following these arrests, the police have appealed to citizens to ensure that bikes are parked properly, install GPS and ensure double locking so as to deter thieves from making away with bikes. Anti theft devices and apps are also available through police stations as was recently done in KR Puram.