The middleweight segment high performance motorcycles have been seeing increased demand. Many global manufacturers such as Honda, Triumph, Kawasaki and others will be bringing in new middleweight sports bikes in the coming months.

Italian motorcycle brand Benelli will also introduce its highly anticipated fully-faired motorcycle- 600RR soon which is based upon the foundation laid by TNT 600. The TNT 600 went on sale in various markets earlier this year. Now, Benelli’s parent company Qianjiang Group has officially revealed its upcoming QJ SRG600 in China.

For the uninitiated, Qianjiang Group is most likely to rebadge the SRG600 to Benelli 600RR in many international markets including India. Having taken over the Italian brand Benelli in 2005, the Chinese manufacturer has been responsible for designing and manufacturing all Benelli bikes since. 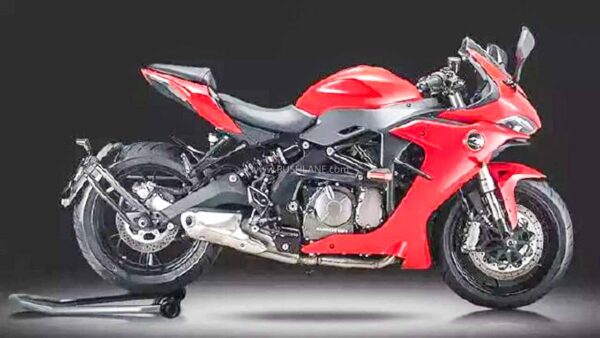 As we already know, the upcoming 600RR or SRG600 shares underpinnings with its naked streetfighter counterpart TNT 600. It is rather a simple design considering modern fully-faired sports bikes. There are no flashy body-graphics or decals usually visible on fully-faired motorcycles on this segment. Overall it looks neat with sharp lines at front highlighted by the split headlight setup.

Other notable highlights include a small air-intake unit which is positioned neatly underneath the headlamps, fairing-mounted rearview mirrors and a nameplate attached to the minuscule fender at rear wheel. The clip-on handlebars complemented by a sloping muscular fuel tank and rear-set footpegs suggest that the riding stance is inclined towards being an aggressive forward-leaning position. It also receives a raised windshield and blacked-out alloy wheels.

While the 600RR might not be the best looking in its segment it is certainly large in size and gives out the ‘big bike’ vibe. It is built upon a trellis frame while suspension units and brakes are carried from TNT 600. Which means it gets inverted forks at front and an offset mono-shock unit at rear. Whereas anchoring duties are carried out by dual discs at front wheel and a single disc at rear wheel.

The bike receives an all-LED lighting setup, a keyless ignition and a full-colour TFT display. To ensure better safety for riders, the SRG600 is equipped with dual-channel ABS to avoid skidding on roads in case of hard braking.

Performance is the most crucial aspect of this middleweight sports bike. The SRG600 draws its power from a 600cc liquid-cooled inline four-cylinder motor, the same which powers Benelli TNT 600. This unit is capable of producing 80.4 bhp and 55 Nm of peak torque on TNT600, though output figures on SRG600 are yet to be revealed. Transmission duties will be carried out by a six-speed gearbox that gets a quick shifter.

Will it come to India?

Benelli has aggressive plans for India as it has already announced upgradation of seven models to BS6 emission norms. Benelli 600RR is expected to be launched in the Indian market, although there has been no word on its launch timeline yet.