To boost sales of Imperiale 400 during the festive season, Benelli has launched an easy EMI scheme wherein users just need to pay Rs 4,999 per month. Under this scheme, customers can get funding of up to 85 percent of the bike’s cost. With this scheme, Benelli is aiming to make ownership a lot more convenient for customers.

The plan seems especially relevant in the current scenario where a number of people have been facing financial challenges due to the global Covid-19 crisis. The company wants to ensure that the current pandemic situation does not become a hindrance to those who are interested in buying the Italian classic.

BS6 Imperiale 400 is priced at Rs 1.99 lakh. In comparison, rivals Royal Enfield Classic 350 and Jawa are offered at a starting price of Rs 1.60 lakh and 1.73 lakh, respectively. Imperiale 400 had gotten off to a good start at the time of its launch with more than 1,200 bookings received in 10 days. By December 2019, bookings had crossed the 4k mark. After the lockdown blues, it remains to be seen if the company’s new low cost EMI scheme can help boost sales during the festive season.

In addition to Royal Enfield and Jawa, Benelli will soon have to contend with yet another motorcycle in the segment. Honda has announced the launch of a new cruiser motorcycle for 30th Sep. Though they have not revealed what engine size this new motorcycle will be, it is expected to be in the 300-500 cc segment.

As may be recalled, Benelli Imperiale 400 was launched in India in October 2019. At that time, the motorcycle was aggressively priced at Rs 1.69 lakh. To make it more attractive for customers, Benelli had offered best-in-class warranty of 3 years / unlimited kilometres. Another major benefit was two years of complimentary free service. These schemes are available even with the current BS6 model that was launched earlier this year in July.

Featuring smooth curves and a seamless design, Imperiale 400 is synonymous with beauty and elegance. The motorcycle derives inspiration from the Benelli-MotoBi range that was in production in the 1950s. It comes with vintage styling, as is evident in the round headlamp, teardrop shaped fuel tank and indicators, and liberal use of chrome inserts. Available colour options are Silver, Black and Red. The Black and Red variants cost Rs 10k more than the Silver variant. There is also a new White Colour on offer, but that has not been launched in India yet. 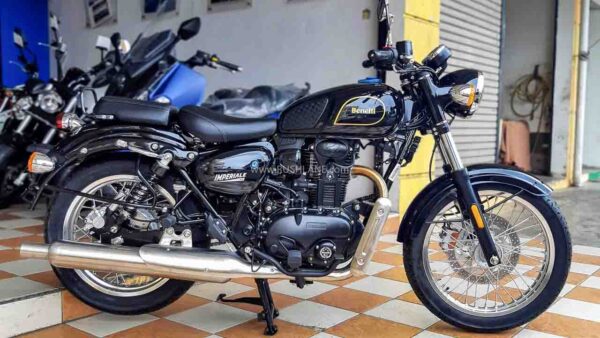 Imperiale 400 is powered by a 374 cc, SOHC, air cooled, single cylinder engine that is capable of generating 21 ps of max power at 6000 rpm and 29 Nm of max torque at 3500 rpm. This is mated to a 5-speed gearbox and multidisc wet clutch.