Things have just got a lot more exciting in the middleweight adventure tourer bike segment with the launch of new Benelli TRK 502 and Benelli TRK 502X. Competitively priced from Rs 5 lakh, Benelli TRK 502 bikes offer a compelling proposition to bike enthusiasts. Here’s a quick comparison between Benelli TRK 502X vs Kawasaki Versys 650 vs Suzuki V Strom to understand which bike will be most appropriate for you.

Design and Dimensions: All three bikes look stunning and are designed to be head turners. It’s up to you to decide which design you prefer most. All three are designed to offer the best in power, performance and high-end features. Benelli TRK 502X is widest and tallest of the three and takes the second spot in terms of length and wheelbase. Suzuki V-Strom 650 ABS comes at first position in terms of length and it also has the longest wheelbase.

Engine: Both TRK and Versys have parallel twin cylinder arrangement whereas V-Strom utilizes V-Twin cylinder engine. Benelli TRK 502X is powered by a 500 cc engine that delivers 47.5 hp of max power and 46 Nm of max torque. Versys and V-Strom have 649 cc and 645 cc engine, respectively, so naturally their power and torque output is greater than TRK 502X. Of the three, V-Strom has the highest power output of 70 hp whereas Versys has the highest torque of 64 Nm.

Chassis, Braking and Suspension: TRK 502X and V-Strom utilize Trellis Frame whereas Versys has Diamond Frame. TRK 502X and Versys have 50 mm USD and 41 mm adjustable USD, respectively, whereas V-Strom has telescopic suspension at the front. All three bikes have mono-shock suspension at the rear. All three bikes have front and rear disc brakes and offer dual-channel, switchable ABS. 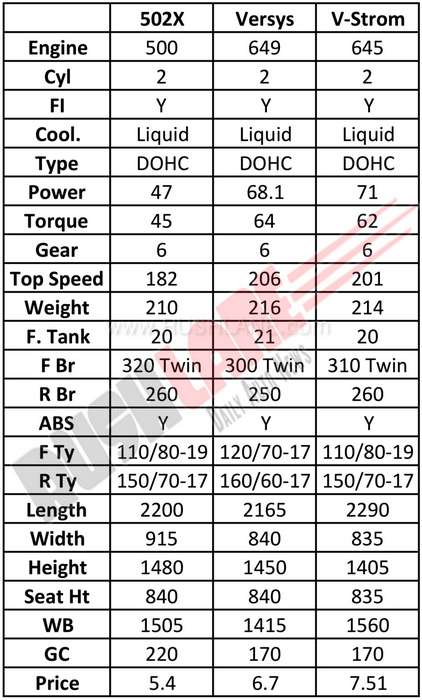 All three bikes are comparable in terms of design and styling. If power is your thing, you can go for either Kawasaki Versys 650 or Suzuki V-Strom 650 ABS. If you are looking for an optimal combination of power & performance and affordability, you can surely consider Benelli TRK 502X.