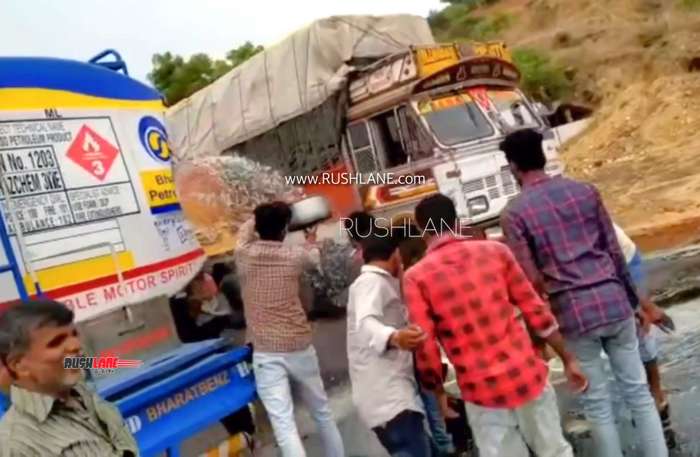 Trucks carry all sorts of things. In case of an accident, when the items carried by the truck falls on the road, people usually gather and start stealing the things which the truck is carrying. We have seen videos of people stealing these items.

From fruits and vegetables to beer and whisky bottles, people basically take home whatever they can get their hands on at the accident site. But putting your life in danger to get a few liters of fuel for free? That is a new level achieved by the human race.

Yes. That is exactly what is happening in the video below. A Bharat Petroleum tanker collides with another truck, which results in fuel tank leaking. The incident reportedly took place in Murdeshwar, a small town in Karnataka, famous for its beaches. Bharat Petroleum truck loaded with fuel tank, was making a right turn, as it was heading to a petrol pump to deliver fuel. What happens next, can be seen in the video below.

It is at this time that a truck from behind, crashed into the Bharat Petroleum tanker, which was turning right. The reason of accident is not clear. Whether the BP truck failed to give proper signal, or the truck driver failed to notice the signal or was there a malfunction of brakes. What is clear, is that the impact was enough for the fuel tanker to rupture from behind. Which results in fuel leaking from the tanker. This is a really dangerous situation, not to mind there is a fuel station just a few meters away.

Initially, the crowd runs away, realizing that the BP tanker is leaking fuel on to the road. But as time passes, and nothing happens, some dare devils decide to collect the leaking fuel in utensils. Seeing them, others also join. And in some time, there are scores of people who are standing in queue, next to the leaking tanker, which is holding thousands of liters of highly flammable motor fuel.

Some are collecting fuel, while others are recording video on their phone. In all this, there are vehicles on the road which have started crossing the leaking truck. This is utter chaos. A small spark, which could have caused either via the mobile phones which are recording videos, or by vehicles passing by, and this could have been a deadly accident. Luckily, nothing happened. People dispersed once the fuel stopped leaking. Police is investigating the case.