The GT platform being so unique, does not have any direct competitors and BMW has tastefully amalgamated features of 3 cars in one, yes – Crosssover looks of the X6 series, interior space like that of a 7 series and a price tag which is in the 5 series zone (With added premium of course)!

Since the GT is priced closer to the 5 Series and its direct competition, frequent comparison with the 5er is inevitable, however the GT would be eyeing the recently launched LWB version of the Mercedes Benz E Class. Let the sparring commence. 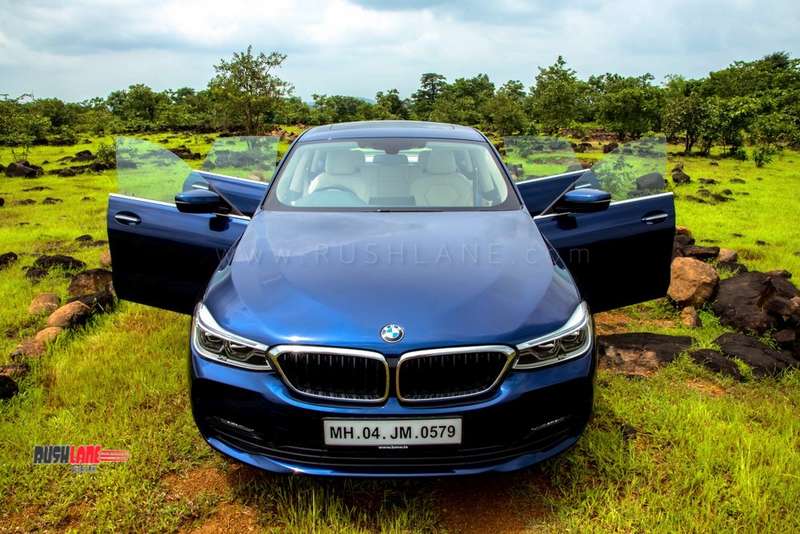 Design and Styling – It is said, that the 6 Series GT replaces the outgoing 5 series GT and also BMW India`s answer to the Mercedes E class LWB. Well, in our books, the 6 Series GT carves a place for itself and offers better bits from its various cousins. While we have already had the Gran Turismo based on the 3 series, the 6 series is a fresh ground up approach.

Before we get in to the other bits of styling, the first thing that hits one is its sheer size, the proportions are absolutely enormous. The wheelbase at 3070mm is just 9mm shy of the LWB Mercedes` E class, and a full 95mm longer when placed next to its 5 series cousin. Add to it, its lift back body style that adds to the visual vastness of the car. 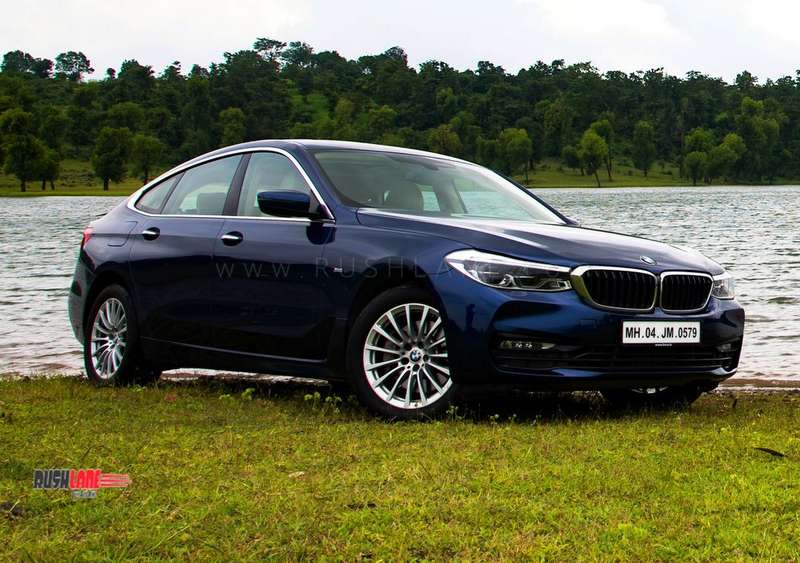 As with other dimensions on the GT, the front end appears to be stretched. The kidney grille for instance, is wider than that on the 5, of course it retains the clever Active Air Stream kidney grille feature which not only helps with the elegance but also reduces the coefficient of drag. The twin barrel Adaptive LED headlights with light tubes are a standard affair and lend the front a very purposeful and sharp look while the lower part of the bumper has more conventional horizontal slats than sculpted air dams lending it a wide looking stance. All in all, BMW hasn`t been too aggressive with the front end of the GT.

Viewed from the side, the stretch of a wheel base is clearly evident, while the toned down accents on the Air Curtain on the front fenders is another cue that the GT is biased more towards individuality and function than loud design elements. The steeply raked roof that flows into the rear hatch does better justice to the GT philosophy in comparison to the stubby rear end of the 5 Series GT. BMW designers have gone a step further to reduce the visual bulk by giving the LED tail lamps a recessed 3D look. 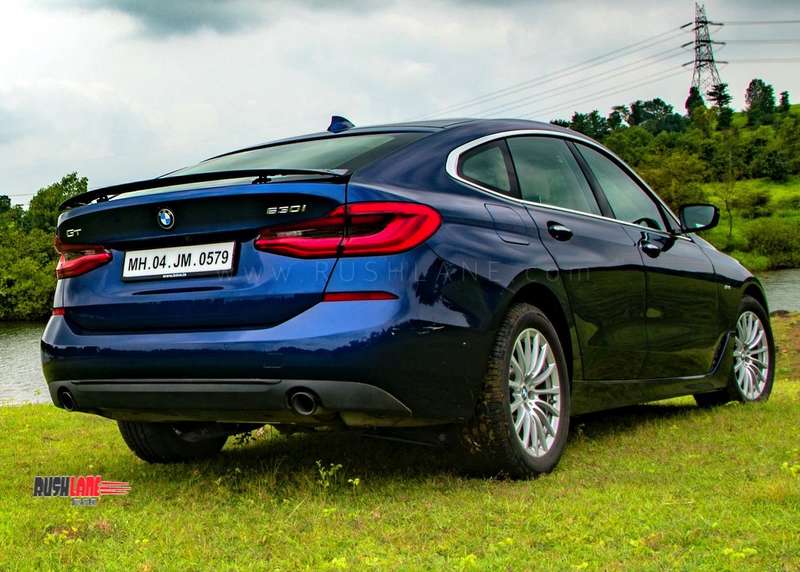 This plays very well with the concave-ish profile of the tail gate which is further enhanced by the spoiler lip. Speaking of which, as seen on the 3 Series GT, the latest avatar also retains the automatic spoiler that extends on speeds over 110 kmph giving it characteristics of sporty elegance. Let`s not forget the sexy rimless doors that we all have come to love so much and they sure do add to the GT`s unique character.

Even though this GT massively bigger than the 5 Series, BMW has made use of its BMW Efficient Light Weight construction technology. This essentially is intelligent use of high tensile steel, aluminium and magnesium parts to improve its driving dynamics and chassis stiffness all the while reducing the kerb weight. This is especially noteworthy given the GT comes with a massive panaromic sun roof which not only adds to the weight but also calls for additional measures to retain the structural integrity of the chassis. 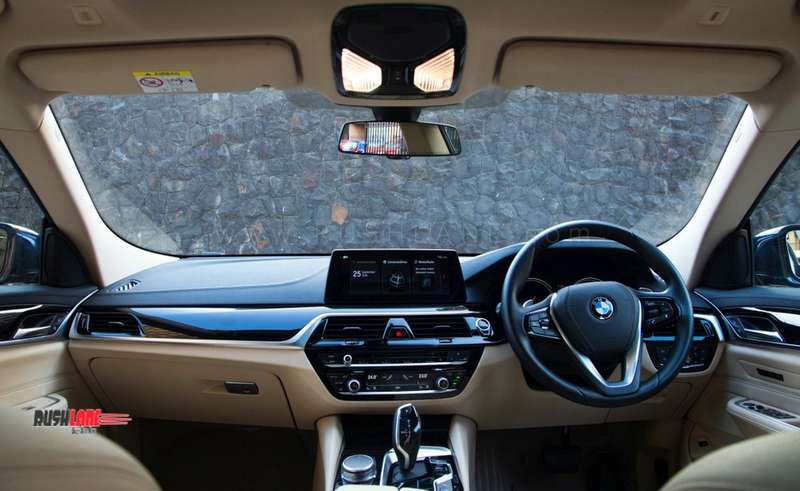 Interiors – Now we already know that dimensionally, the GT is a huge car, and, all those huge proportions translate into a spacious cabin – the rear passenger space to be specific. To start with, the GT pampers its rear occupants with leg room which nearly reminds us of the 7 series. Individual 4 zone climate control, electrically operated sun blinds, additional B pillar mounted AC vents, 10.2” tiltable HD screens – you name it, the GT has it. Oh wait, lets not forget the individually reclining rear seat backs, although the E Class LWB gives you more degree of recline, this comfort adding feature on the GT just cannot be discounted.

The panaromic sun roof, bright interiors draped in leather Dakota Ivory White with contrast stitching and the extra Alcantara head cushions add to the airy feel of the GT`s interiors. The GT loses by a bit of a margin when it comes to the absolute cushy-ness of the rear seats where the E class marches ahead. Another trick up the GT`s sleeve is its full Air Suspension which helps it claw back not only on the rear seat comfort, but also its overall ride quality and balance.

Step in the front seats and the GT greets you with a typical BMW-esque focussed, driver centric cabin, similar to the 5 series, very similar. A quick glance through the steering wheel reveals the same 12.3” Multifunction Instrument Display with black panel technology and various colours and graphics linked to the driving modes. The dashboard top is now covered with what BMW calls Sensatec artificial leather whereas the 10.25” touch display with BMW Gesture control and configurable home screen remains permanently perched up the dash. 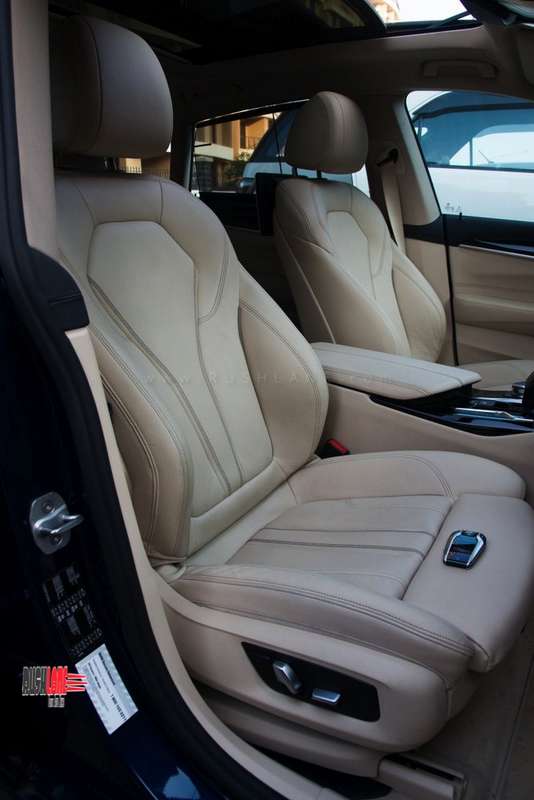 Generally, the GT`s cabin mirror`s that of it`s 5 series cousin with the same high quality fit and finish, however we found some of the touch controls a bit too tiny and fiddly – take for instance the air con blower speed, they could have been a bit bigger. So while the rear cabin space is biased towards comfort, the front seats are dedicated to enjoy the involving drive experience that a BMW provides.

The driver seat along with the memory settings, offers generous support and bolstering while not being overtly sporty and also come with manually adjustable thigh support. The all new 6 Series GT comes with a thumping 600w 16 speaker Harman Kardon sound system, ambient lighting with 6 different colour combinations and a back lit door sill finishers with lettering signifying the trim.

The GT boasts of a 610litre boot space which can be further enhanced to a whopping 1800 litres upon laying down the 40:20:40 split seats with electric function. Our test car did come with the space saver, it instead came with a puncture repair kit and electric pump neatly tucked under the boot floor. The boot floor also comes with a hydraulic damper which holds it up in place saving you the hassle – neat! 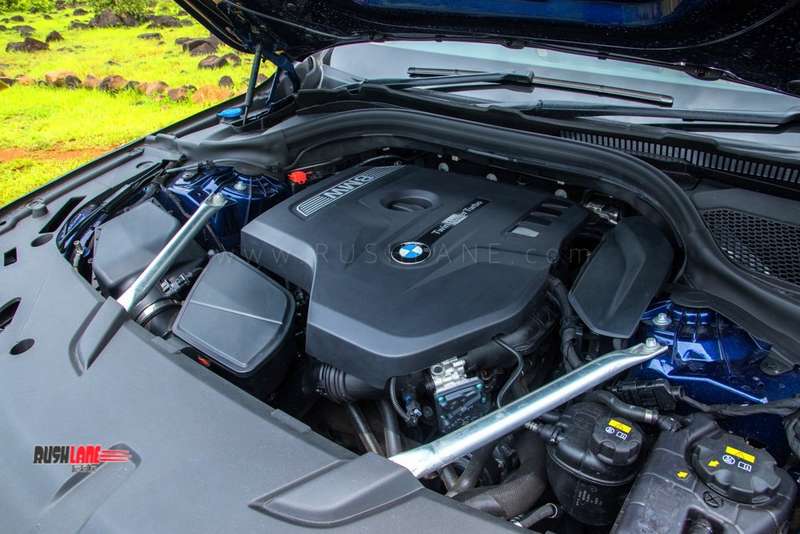 Engine, Transmission and Handling – We tested the GT in the 630i guise as originally launched. This, similar to the other 30i`s from the BMW stable, employs BMW`s Twin Power Turbo – a 2 litre 4 banger petrol motor that delivers 258hp and a staggering 400Nm of twist power. This power unit is capable of propelling the GT from 0-100 in a scant 6.3secs aided by a 8 speed Steptronic Sport transmission.

The GT has also been made available with the oil burner variant, the 630d. This however, true to its nomenclature employs a 3 litre, straight six with the Twin Power Turbo tech outputting 265hp and 620Nm of torque. Going by the numbers alone, we are sure of it can inch ahead of the 630i when it comes to a 0-100 dash in 6.1secs as claimed by BMW.

Coming back to the 630i, now we, like all BMW fans have moped enough about how much we miss the 3 litre straight six that did justice to the moniker, just the thought of which can make any BMW purist salivate. But, we have what we have and to its credit, the 2 litre Twin Power is a potent unit, the GT is no slouch. The Twin Turbo ensures there is minimal perceptible turbo lag which is further negated by the clever 8 speed auto. The performance can be summed up in one word – deceptive.

This 2 litre motor eagerly revs up to its 6500rpm redline making hasty progress without any drama whatsoever, seldom letting the driver know of the 1.8 tonne kerb weight being propelled forward. BMW`s proprietary drive modes for the GT include the Sport, Comfort, Ecopro and Adaptive too! Since the GT is suspended on Adaptive 2-Axle Air Suspension, it further gives the GT the capability of manually raising the ride height by 20mm if the terrain conditions call for it. The air suspension also complements the Dynamic Damper Control as well as the assortment of mechatronic wizardry to make the GT very sure footed unlike most air sprung cars which exhibit a degree of suppleness. 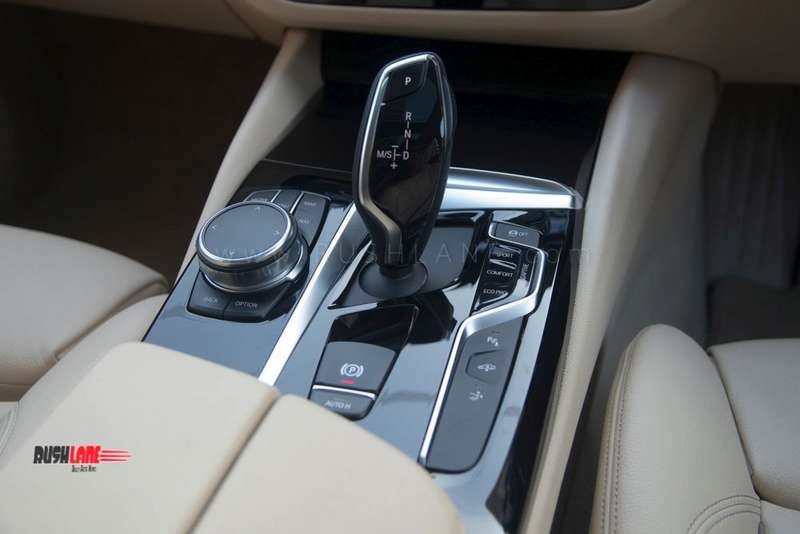 As the driving modes are self-explanatory, we found the Adaptive mode to be best suited for any driving condition and driver mood as it continually keeps adjusting the response based on the feedback it receives from bazillion sensors in and around the car. This mode also saves one from the hassle of having to manually toggle between the drive modes be it the ultra optimal EcoPro mode of the full monty of the Sport mode.

The GT is shod with rather chunky 245/50 R18 tyres don`t scream sporty even if its on the Sportline trim. What the GT manages with the suspension as well as tyre-wheel package is a confident and cossetted ride quality. The air springs do a better job of isolating minor undulations and bumps in a very sophisticated manner without giving out even an ounce of a hint that this car is air sprung – thank you, no wallowy ride which can get nauseating over extended periods of time. Stick it in the Sport mode and the GT rewards you with a sprightly performance for a car of its proportions, the transmissions becomes so intuitive that use of the steering mounted pedals is hardly called for. 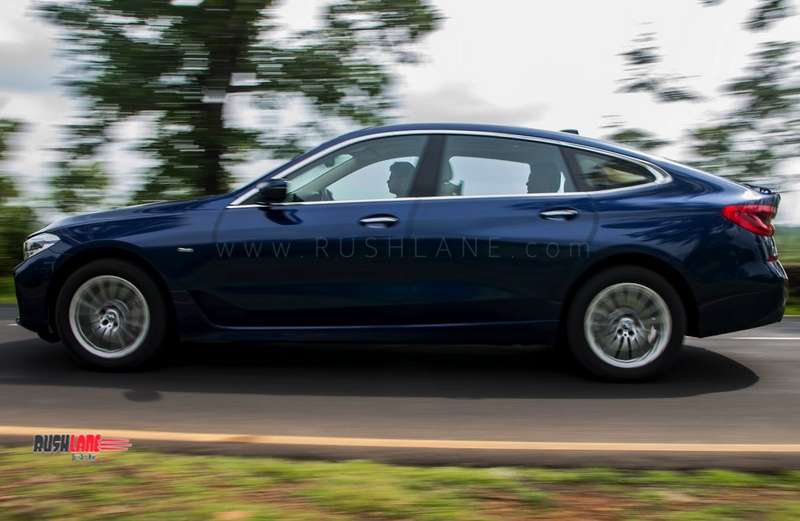 At 124mm, the ground clearance is quite low given the car`s expansive footprint, hence the ability to be able to lift it by 20mm (applicable till 35kmph) is a god send, however we are happy to report that not once did the GT scrub its belly on any of the speed bumps even with 4 on board.

It would obviously be criminal to expect 5 series like handling demeanour from the GT as the focus has been shifted to the back seat comfort but at the same time it`s a BMW and the driving dynamics are a treat if driven judiciously. Speaking of fuel economy numbers, the GT returns around 7-8kmpl within the city and the numbers bump up to 11kmpl on the highways, a 68 litre tank gives a 600km range on a full tank.

Verdict – The GT is one of its kind offering from the Bavarian manufacturer and fills in the gaps left by the 5 Series taking the battle to the E class LWB. The Grand Turismo platform is predominantly known for its touring platform offering great practicality over the 5 series while adding a touch of individuality to the ownership experience as well. The GT demands a premium of roughly 7-8 lacs over the similarly specced 5 series but also offers a long list of equipment and lets not forget the exclusivity on offer either. The GT certainly packs a punch and positions itself well with a platform unlike any other commanding the price tag.