The international motorcycle market since the past few years is surging with the development of low displacement motorcycles which are intended to sell in volumes while introducing a whole new consumer base to motorcycling. Flagship models are tech loaded and have become quite expensive over the years, deterring a lot of buyers who may pick up motorcycling as a fleeting hobby.

One of the first manufacturers to introduce a budget range of motorcycles was KTM which saw a development of the Duke & RC series sharing most of the components to keep production costs down. The formula has been a resounding success for KTM which is doing well both internationally and in the domestic market of India where its manufactured. The design and tech of KTM combined with Bajaj Auto’s production shrewdness has set a benchmark in industry to expect feature loaded performance motorcycles without breaking the bank. 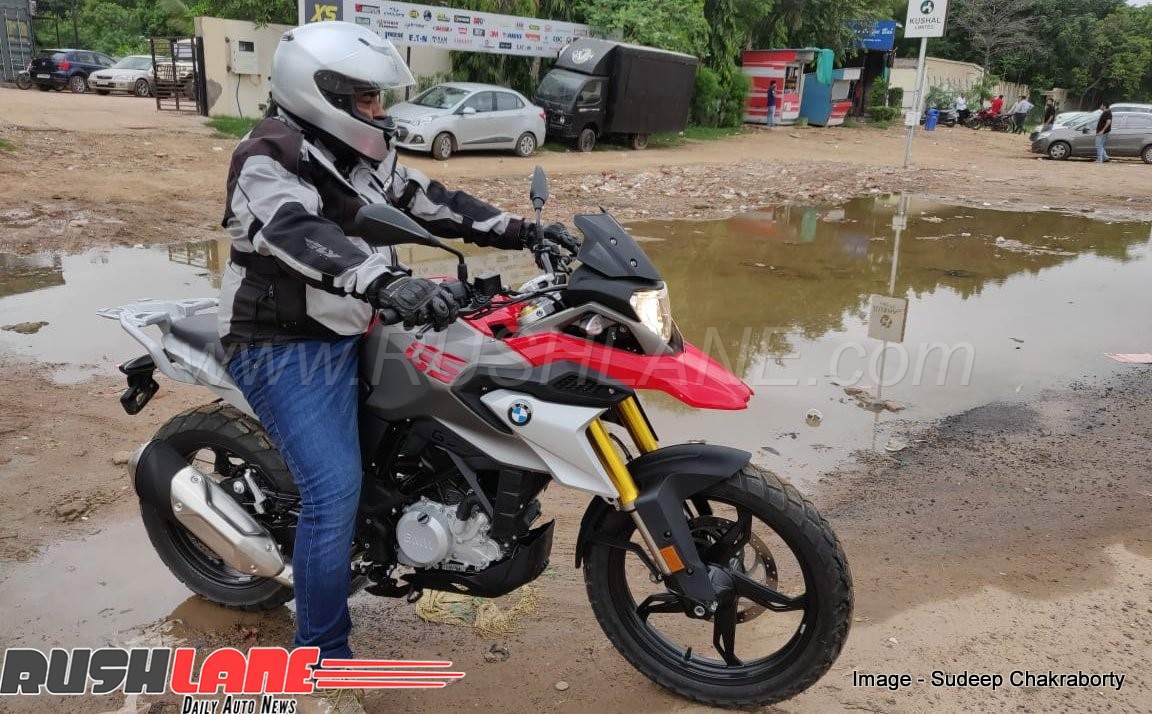 After some years the BMW-TVS technical collaboration came to light. The 310cc single cylinder mill found its way into the TVS Apache 310 which was fairly priced in the Indian market. However the motorcycles that the market was eagerly waiting for, the BMW G 310R and G 310GS were nowhere on the launch schedule despite rumours doing the rounds several times. Both these models have been on sale in the international market for two years. The key was the pricing in Indian market, where expectations were like KTM’s dual pricing where the international export models were significantly more expensive than the domestic models. On top of that the BMW G310R was priced lower than the Duke 390 in the international market so that set some further expectations here.

Finally in July 2018 both the BMW G310R and G310GS were launched with the ex-showroom pricing of Rs 2.99 and 3.49 lakhs respectively. The onroad pricing varies state to state due to the RTO taxes but it still makes both of the offerings mostly out of reach for most consumers looking for a basic street or adv motorcycle. Anyhow to give a fair verdict until the bikes are ridden its not fair to call the curtains on them.

The BMW G310GS is the motorcycle every touring enthusiast have been waiting for since it came into existence. The cost was the key and now at Rs 3.45 lakh ex-showroom is it the motorcycle that everyone was expecting?

BMW Showroom Experience – I walk into the BMW showroom and see the display pieces which look premium enough surrounded by the rest of the bigger BMW offerings like the GS1200, K1600, S1000RR. The smaller BMWs are adorned with premium plastics and switchgear and they do not feel flimsy or cheap rigid panels, the switchgear is nice and has a plush feel to it. The finishing on the forks, pedals and rims are quite satisfactory to look at. The saddle itself is welcoming to the rider and the seat quality is great as well. I complete the formalities for the form and take the key for the 310 GS which would primarily be the motorcycle of interest. 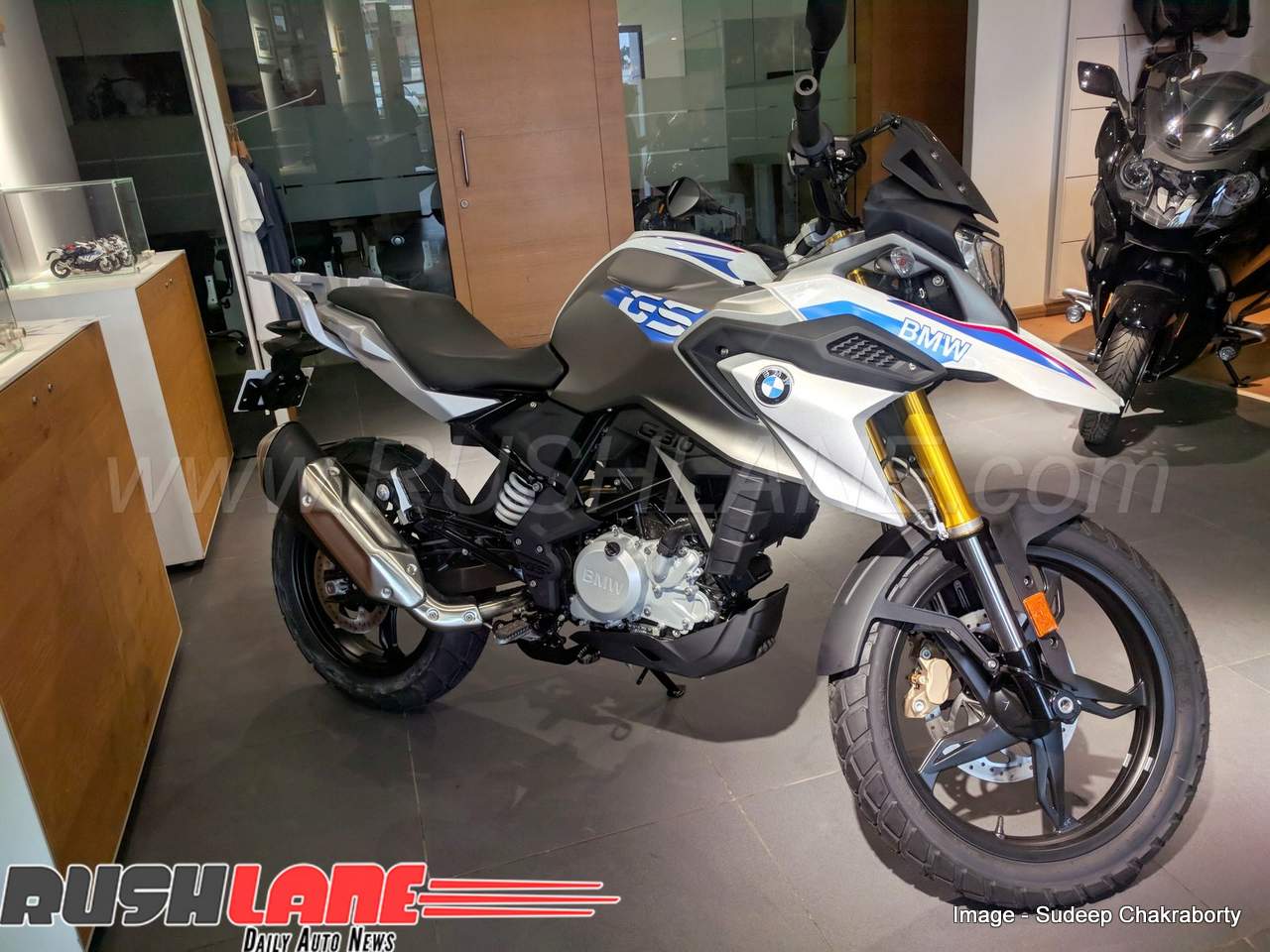 The Riding Experience – I take the key of the GS and start the motorcycle up. It fires up quickly and settles into the idle rpm. Sounds fairly clunky and as if its knocking. However that’s a characteristic of all single cylinder mills with a light crankshaft. They simply don’t have the damping properties of a multicylinder engine, have to make do with a counterbalancer to iron out the vibes as much as possible.

I pull in the clutch and roll out of the showroom premises and I almost stall the bike, save for the last moment clutching in. There’s barely any torque to get the GS moving at rpms below 4k. Even a start stop in traffic requires plenty of throttle input to really get it going. While the clutch is light and does not cause strain, the lack of torque is not a pleasant feeling for a motorcycle which has the GS badge on it.

Once the traffic subsides I give the throttle a lot of input and finally post 5k rpm the engine starts to surge and by 7k rpm it finally feels like a brisk quarter-liter segment motorcycle. Also at this point the audible harshness of the engine is gone and is now humming merrily away. Between 6-9k rpm is where the fun lies in this engine, which is the same state of tune as the TVS Apache 310. The GS responds eagerly in this rev range and if allowed to drop below 4k rpm it requires careful input so as not to stall the motorcycle on an incline. The engine has hardly any lugging capacity at low rpms and it definitely feels unwise to do so in the risk of damaging the engine. Keeping it revv happy is the only way to make it adapt to changes in the road conditions.

I soon encounter the first massive speed bump in the city and I let the GS glide over it, without rising up from the saddle. The suspension beautifully soaks the bump up and doesn’t let much of the jerk transmit to the handlebars or the spine. That is a huge plus for the GS as suspension is one of the key factors to ride comfortably in India where the road conditions keep changing abruptly. Next I turn off the main road and into a not so well maintained road let the GS loose. The GS glides over the small potholes and surface imperfections with ease, while the very evident lightweight build of the GS gives an agile feeling. This is excellent as lightweight and agility are sorely missed when doing the beaten path as its much less tiring than managing a big, burly adv motorcycle that takes more than one person to lift it up during a fall. 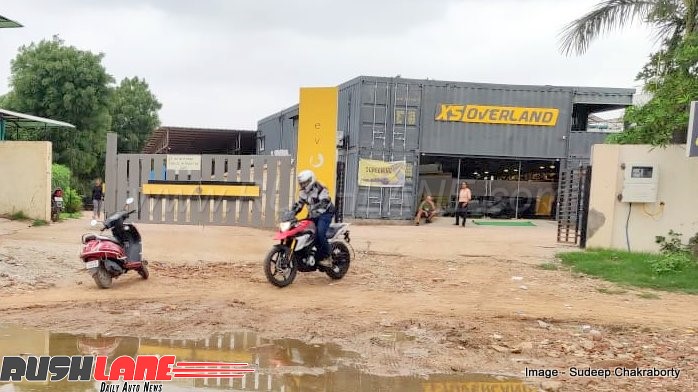 I notice that while tackling the ill maintained tarmac, I’ve completely forgotten about the saddle itself. The seating is absolutely spot on, coupled with the suspension; your posterior is finally happy that you’ve not chosen to sacrifice it in the name of adventure touring and manliness. This is definitely an all day touring motorcycle and pulling 10+ hours should be a commonly doable task. Till date motorcyclists have always compromised on the saddle in the name of performance but finally there’s motorcycle that can do both, almost.

I head to an 4X4 offroad establishment where the entrance itself is like an offroad welcome. I stand on the footpegs and the GS is a joy to maneuver at the low speeds, however I am soon slapped with the fact that I have to revv it high enough to not let it stall.

I head back to the showroom after doing a few more ill maintained roads, not bothering to check the top speed as its irrelevant on an adv motorcycle. The GS is capable of 110-120kph all day without stressing the engine which is important to its longevity. I reach the showroom and hand over the keys.

I am left disappointed. The GS has everything that a budget adv tourer should have. It just missed out on one huge factor. It comes with the wrong engine, or at least in the wrong state of tune. The peak torque of 28Nm @ 7500 rpm is one big sore thumb that makes you question the GS badge. The motor always needs to be kept above 5k rpm to tap some of the max 28Nm torque at disposal. The eagerness to stall at near idle speeds on inclines doesn’t help either.

Now why is torque so important for an adv tourer? As a tourer you do not always give it the beans and the engine isn’t meant to be red-lined all day. Most of the established tourers on the market have one thing in common, that is the mid range torque which is available from as low as 3k rpm. That is the key to relaxed riding all day long and immensely helpful offroad where you dont have to rev the nuts off the engine to get out of a mud trail. The GS will definitely have hard time with a rider and pillion on board with luggage while navigating through rough roads, inclines and mud. 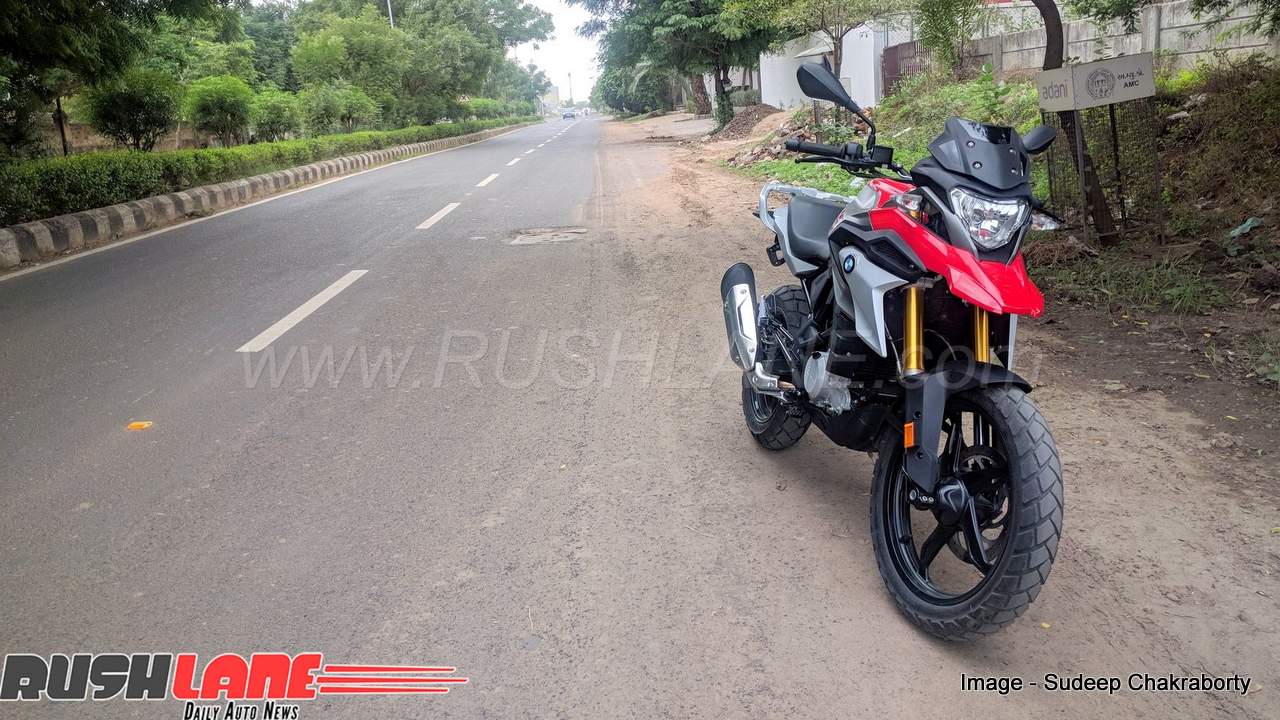 Yes the 310GS will manage somehow since people have been traveling to harsh places even on Splendors, Crux, Platinas. But that is not the point after paying so much for supposedly purpose built adv. An ADV motorcycle is supposed to be relaxed and happily alive at half of its rpm range where its producing most of its torque.

The 310GS has everything one hopes for in a quarter liter adv motorcycle except the engine is sorely mismatched for the purpose. The fact that the engine has the same state of tune as the Apache 310 which is intended to be a sports / track machine is a mockery in the name of selling a GS. Even the small 11 ltr tank doesn’t seem that big a deterrent than the engine itself.

Such a downer after the rather high sticker price of Rs 3.49 lakh, in which the only differences from the Apache 310 are the suspension travel and the larger 19″ front wheel is a complete rip off. Essentially you’re just paying for the BMW badge on an engine that doesn’t belong on an adv tourer. If one rides solely on tarmac, one could live with it.

But then at the same price point you have the Ninja 300 and the Yamaha R3, both of which are excellent highway mile munchers with far more refined twin cylinder engines and can sustain being revved high all day long and have a larger tank capacity. So why even bother looking at the GS if the purpose is only to ride on highways.

Cons
– Expensive
– Barely any mid range torque
– Not enough torque for 2up riding with luggage.
– Engine in the same state of tune as Apache 310RR which is a sportsbike.
– BMW service costs