BMW Motorrad India has launched their flagship cruiser motorcycle in India today. The Heritage-Series bike is BMW’s answer to motorcycles in the cruiser segment from Indian Motorcycles and Harley Davidson. It will also take on the likes of Ducati Diavel 1260 and the recently introduced Triumph Rocket 3 GT.

This is the first attempt by BMW to bring a traditional cruiser bike to India. Price of standard edition is Rs 18.9 lakhs and that of First Edition is Rs 21.9 lakhs, ex-sh. Mr. Vikram Pawah, President, BMW Group India said, “The all-new BMW R 18 is BMW Motorrad’s much-anticipated entry into the cruiser segment. Fans and motorcycling enthusiasts in India have been eagerly waiting for this day.”

BMW R18 draws its design inspiration from the 1965 R5 model with cues taken from the traditional swingarm, fuel tank, the exposed shaft-drive and exhaust pipes. Overall, its design resembles that of a conventional old-school bobber that sits on a double-cradle steel frame. The frame also covers the beautifully sculpted engine which highlights the impressive presence of the bike.

Its retro look gets further accentuated by a round headlamp, wide handlebars, an exhaust pipe finished in chrome and spoked wheels. BMW will be offering two variants of the R18- a standard completely blacked-out version and a First Edition with more white pinstripes and chrome. The First Edition will also feature further distinguishing elements such as a seat badge with a ‘First Edition’ clasp, a copper-lettered logo on the tank and a Blackstorm metallic paint job.

As far as performance is concerned, the R18 is powered by the largest twin-cylinder boxer motor of 1802cc displacement. This engine is capable of generating 91 bhp of power at 4,750rpm and 158Nm of peak torque at 3,000rpm. This unit is mated to a six-speed gearbox with a shaft drive setup. 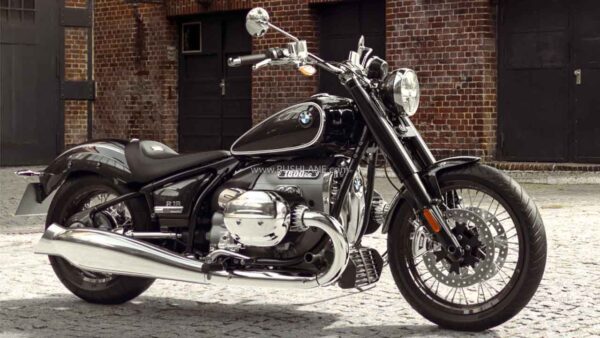 In terms of features, the upcoming cruiser gets an all-LED Lighting setup, an analog instrument cluster, heated grips and an optional reverse gear. The safety equipment consists of ABS, traction control, hill-hold assist and switchable Automatic Stability Control (ASC). The ACS is complemented by MSR which prevents the rear wheel slip in case of aggressive downshifting and acceleration. Additionally, it gets three driving modes- Rain, Roll and Rock.

While the high-end cruiser bike segment has not been very popular among the masses. However, BMW aims to attract a fair share of buyers who would definitely like to flaunt a premium bobber on the streets.