Weight Reduction isn’t just a catchphrase when you are working upon a fast car. It actually is the key to success. And things get way more serious when you are the producer of one of the fastest cars on the planet. Yes, we are talking about Bugatti, the ones who came up with the Veyron and Chiron.

Recently, Bugatti released an interesting video of their new 3D-printed titanium brake calipers. Now, you may think what could be special about a set of brake calipers, they are just there to stop the car, right? It is the powertrain which does the magic! Well, think about it again, it is these small pairs, 4, which actually manage to stop a 2-tonne machine from speeds which cross the 400 kmph mark to a standstill in just a handful of seconds. 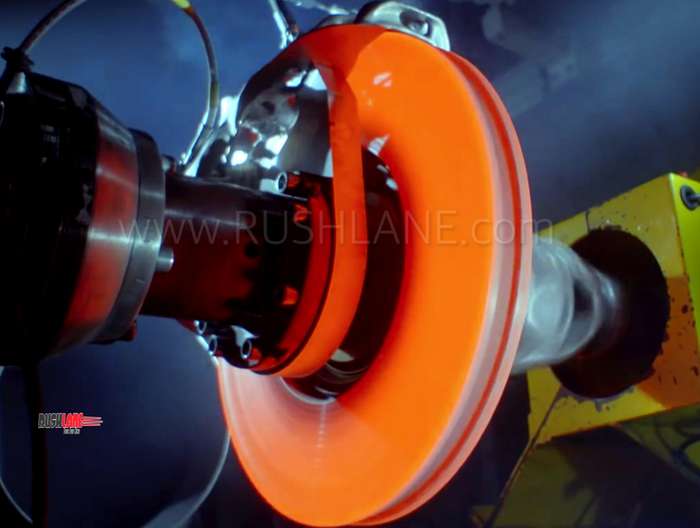 Now that we have reinstated the importance of the calipers, let us talk more about these and what makes them special. To begin with, these have been made with titanium and are in-fact the largest 3D-printed part made out of titanium. The caliper has eight pistons but still weighs just 2.9 kgs and happens to be 40% lower in weight when compared to the calipers which the current Chiron uses.

For the test, Bugatti engineers use the caliper on a brake disc which is being run by a motor. To take the testing to extremes, they apply brakes when the brake disc is rotating as fast as it would have had it been on an actual Bugatti doing 375 kmph. There is no surprise that the disc glows (talking about temperatures over 1000 degree Celsius) and sparks flies, but the disc comes to a halt. Watch the video below.

Even though the caliper has a lot of cut-out sections and holes (all for weight reduction), the unit does its job rather well. Later in the video, we can see Bugatti engineers removing the caliper from the test bed and there is no sign of any deformity, at all.

Now, it isn’t clear if these new calipers will come on the Chiron or Bugatti will save them for their next product, but what we know for sure is that these will certainly take both, performance and the cost one notch higher.