Alloy wheel vs steel wheel – Which one is stronger? Hydraulic press test video

In addition to having obvious benefits in the aesthetics department, the alloy wheels have few more advantages over the steel wheels. The alloy wheels aid in better ventilation of the braking system thereby reducing the chances of brake fade. Being lighter than the steel units, the alloy wheels lower the unsprung mass of the vehicle to some extent (improves driving dynamics by reducing wheel hops and increasing road holding). But do more expensive alloy rims have any disadvantages compared to the steel oneS?

Guys at the Hydraulic Press Channel (Youtube) subjected both alloy and steel wheels to a crush test in a powerful hydraulic press to see how they behave under extreme stress. To have a more accurate idea, more than one sample of each type has been tested, in both vertical and horizontal directions. 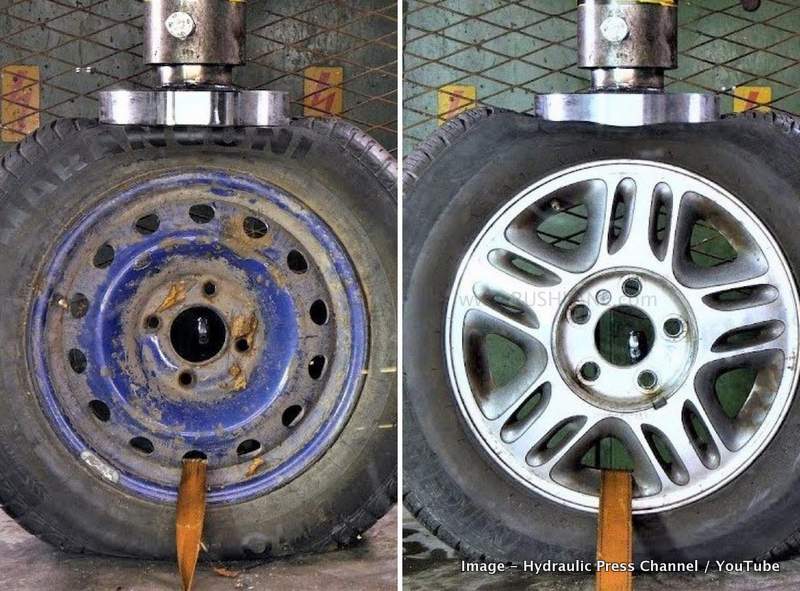 While the loading is gradual in the hydraulic press, it gives us a clear idea on how much force is required to achieve wheel failure. The press simulates hitting a dangerous pothole at serious speeds.

First up is the aluminium alloy wheel which demonstrated that it can withstand up to 20 tons of force before giving up. In real world conditions, the chances of a tyre-wheel assembly to witness such a high force is very unlikely but one should also consider the fact that the wheels are subjected to fatigue stress which brings down the failure limit significantly. The tests clearly indicate that when the alloy wheel does fail, it does so abruptly by shattering into pieces. The failure is even more violent when the force is applied in the lateral direction.

The steel wheel starts failing a lot earlier than the alloy wheel but it in stark contrast, it crumples gradually without breaking, thereby absorbing considering amount of the impact energy. So, in a pothole situation, the alloy wheels are stiffer but the cheaper steel wheels have a better shock absorbing ability.

A well designed alloy wheel with no manufacturing defects could take pretty much everything the roads can throw at it. That is why when you are upgrading to alloy wheels, it’s imperative to prioritize high quality rather than low price.