The COVID-19 pandemic which struck in March 2020 has had a devastating effect on automakers in India who were already facing constraints in terms of demand. The pandemic caused all car manufacturing plants to shut down production while dealers pulled down shutters.

Automakers have noted not only low demand in domestic sales but exports also fell during the April to June 2020 period. These lower sales were across every segment of automobiles be it commercial or PVs and across all segments of passenger vehicles as well.

Taking only passenger vehicle exports into account during the April to June 2020 quarter, SIAM – Society of Indian Automobile Manufacturers, has reported a 78 percent decline in total exports. Exports during this period stood at 43,748 units as against 1,73,045 units exported in the same quarter of 2019. 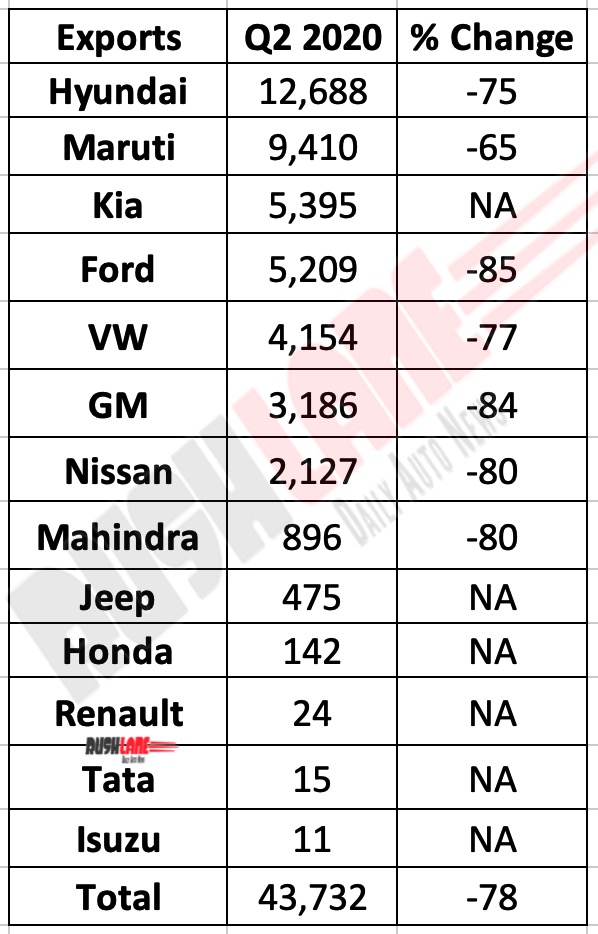 Despite a slow start to this financial year, the month of July appears to see some improvements which would hopefully go on to get better as the year progresses. Exports of passenger vehicles from India are mainly to countries of Latin America, Africa, Europe and Asia.

Taking into account exports of each automaker, it was seen that Hyundai Motor India shipped the most passenger vehicles during the April to June 2020 quarter. 12,688 units were shipped during this period down 74.73 percent as against exports in the same period of the previous year. Next in line were exports from Maruti Suzuki India Limited. The company exported 9,410 units in the past quarter, down 65 percent as against exports during the same quarter of the previous year.

Kia Motors, a comparatively new comer to the Indian automobile market has amassed exports of 5,395 units, thanks to Seltos. Ford India exports stood at 5,209 units, down 84.53 percent as compared to exports in the same quarter of the previous year. Volkswagen India also noted a decline in exports by 77.56 percent to 4,154 units. Exports from General Motors dipped 84.06 percent to 3,186 units while Nissan Motors announced a decline of 80.92 percent with 2,127 units exported in the April to June 2020 period.

Mahindra exports dipped 79.73 percent to 896 units while that of Fiat India (Jeep) dipped to 475 units and Honda Cars to 142 units in the quarter under review. Tata Motors shipped 15 units and Renault India exports stood at 24 units in the April to June 2020 period.