As the slowdown continues to plague the auto sector, most carmakers have registered negative growth in July 2019. Nine out of top ten carmakers by marketshare have witnessed significant reduction in sales in July 2019, as compared to same period last year. The only exception is Volkswagen that has registered marginal growth of 1.38%.

While slowdown is the primary cause for poor show of auto companies, there are other reasons as well. For example, launch of new products in the market has affected sales of older models. Bookings for recently launched Hyundai Venue have crossed 50k in just 60 days, which has majorly dented sales of Maruti Suzuki Vitara Brezza.

Another example is that of MG Hector, which is impacting sales of SUVs like Mahindra XUV500, Tata Harrier and Jeep Compass. It is also possible that many people are holding back their purchases in wait of newer models that are expected to be launched later this year and in 2020. 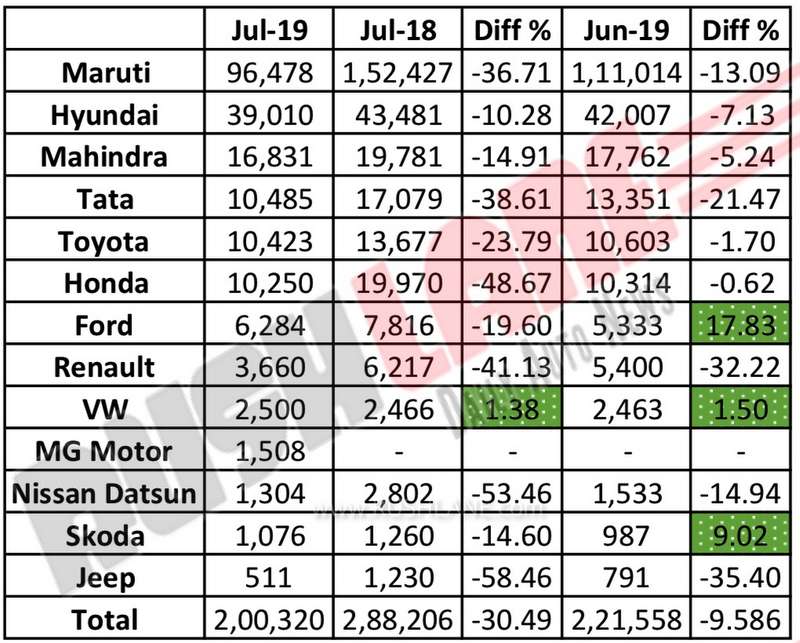 The silver lining amidst the chaos is that only the most competitive brands and products will survive these troubled times. The auto sector in India is also becoming more mature, as number 2 and number 3 carmakers have witnessed steady increase in their marketshare. It is a healthy sign, as mature auto markets are not heavily skewed in favour of a specific brand.

Earlier, Maruti Suzuki ruled the auto sector, but now the company is facing tough competition from new products launched by rivals. In July, Maruti Suzuki registered -36.71% decline in sales, which translates into -4.60% loss in marketshare.

Even though slowdown is taking a heavy toll on car sales, industry experts feel that things will eventually improve when there’s more clarity about government policies and easing of credit situation. It is also being hoped that the forthcoming festive season will boost consumer sentiments and help revive the auto sector.