More and more CF Moto prototypes have started surfacing in Hyderabad thereby strongly indicating that the Chinese two wheeler brand is close to announcing its Indian entry with local partner. Hyderabad-based Mahavir Group which recently relaunched the Benelli brand in India is our primary suspect but it is too early to state with certainty.

It is to be noted that CF Moto was actually supposed to make its Indian debut back in 2016 but its local partner Eider Motors invited trouble for scamming its dealers. Arrests were made and CF Moto faded into oblivion, only to resurface with new vigor three years later. 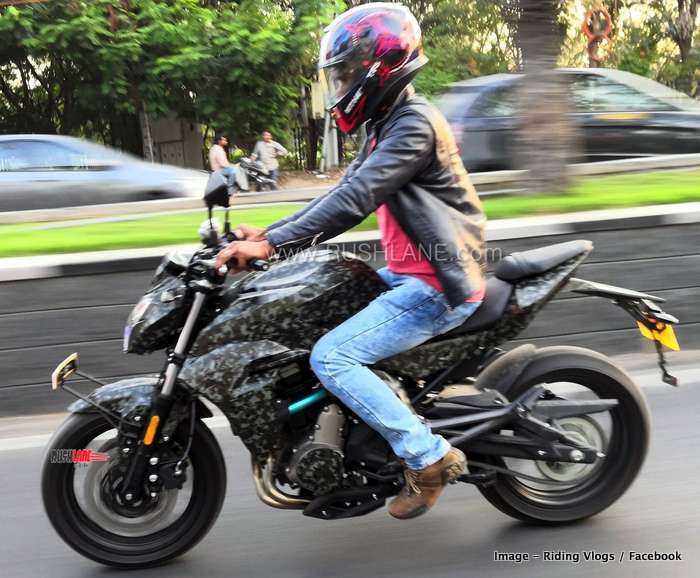 This time around, the Chinese brand appears to be more serious about its Indian operations as suggested by extensive testing of its prototypes. After the CF Moto 250NK naked street bike and the 650 MT adventure tourer, it is the 650NK which has been spotted. All bikes were spotted in Hyderabad, and were wearing similar camouflage.

A Youtube channel / Facebook page named Riding Vlogs has managed to catch the CF Moto 650 NK street fighter on tape. The closer look gives us a fair idea about the motorcycle’s build quality. Components like switch-gear appear to be at least at par with the segment standards of medium displacement motorcycles. The folks at Riding Vlogs even managed to speak with the test rider, which can be seen in the video below.

The CF Moto 650 NK is powered by a parallel-twin liquid-cooled 649.3 cc engine which 60 PS and 56 Nm of torque. The motor is paired with a 6-speed transmission. The street fighter has adequate performance on tap to satisfy riders who are stepping into the world of premium motorcycles. It has a claimed top-speed of 180 kmph.

Whoever is the Indian partner, the CF Moto range of motorcycles are most likely to be assembled locally out of CKD kits imported from China. The pricing would be absolutely crucial to make inroads in the promising medium displacement motorcycle segment which has been growing at an impressive rate. It will rival with the likes of Kawasaki 650 and upcoming KTM Duke 790.