Pickups are huge and are expected to have strong structure

GNCAP tests cars regularly from across the globe. In a recent test it tested the Steed 5 which is sold in South Africa. The Steed 5 happens to be a product from the stable of Great Wall Motors (which was also planning to enter the Indian market earlier this year), a Chinese automotive giant. For ones who aren’t familiar with the Steed 5, you may consider it to be a cheaper (and unsafe) look-alike of the Ford Ranger Pick-Up truck.

Global NCAP recently crash tested the Steed 5 and unsurprisingly the pick-up got a 0-star safety rating. It scored 0 points (out of 17) in adult safety, making it one of the unsafest car on offer today. A poor safety rating was expected for the Steed 5 as the base variant of the pick-up doesn’t even come along with ABS or airbags.

The pick-up was crash tested at just a speed of 40 mph (64 kmph) and in the video we can see that the driver dummy’s head smashes into the steering wheel, even though the seatbelt had been fastened. Global NCAP has further stated that in a post-crash investigation, they had found deformation in the passenger compartment and movement in the position of the steering wheel.

Such kind of deformations are relatively uncommon in 2020 and it raises serious doubts on the quality of construction and design of the chassis and structure of the Steed 5. Considering the overall analysis, Global NCAP isn’t sure if even the presence of airbags could have helped the pick-up to achieve a better safety rating.

The GWM Steed 5 costs around $13,000 and comes in multiple trim levels. The model which was crash tested was the base variant which had no safety gear. However, the SX trim comes along with dual airbags and ABS with EBD. Also, GWM had recently launched a new Safety version which also came with these basic safety systems.

What is concerning at the global level is OEMs have been very selective in providing enough safety gears to cars in developing countries. The discrepancy has come out wide in the open since GNCAP and its affiliates have started conducting tests of global models from the same manufacturer but for different markets. 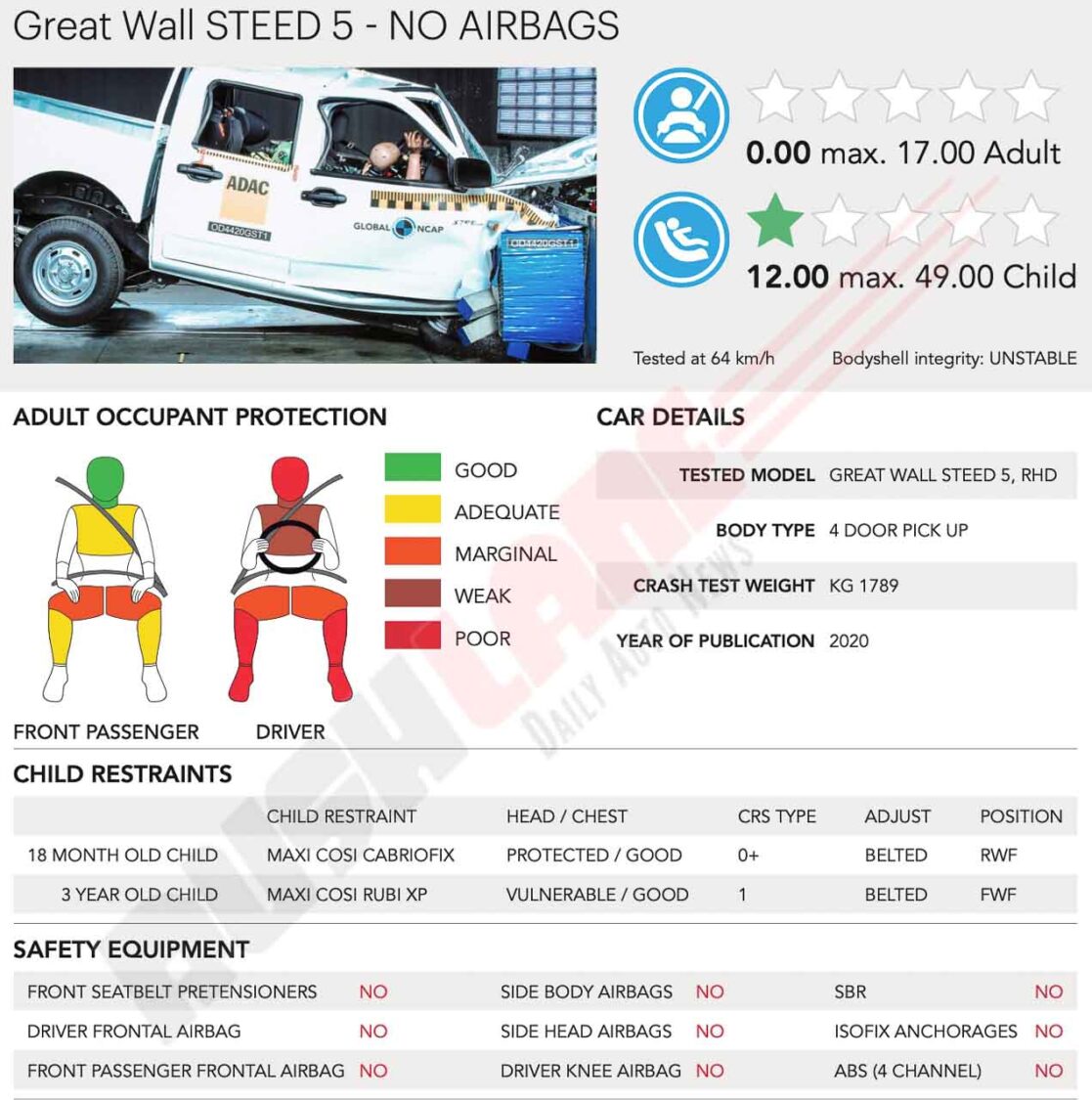 While costing, finances and profits are also critical for all businesses to survive and thrive, it is equally important to ensure that basic safety equipment are provided to their customers from across the globe and more importantly, without any discrepancy based upon the country.

In the Indian market, it is actually the Indian OEMs, Tata and Mahindra who have majority of their models in the safest cars in India list. Some of the names include XUV300, Nexon, Tigor, Tiago, 2020 Thar and Marazzo.