Apart from these, Citroen is also planning to launch a family MPV named Berlingo. A test mule of the same was spotted testing recently in Delhi. Images are courtesy Youtube channel Heat17. The MPV has been spied testing multiple times in recent months.

The MPV in these pics does not wear any camouflage except for concealed badges at front and rear. Based on the model sold overseas- Berlingo is offered in two variants- standard and XL. The former is a compact version of the MPV measuring 4.4 metres in length while the latter is an elongated variant measuring 4.75 metres. From the looks, the model in pictures is most likely the longer XL trim.

Its front fascia sports a similar look to its SUV sibling C5 Aircross which gets split headlight units and a shorter bonnet. On sides, it rolls on 16-inch steel wheels which are wrapped around by 205/60 rubber. It also features a higher waistline and sliding doors with side body cladding.

It receives a commanding view of the road ahead thanks to a raised driver’s position. At rear, it gets large vertically positioned taillamps, large windscreen and a tailgate mounted registration plate. The standard variant is offered in a 5-seater configuration while the XL derivative is offered in 7-seater as well as 6-seater configurations. The latter comes with captain seats in the middle row.

There are no images within the cabin, however, it is expected to be a rich experience due to loads of creature comforts present. This includes an eight-inch touchscreen infotainment system with Apple CarPlay and Android Auto connectivity, wireless phone charging, navigation and lots of storage space. 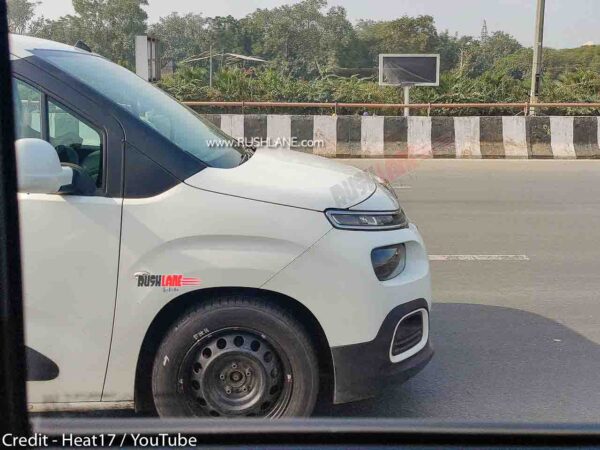 Internationally, Berlingo MPV is offered in a choice of two petrol and two diesel engine options. The 1.2 liter petrol unit is available in two states of tunes- 110 bhp and 130 bhp. The 1.5-litre DV5 diesel engine pumps out either 102 bhp or 130 bhp. Transmission is via 8 speed automatic, while the diesel unit also gets a 6 speed manual.

In India, the diesel engine is expected to be replaced by a 1.5-litre petrol mill. The 1.2-litre could power the standard variant while the 1.5-litre unit could power the XL variant. Whereas the former will rival Maruti XL6 and Mahindra Marazzo, the latter will take on Toyota Innova Crysta. It is to be noted that Berlingo is not part of Citroen’s ‘C-Cubed plan’ for India and if launched the country would most likely be brought as a Completely Knocked Down (CKD) unit just like C5 Aircross.