French automotive company Groupe PSA has been trying over the years to make its entry into the Indian market. It was all set to make its debut this year through its brand Citroen, however, all plans went haywire thanks to the outbreak of novel coronavirus.

The brand will make its debut with its flagship SUV Citroen C5 Aircross which has been spotted testing on a number of occasions previously. The SUV will be brought to India via CKD route which will be assembled in CK Birla Group’s facility in Thiruvallur in Tamil Nadu.

C5 Aircross will be followed by its subcompact UV which is internally codenamed CC21 has also been spotted on a couple of occasions previously. Latest images of a test mule of what appears to be CC21 have come across from Bangalore via automotive enthusiast Sunil.

Going by the images that have appeared earlier, the overall silhouette and rear profile look similar to CC21. This compact UV is set to be Citroen’s first locally manufactured vehicle in India and is set to hit markets most probably in the next festive season. CC21 is set to be the first car in India to use a powertrain based on a Flexi-fuel system. 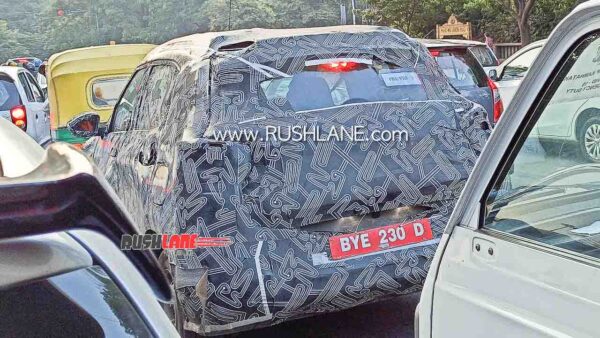 This car is expected to be powered by a 1.2-litre turbocharged engine that could run on petrol as well as ethanol blends (from 27% to 100%) – making it the country’s first biofuel car. Citroen believes that introduction of a Flexi-fuel system will give them the first mover’s advantage in this segment incase when emission standards will be upgraded to stricter levels.

Whatever we can gauge from the images, we can deduce that CC21 derives most of its design elements from a slightly larger European-spec C3 Aircross SUV. It is expected to sport two-part headlamps, a narrow front grille, rectangular secondary air-dam and a minimal rear fascia as characteristic Citroen traits. Inside the cabin as well, design elements are set to be inspired by C3 Aircross. Citroen CC21 flexifuel is expected to be priced aggressively in Rs 4-5 lakh bracket.

The test mule could also be the electrified CC21 which is codenamed eCC21. This electric car is rumoured to be one of the most affordable passenger electric vehicles (EV) at the time of its launch and will go up against entry-level EVs such as Mahindra eKUV100 and Tata HBX EV. Specifications of this model are yet to be known and things will get clearer ahead of its official launch which is expected to happen in 2022. Electric Citroen CC21 is expected to be priced in Rs 8-10 lakh bracket.

Both these models are part of Citroen’s C-Cube program which has been specifically designed for emerging markets like India. Cars under this program are said to be based on CMP (Common Modular Platform), the same architecture which underpins Peugeot 208, although CMP in India will have a high extent of localisation.