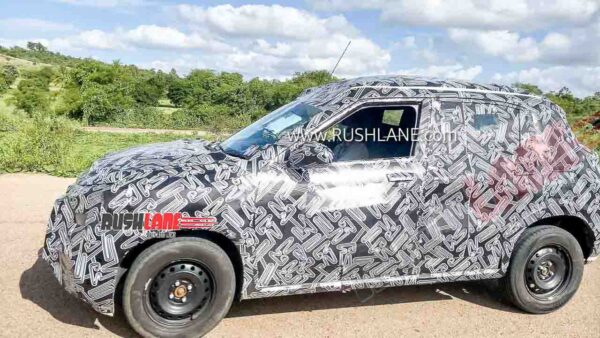 We came across the first example of these prototypes testing on a public a few months ago and we mistakenly identified it as the Nissan Magnite. Interestingly, the Citroen prototypes sport an identical camouflage design compared to its Nissan rival and this led to our confusion. Anyways, the Citroen mini UV for India seems closer to production than we originally anticipated. Some of these prototypes are being tested by ARAI, indicating that the homologation process is well underway.

The Citroen mini UV for India will be an important volume generator for the new coming which will soon start its top-down approach with the launch of C5 Aircross SUV. The latest spyshots indicate that the sub-4m Citroen C21 (codename) crossover prototype is sporting production-spec body panels.

While the finer design details are still under wraps, it can be observed that the compact crossover follows the French brand’s unique design language. The styling appears to be inspired by the slightly larger Europe-spec C3 Aircross SUV. Two-part headlamps, narrow grille, rectangular secondary air-dam, undramatic sheet metal design and a minimal rear fascia appear to be the salient design trains of the new Citroen mini UV.

We expect the crossover’s interior to borrow a lot of elements from the C3 Aircross. Going by the segment standards and Citroen’s desire for a premium positioning in India, we can expect the C21 to be equipped with a comprehensive touchscreen infotainment system, state-of-the-art connectivity features, automatic climate control and so on.

The Citroen mini SUV for India will be underpinned by PSA Peugeot Citroen Group’s new Common Modular Platform (CMP) which will cater to emerging markets like India and South America. This architecture will be heavily localized in India in order to arrive at a competitive price point.

The Maruti Brezza rival is reported to be powered by a 1.2-liter turbocharged petrol engine which produces 110 hp on board the Berlingo van which was also spotted testing in India. We expect the crossover to be available with both manual and automatic transmission options.

The Citroen mini SUV will be locking horns with the ever-growing list of sub-4m crossovers in the country including Maruti Vitara Brezza, Hyundai Venue, Tata Nexon, Mahindra XUV300, Kia Sonet, Ford EcoSport, and the upcoming Nissan Magnite and Renault Kiger. The French crossover will be built at the Thiruvallur manufacturing facility owned by CK Birla.